It is a beautiful day across most of the Alps, with deep blue skies and crisp but not excessively cold temperatures. The only exception is the far eastern Austrian Alps, where there is still some cloud and a few flurries to low levels. 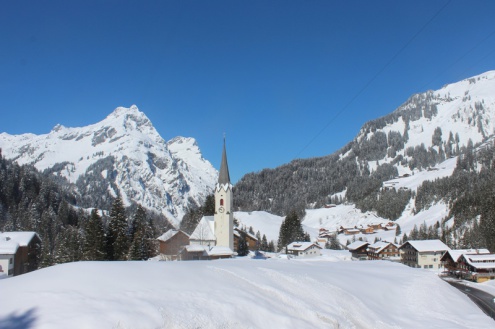 These residual flurries are the remnants of a northerly airflow that has been delivering plenty of snow showers to the northern Alps (particularly in the north-east) for several days now. For anyone lucky enough to be skiing in Switzerland or Austria right now (the only two countries where publicly accessible lift-served skiing is currently permitted), snow conditions are excellent for late March.

Fine weather is expected to continue across most of the Alps over the next couple of days before it turns briefly more unsettled again towards the end of the week, with a little snow for some, and during the first part of the weekend.

As expected, huge quantities of snow have fallen across the northern half of the Alps this week during what has proved to be one of the biggest storm cycles of the winter. 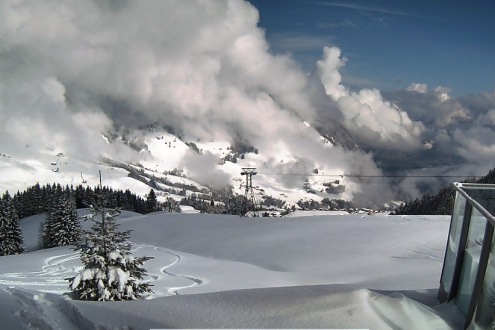 The biggest snowfalls have been in the central/eastern Swiss Alps, roughly in a triangle between Engelberg, Andermatt and Laax, where nearly 2m of new snow has fallen since Saturday.

Many other northern parts of the Alps have seen well in excess of 1m of new snow at altitude, including the northern French Alps (e.g. Flaine, Chamonix), much of the central and northern Swiss Alps (e.g. Crans Montana, Mürren, Engelberg, Laax) and the northern and western Austrian Alps (e.g. Lech and resorts close to Innsbruck).

Some Italian resorts (e.g. Cervinia, Courmayeur, Livigno) have also seen significant snow but, on the whole, the southern Alps have seen much less or even no snow at all. With the weather coming from the north this week, the rain/snow limit has generally been low, mostly below 800m.

Today many parts of the Alps will be dry and cold with variable cloud cover, with a few flurries still possible here and there, chiefly across the northern Austrian Alps (e.g. Kaprun) then later across the south-western Italian Alps (e.g. Sestriere).

Over the next few days snow showers will continue to affect many eastern parts of the Alps, especially the northern and eastern Austrian Alps (e.g. Obertauern), with further moderate accumulations in places. Elsewhere, many places will be dry with variable cloud cover and just a few flurries here and there, especially in the southern Piedmont (e.g. Sestriere). Temperatures will be below average for late March right across the Alps.

As expected, winter returned to the Alps over the weekend with significant snow for some, especially in the north-western Alps. It will now continue to be wintry all week, with further heavy snow due across the northern half of the Alps. 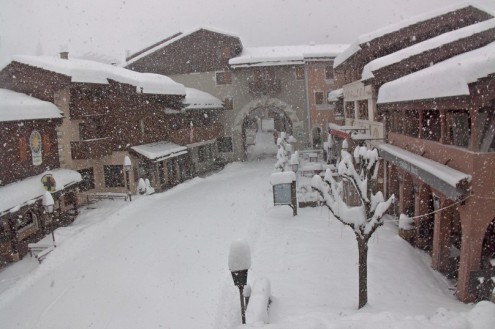 Heavy snow in Valmorel in the French Savoie this morning – 15 March 2021 – Photo: valmorel.com

Between 30cm and 50cm of new snow has already fallen above 1500m this morning across quite a wide swathe of the northern and north-western Alps, with 50cm at altitude in Crans Montana and Engelberg, for example.

Another 30-40cm of snow is possible today across these same northern and north-western regions, including the northern French Alps (e.g. Flaine, Avoriaz), most of Switzerland (away from the far south), and western Austria (e.g. Arlberg). The rain/snow limit will generally be very low, briefly rising to around 800m this afternoon before falling again overnight.

With this cold and unstable northerly airflow expected to persist for several days, storm totals could reach 100-120cm in places by Thursday. By contrast, the southern half of the Alps will see much less snow over the next few days. Some border areas (e.g. Cervinia) will see significant accumulations, but many southern areas will miss out this time around.

After weeks of very mild and relatively dry weather in the Alps, a major change is underway with big snowfalls expected across many northern and western parts over the next few days. 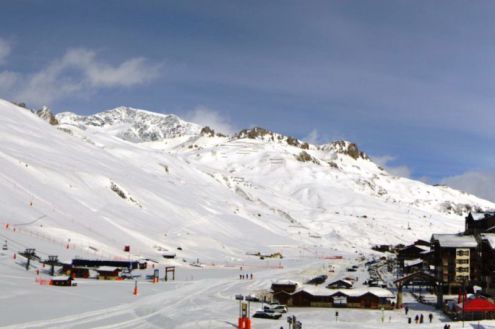 Plenty of snow still in Tignes, with lots in the forecast over the next few days – 12 March 2021 –Photo: tignes.net

Some snow has already fallen across some north-western parts of the Alps over the last 24 hours, with around 20cm above 2000m close to the French/Swiss border, for example. The real action will begin late on Saturday, however, when an active cold front is set to push down from the north-west, heralding several days of cold and very unstable air which will deliver large snowfall totals to many northern and north-western areas.

Areas including the northern French Alps (e.g 3 Valleys, Portes du Soleil), much of the Swiss Alps, especially in the north (e.g. Jungfrau region, Engelberg, Laax), and the northern and western Austrian Alps (e.g. St Anton) can expect between 40cm and 100cm of new snow above 1500m by the middle of next week, with up to 120cm in places (e.g. Arlberg region). The rain/snow limit will start at around 1200m on Saturday before lowering to around 500m on Sunday and remaining low next week.

Throughout this period the southern Alps will see much less snow, with some places staying completely dry.

There is quite a lot of cloud drifting around the Alps today, and while many places will stay dry, there will be a few light showers here and there with snow above 900-1200m. Some sunshine is also expected but it will be a bit hit and miss. 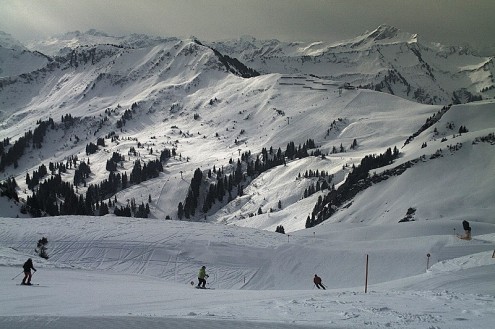 Cloudy but with reasonable visibility in the Austrian Vorarlberg this morning. This is Mellau – 9 March 2021 – Photo: mellau.at

Wednesday will see a few showers or flurries to relatively low altitudes in the eastern Alps (notably in Austria) while the central and western Alps enjoy a mostly sunny day. On Thursday, Atlantic weather fronts will arrive from the west heralding a much more unsettled spell of weather in the Alps with more significant and widespread snow than we have seen recently.

The new storm cycle will have two peaks of precipitation, the first on Thursday night/Friday morning in the western Alps, notably in France and western Switzerland, where 15-30cm of new snow is expected above 2000m in resorts such as Val d’Isère and Verbier. It won’t be cold though, with rain to start with lower down (especially on Thursday night).

After a relative reprieve, there may be a more pronounced spell of snow across the northern Alps over the weekend. With much colder air moving down from the north, the rain/snow limit will be lower, dropping to 500m or less by Sunday. The most snow from this second peak will fall in resorts such as Avoriaz, Mürren, Engelberg and Lech, where another 30cm of snow can be expected above 1500m by the end of the weekend.

This snow will be welcome news for anyone lucky enough to be able to ski in the Alps right now (note that lift-served publicly accessible skiing in the Alps is still only available in Switzerland and Austria). While there has been a bit of new snow across some parts of the Alps in the last few days (with 20cm or so in the north last Friday, for example), the weather in the Alps has generally been very spring-like since the beginning of February, meaning that a lot of the snow at low altitude has now disappeared.

Updated: 10am Wednesday 3 March 2021 - Still mild in the Alps, but with snow for some northern parts later in the week…

There is a lot of cloud across the Alps today, especially in the west, but temperatures are mild with maximums between 10°C and 15°C in the lower valleys. The best of any sunshine will be in the far eastern Alps. 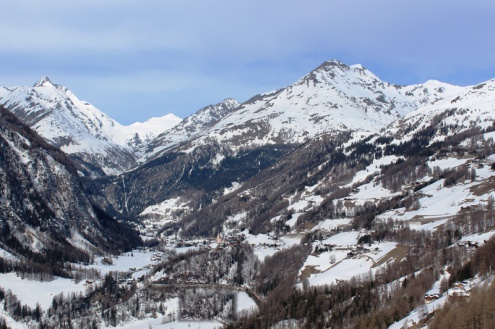 On Thursday, a cold front will move down from the north bringing showers to the northern Alps later in the day, with the rain/snow limit falling to between 1000m and 1500m. Showers will continue in some northern Alpine regions on Thursday night and into Friday, with between 5cm and 30cm of new snow expected in the northern Swiss Alps, and the northern and western Austrian Alps (e.g. Arlberg).

The northern French Alps and the entire southern half of the Alps will see very little if any snow, however. The sun should return to all Alpine regions on Saturday.

The new snow at the end of the week will make it feel a little more wintry again in some northern parts of the Alps. However, several weeks of very mild weather has now taken its toll on the snow-pack which, off-piste at least, is now quite fragmented at low altitude.

Nearly all other Alpine regions have below average snow depths for the time of year, quite a contrast from the end of January when nearly all areas were considerably above average.