A major storm is set to bring significant snow to most parts of the Alps over the next 48hrs or so. This storm is forming over the Gulf of Genoa but is drawing in increasingly cold air from the north/north-east, meaning that snow will settle to very low levels in the northern half of the Alps this weekend.

With the centre of the storm so close to the Alps, it is very difficult to say exactly where the most snow will fall though just about all parts of the Alps are in with a chance of seeing some significant accumulations by the end of the weekend, with typically 20-40cm above 1500m but over 50cm in some favoured spots.

Note that strong winds are also likely in some parts of the Alps at times over the next couple of days, which could hamper lift operations and add to the generally increasing risk of avalanche.

Saturday will remain cloudy with further snow at times in all areas, probably heaviest in the south (Osttirol, Carinthia), with a rain/snow limit of around 400m in the north, but closer to 800-1000m in the south at first before dropping later. 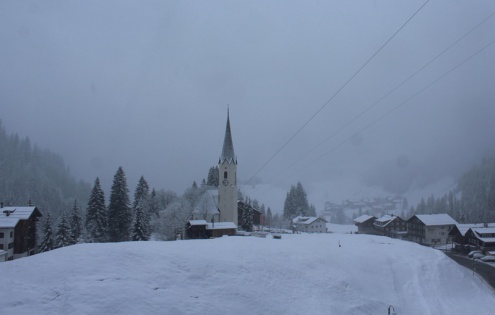 Snowing to relatively low levels in the Austrian Vorarlberg this morning. This is Schrӧcken at 1250m – 1 April 2022 – Photo: warth-schroecken.at

Friday will be mostly cloudy in the French Alps, with showers or longer spells of snow, heaviest in the northern Alps at first but with some significant snow possible in the southern Alps too later in the day, especially in the far south-east (e.g. Isola 2000). The rain/snow limit will sit around 400-600m in the north, but 1000m or higher in the far south to start with, lowering later.

Saturday will remain mostly cloudy with mostly light flurries to low altitudes, dying out in the far southern Alps later. The heaviest snow will fall close to the western foothills (e.g. Vercors, Chartreuse).

Sunday should be drier with the possibility of a few sunny spells. However, some flurries are likely to return later in the day, especially in the south. It will remain cold but will probably be a little less windy.

Friday will be mostly cloudy in the Italian Alps. It should start out dry in the south-west (e.g. Milky Way) but it will be snowing from the word go further east, especially in the central northern Italian Alps (e.g. Livigno) where the rain/snow limit will be around 1200-1500m, falling later. Later in the day and overnight heavy snow may also affect the south-west (e.g Sestriere) meaning that all Italian resorts should benefit from some significant snow by Saturday morning.

Saturday will be mostly cloudy with occasional light flurries with a rain/snow limit of 800-1200m, dropping later. The far eastern Italian Alps (i.e. Dolomites) may, however, see some more substantial snow later in the day.

Sunday will be drier and brighter in most regions for a time, though light snow showers (to low levels) are likely to return to many parts of the Italian Alps later in the day. 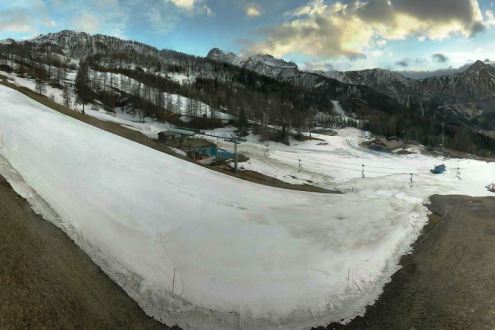 Friday will be mostly cloudy in the Swiss Alps, with showers or longer periods of snow. The best chance of any drier interludes will be in the south (Ticino). The rain/snow limit will generally sit between 400-600m, but between 1000-1200m in the south-east (e.g. St Moritz).

Saturday will be cloudy with further frequent snow showers across the northern Swiss Alps (e.g. Jungfrau region, Engelberg). The further south you go, the less frequent any showers will become, with some good sunny spells in the far south (Ticino). The rain/snow limit will sit around 400-600m, but a little higher in the south.

Sunday will see flurries continue to low altitudes across the northern Alps while it will again be drier and brighter the further south you are.

Monday should see a relative reprieve in the weather, with sunny spells and milder temperatures for most of the Alps.

Weather fronts will never be far away though, with some showers likely in places on Tuesday and Wednesday (snow 1200-1600m), and more widespread and persistent snow likely to return to the Alps later in the week. Watch this space…