Nothing shapes your impression of a ski area quite like the conditions you encounter on the slopes. Rightly or wrongly, the quality of the snow (never mind the state of the weather) can make or break your holiday, particularly if it is your first time in a resort.

Experienced skiers may have preconceived ideas about where to find the best snow. France's Espace Killy (Val d'Isère and Tignes) for instance, is often considered the safest bet in Europe, and with some justification. Austria's Arlberg (St Anton, Lech / Zürs) also has a big reputation, but for very different reasons. Understanding these differences, and other factors in the "snow quality equation", should allow you to make a more informed choice as to where and when you next hit the slopes.

Ultimately, your impression of the snow will come down to the quality of the surface you ski on. But before this happens, it needs to snow and what snow that falls needs to stay...﻿﻿﻿

Snowfall is a subject of great conjecture yet is the least predictable of the various factors that make up the snow quality equation.

There are many misconceptions; not least that there is a direct link between snowfall and altitude. In fact, position relative to or within a mountain range is far more significant.

It may surprise you to learn that Megève (1113m) gets more snow than either Saas-Fee (1800m) or Zermatt (1620m), at least at resort level. This is down to its location on the north-western fringes of the Alps, the direction from which the heaviest snow arrives. Both Saas-Fee and Zermatt (Switzerland) are set deeper in the Alps with more shelter from snow bearing systems.

Megève's (France) location is, however, a double-edged sword. It may boast impressive natural snowfall, but must also face impressive natural rainfall – due to both its modest altitude and exposure to mild westerly winds. Even when it's not raining, Megève is less able to "ride out" a mild spell than a resort of similar altitude set further into the mountains. 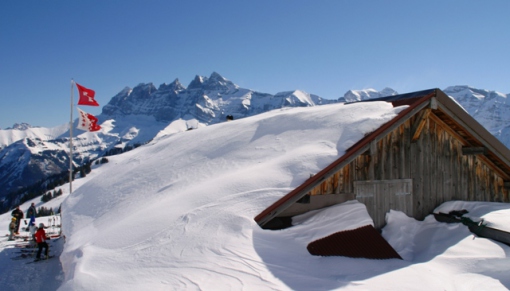 The resorts with the greatest snowfall are therefore those that are both high and close to the northern or western periphery of the Alps. Such resorts include Avoriaz (France), Lech / Zürs (Austria) all of which receive above or around 8m of snow at village level.

Resorts on the southern side of the Alps such as Serre Chevalier (France), Sauze d'Oulx, Cortina (Italy) or St Moritz (Switzerland) have more erratic snowfall and rely on storms tracking further south than normal or forming over the Mediterranean.

It rarely snows heavily right across the Alps at the same time, and a snowy spell on one side often means a dry(ish) spell on the other.

Clearly how much snow falls is important, but snow retention is even more so. Many resorts considered reliable for snow have relatively modest annual snowfall, but what snow they do get tends to stick around. 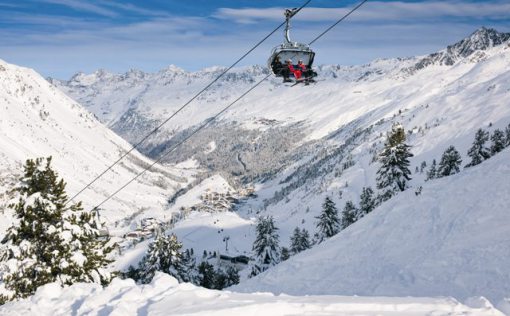 Deep snow does not always mean good snow, especially late in the season.  Assuming there is reasonable cover, your skiing enjoyment is most likely to be influenced by temperature and the effects of the sun, and not by snow depth (with which we are all too often obsessed).

Early season skiers often complain of hard and icy pistes.  Temperatures are often low, as is the sun in the sky.  The sun therefore does not have sufficient power to soften the surface to any degree.  Changes in temperature will have some effect on the snow, but at this time of year regular snowfall is the key to maintaining good quality pistes.

Later in the season, as the sun climbs higher, the situation is complicated.  Fresh snowfall is of course always welcome, but other factors come into play.  Bit by bit the strength of the sun takes on as much importance as the ambient temperature and snow quality changes more quickly.  Fine spring weather usually means early ice and late slush but, somewhere in-between, a period of decent skiing.  At such times, a local guide can be extremely useful in chasing the best snow around the slopes.  This window of decent snow will last longest on high north-facing slopes, but can pass in a matter of minutes on lower, south-facing slopes. 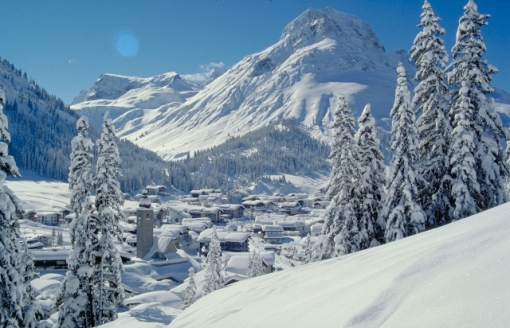 Rain is never welcome.  Less obvious perhaps is that even dry, cloudy weather is also a late season curse, trapping and storing heat close to the earth's surface.  Cloudy nights do not allow a proper re-freeze, and conditions will be poor even before the sun has hit the slopes.  By day, cloud can actually accelerate the thaw, especially if the day has begun warm and sunny.  This scenario often catches skiers by surprise, transforming pleasant spring snow into treacherous slush in a matter of minutes.

Careful grooming not only improves the quality of snow, but also prolongs the longevity of the snow pack.  In the Alps, resorts like Courchevel (France) and Lech (Austria) are renowned for their piste maintenance. Others, like Val d'Isère (France) and St Anton (Austria) are more casual.  Gradient is also a factor.  Gentle slopes hold their snow much better than steep ones, in terms of both quality and quantity.  Nowhere is this more evident than on the green runs back into Courchevel 1850 (France). 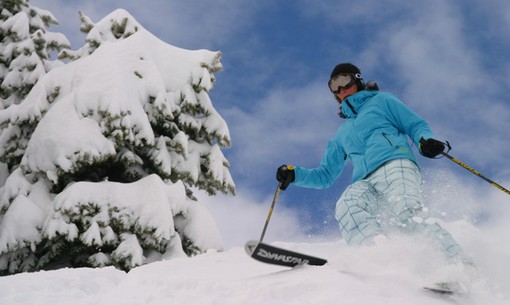 Glacier skiing aside, a handful of European resorts open in late November, the rest in December.  Aided by artificial snow, many North American areas aim to be operational well before this, with resorts as diverse as Killington (Vermont) and Keystone (Colorado) offering skiing as early as October in their quest to be first!  Generally speaking though, skiing before Christmas is unreliable, and even the highest resorts sometime struggle.

January is often the coldest month, but not necessarily the most snow-sure.  Conditions can be excellent of course but resorts are still often in the process of building up their base and in leaner years, those with rocky terrain (such as Zermatt or Crested Butte) may still be struggling to open their steepest terrain.

February is the month most likely to offer optimum ski conditions on both sides of the Atlantic.  The base has had time to build up, but the sun is not yet strong enough to adversely affect the snow.

By March, the days are getting noticeably longer and, in a normal year, snow cover is rarely a problem.  However, lean years may see lower and/or south facing slopes become patchy.  Warm spells will lead to a more general deterioration of snow quality, regardless of snow depth, especially during the afternoon.

April is notoriously unpredictable in the Alps.  Balmy spring days can be interrupted by brief but powerful surges of polar air bringing snow to surprisingly low altitudes.  Fresh snow quickly melts where the base has already disappeared but, higher up, April can bring some wonderful conditions.  North America can also see favourable April conditions, although many Colorado resorts are closed by mid-month regardless of snow cover.

By early May, the last of the main European areas are closing, but some US and Canadian resorts continue to operate, including Whistler, Snowbird and notably Mammoth, which can stay open as late as July!

Reading between the lines 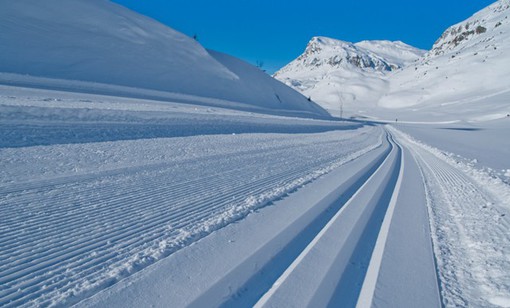 Once the season is underway, keeping track of snow conditions presents an altogether different challenge to anticipating them. Internet sources are seemingly unlimited, yet many sites share the same information.

However, snow depth figures alone should be treated with caution as they usually come from tourist offices and are unregulated. "Tricks of the trade" include taking "lower slope" readings halfway up the mountain, or simply measuring depths in areas where snow has been piled up. Regular editorials and reviews help to iron out some of these inconsistencies.

Webcams can be a useful tool for getting a feel for snow conditions, but should also be treated with caution. Always check that the images are live or at least recent. Some webcams conveniently fail to update at the first hint of greenery! Others are pointed up the mountain so images are always above the snowline.

North America has a stronger culture for monitoring snowfall than in Europe, and every resort publishes seasonal averages. However, unlike in Europe, most figures refer to the mid or upper mountain, not the resort. This would seem to make more sense, but it is worth noting that whilst Winter Park, one of Colorado's snowiest resorts, may claim around 9m up top, it only gets 5.5m at village level - similar to Val d'Isère, and a lot less than Avoriaz or Lech.

In Europe, snowfall figures are not widely published and are less reliable.  Measurements often relate to the resort but can relate to various points on the mountain. Some resorts measure snowfall over the year, others just from December to March, some have averages going back 30 years, some just 10 years or less. For this reason, average snowfall comparisons should be treated with caution - and, as such, are not the primary factor in our assessment of snow conditions in European resorts.