Today in the Alps...

Some parts of the Alps have woken up to fresh snow this morning, with significant quantities in the higher resorts of the southern and western Alps, especially close to the borders between Italy and France, and Italy and Switzerland. 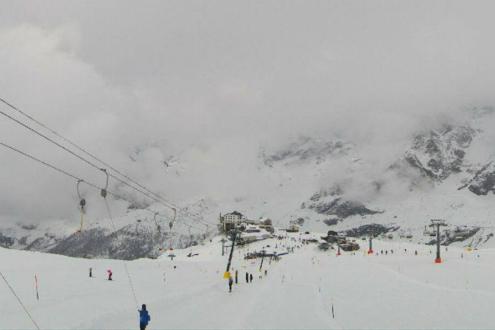 Resorts that are still open and have benefited from this late snow include Val d’Isère/Tignes, Cervinia, Zermatt and Saas-Fee.

The next few days will see the weather in the Alps remaining relatively cool and unsettled, with further bits and pieces of snow possible just about anywhere, albeit generally in modest quantities. That said, anyone lucky enough to be skiing in the Alps next week should be able to find some good late season snow conditions, particularly if they take advantage of any break in the weather.

The best places to ski in the Alps this week include Val Thorens, Tignes, Val d’Isère, Zermatt, Saas-Fee, Engelberg, Cervinia, Livigno, Ischgl, Sölden or indeed any of the Austrian glaciers (e.g. Hintertux, Kaprun).

Snow reports and forecasts will be back in Autumn 2022

Our complete guide to:

Our complete guide to:

Weather and snow conditions in Scotland 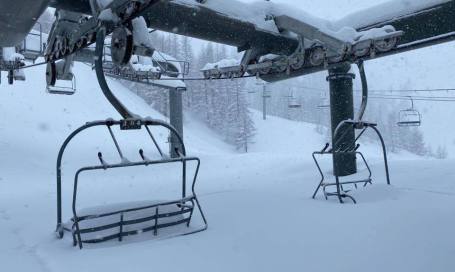 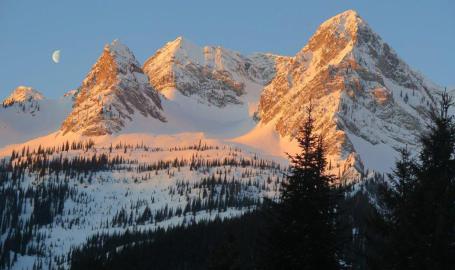 The 2020-21 ski season saw generally below average snowfall in North America, but who got the most snow? 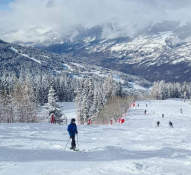 Les Arcs boasts some of the finest and most famous pistes in the Alps. Here are five of our favourites... 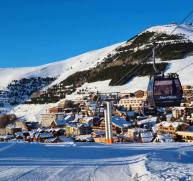 Alpe d'Huez - one of the best all-round ski resorts in the Alps?

With extensive, varied terrain for all levels of skier, Alpe d'Huez has something to offer everyone... 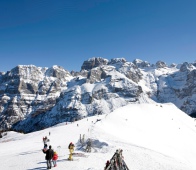 Here are our top 5 ski resorts for an early season ski holiday in Italy... 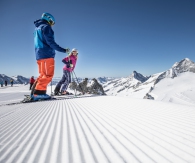 Here are our top 5 ski resorts for an early season ski holiday in Austria...

Our complete guide to... 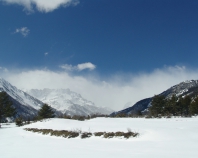 Snowfall patterns in the French Alps

Ever wondered why some areas of the French Alps get more snow than others?

The weather in the Alps has turned cooler, especially in the east (Austria) where there are even a few flurries around today above 1000m, mostly to the east of Innsbruck. 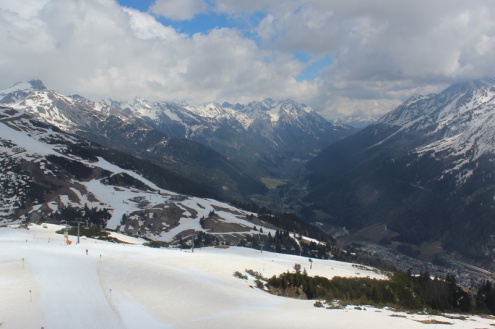 This follows a warm week of weather in the Alps, which started with deep blue skies on Monday but then became very hazy mid-week as a new wave of Saharan dust moved up from the south. This Saharan episode may not have been as marked as the one a few weeks back, but it still prevented solid overnight refreezing of snow in many areas, leading to the pistes becoming slushier earlier in the day than they would have under completely clear skies.

The colder weather that has now moved in from the east this weekend will improve snow quality, especially in the eastern Alps (e.g. Austria) where freezing levels this weekend will be unusually low for mid-April – around 1700m this afternoon in Obertauern, for example.

Next week, the weather looks like it will be fairly unsettled and relatively cool, with bits and pieces of snow just about anywhere in the Alps (above 1500-2000m or so).

If you are still thinking about grabbing a very late ski holiday in the Alps this year, recommended resorts include Val d’Isère, Tignes, Val Thorens, Zermatt, Cervinia, Saas-Fee, Kaprun, Obergurgl, Sölden and Hintertux.

The weather in the Alps remains very unsettled. Today will be cold and windy with snow showers to low levels across the northern half of the Alps before things settle down again tomorrow. 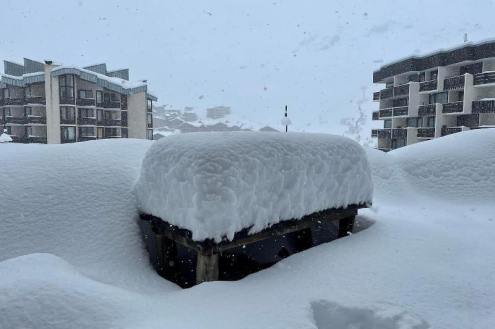 Today, around 5-10 cm of snow is generally expected in the northern French Alps (e.g. Avoriaz, 3 Valleys) and 10-15cm (with 20cm in some spots) across the northern Swiss and Austrian Alps (e.g. Mürren, Engelberg, Klosters, Lech, Kaprun). The southern Alps will see little if any snow.

Some flurries will continue to low levels in the Austrian Alps tomorrow but for most regions it will be dry with good sunny spells. It should remain mostly sunny early next week, also turning much warmer. However, there is the threat of another Saharan dust storm which could make the sky very hazy at times.

Snowfall totals above 2000m from the current storm will be in the range of 40-70cm across a wide swathe of the north-western Alps by the end of today, with 100cm or more in places in the northern French and extreme western Swiss Alps (e.g. Tignes, Val Thorens, Chamonix and Glacier 3000).

It did rain a lot yesterday below 2000m though, meaning that any improvements to conditions at low altitude will be very limited and/or temporary. The eastern Swiss and Austrian Alps will have seen more like 20-40cm at altitude by the end of Saturday while the southern Alps largely missed out.

So, anyone who will be in a high French resort (such as Val d’Isère, Tignes, Val Thorens or La Plagne) this week has lucked out, with the prospect of some particularly good skiing tomorrow (Sunday) and Monday.

The picture is more mixed lower down and further south and east, however, and with the advent of much warmer temperatures and some Saharan dust in the mix, snow conditions will start to suffer across the board as the week progresses!

The weather in the Alps has turned stormy in recent days, especially in the west where snowfall totals are becoming very significant at high altitude. 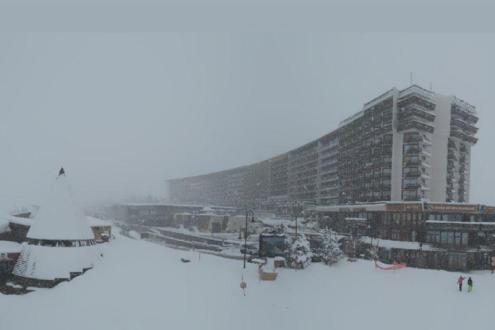 Heavy snow in Tignes this morning where storm totals (at altitude) could reach 1m by tomorrow – 8 April 2022 – Photo: tignes.net

We have already seen more than 50cm above 2200m in the northern French Alps (e.g. Tignes, Chamonix) and the far western Swiss Alps (e.g. Glacier 3000). Yesterday the rain/snow limit was close to 1500m but today it has risen to between 1800m and 2000m, meaning that heavy rain is now a problem lower down (e.g. Morzine, Villars).

Further heavy rain or snow is expected across the French Alps (away from the far south) and the western Swiss Alps for the rest of Friday and into Saturday. The rain/snow level will remain quite high (close to 2000m) until the early hours of Saturday morning at which point it will lower steadily, reaching very low levels (400m) later in the day.

Snowfall totals between Thursday and Saturday could reach over 1m above 2300m in some parts of the northern French Alps, including Tignes, Val Thorens and Chamonix. However, the storm will be less potent the further east and south you are, with 10-30cm more likely at altitude across the eastern Swiss Alps (e.g. Klosters) and the northern and western Austrian Alps (e.g. St Anton, Kaprun).

The bulk of the precipitation in the more north-eastern parts of the Alps will come on Saturday though, when the cold air starts to dig in, meaning that rain will be less of an issue here than in the north-western Alps.

Throughout this storm the southern Alps (e.g. Livigno, Selva) will only see patchy precipitation.

The weather in the Alps is turning more unsettled again as Atlantic weather fronts approach from the west. Today many areas are still quite sunny, but cloud will thicken across the western Alps with some showers (snow 1600-1800m) in the northern French and western Swiss Alps later in the day. 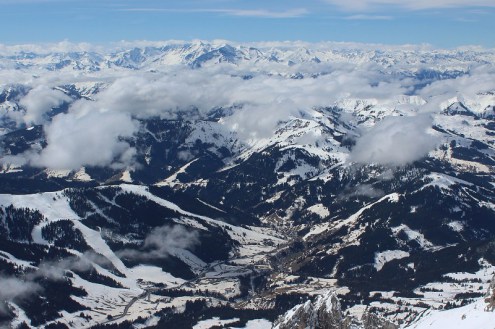 Fine today in the Hochkönig area of Austria but snow is expected this weekend – 6 April 2022 – Photo: hoechkoenig.at

On Thursday and Friday, these Atlantic weather fronts will deliver a lot of snow at altitude across the western Alps, especially in the northern French Alps (e.g. Espace Killy, 3 Valleys, Grand Massif) where 50cm or more of fresh snow is possible above 2000m. It will be quite mild though, with a rain/snow limit between 1600m and 2000m, and perhaps even higher in places, meaning that rain will be an issue lower down.

The weather will then remain unsettled over the weekend, with snow descending to lower levels and becoming more prevalent across the northern Alps as a whole. Other parts of Switzerland and Austria away from the south, including resorts such as Engelberg, Klosters, St Anton and Kaprun, will therefore also see significant snow on Saturday and Sunday. It is then set to turn drier and warmer again right across the Alps early next week.

So far this week snow conditions in the Alps have been good for early April, but they will become much more mixed over the coming days.

After a period of nearly six weeks without any significant or widespread snow, all parts of the Alps have finally seen significant snowfall over the last two to three days which has greatly improved snow conditions across the Alps, temporarily at least. 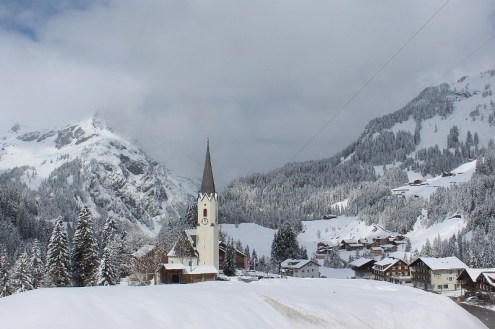 Unlike most big storms which tend to particularly favour one side of the Alps over the other, this latest storm delivered significant snow to virtually all parts of the Alps within a 48-hour period. This usually only happens when storms develop close to or over the southern Alps (rather than sweeping through the Alps from one direction) and then meander slowly north and/or east before they finally dissipate.

Several distinctly different areas did particularly well in this instance, with 50cm+ falling in areas including the Vercors and Belledonne regions in the western French Alps (e.g. Lans-en-Vercors, Chamrousse), the border areas between the southern French and Italian Aps (e.g. Isola 2000) and the northern Swiss Alps (e.g. Jungfrau region).

A lot of cloud continues to linger across the Alps today, with most areas remaining dry, although a few flurries are expected to low altitudes here and there, becoming more widespread across the southern Alps for a time this evening and overnight.

Monday will be a great day to be skiing in the Alps - not only has there been plenty of fresh snow everywhere in recent days, but it will also be mostly sunny and still relatively cool. On Tuesday a weakening warm front will introduce cloud and a little rain/snow to the far northern Alps, otherwise most of the Alps will be dry, with the best of any sunshine the further south you are.