The complete guide to...

Early season skiing in the Alps can sometimes be seen as a risky business, especially if you look at the way some seasons have started in recent years. But is a ski holiday at the start of the season really that much of a gamble?

While there are never any guarantees, of course, the media does tend to blow things out of proportion and, even in the worst of years, there is often more skiing available than they might have you believe.

The important thing is to have realistic expectations of an early season ski holiday. One thing that is for sure is that you are less likely to encounter any crowds - so choose your ski resort with a little care and, who knows, you might just have the time of your life!

So what do we mean by “early season” skiing?

Skiing in the Alps is possible throughout the autumn. However, until about the middle of November nearly all the action takes places on the glaciers.

Very occasionally, some non-glacial terrain may open as early as mid to late October but, generally speaking, you need to wait until mid to late November for “proper” skiing to get underway - even then, it may only be in a handful of resorts.

The majority of ski resorts in the Alps don’t actually open until December.

Skiing in the Alps in October is mostly restricted to the glaciers.

Very occasionally, early snowfalls combined with intensive snow-making will allow a handful of non-glaciated areas to open, but these will be very limited in extent.

Some entirely non-glacial ski areas that have opened in October in recent years, include Sulda in the Sud-Tirol in Italy, and Kitzbühel (Restehöhe sector) and Schladming;(Planai sector) in Austria. For more serious and reliable skiing, however, you really want to be visiting one of the main glaciers. 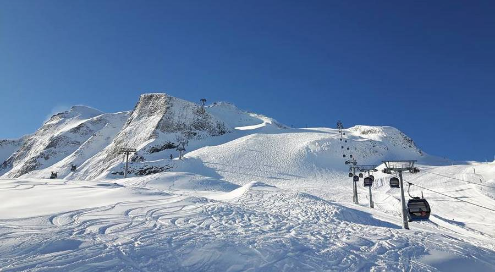 Hintertux offers some of the best year-round glacier skiing in the Alps.

In France, your options are limited to Tignes (normally open by mid-October) and, on occasion, Les 2 Alpes (open for the October half term week(s) only).

In Switzerland, the best options are Zermatt and Saas-Fee, both of which are open throughout the month (weather-permitting).

In Italy, the best October skiing is to be found on the underrated Passo Stelvio glacier near Bormio, which actually closes again in early November but has a reputation for big autumn dumps. Cervinia usually opens in mid October, at weekends only, before opening daily from late October. This year (2020-21), it will not be opening early at weekends, with its main season set to start on 26 October 2020.

Austria has the highest number of skiable glaciers in the Alps, but opening dates for many of them are variable depending on snow conditions. One exception, and arguably the best glacier in the Alps, is Hintertux, which remains open 365 days a year.

Other good options in Austria are Stubai, which normally opens in early October, and Sölden which is usually open by late September.

By November, the days are drawing in and it should be turning noticeably colder, with resorts on standby for the first real signs of winter. In a typical year, a number of snowfalls will allow some sort of base to start accumulating at altitude (occasionally lower down as well), but it doesn’t always happen and some recent Novembers have seen little or no fresh snow at all.

There will always be plenty of glacier options open though, including Tignes, Zermatt, Saas-Fee, Hintertux, Sölden, Stubai, and the Kitzsteinhorn, to name just a few.

November is also the month when we see the first proper ski resort openings in the Alps, though considerable man-made help is often required. 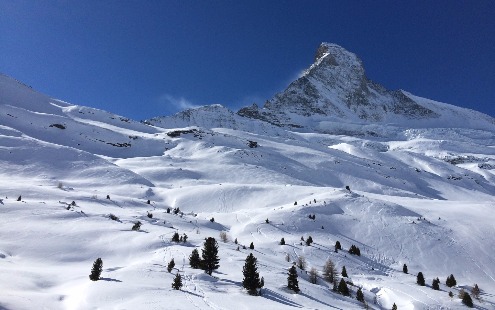 Zermatt has the highest pistes in the Alps, with guaranteed snow on its extensive glacier.

Obergurgl is normally the first major entirely non-glacial resort to open, typically in mid-November, with Val Thorens always hot on its heels, opening around the third weekend in November.

Towards the end of the month further big names follow suit, including Val d’Isère and Ischgl.

If there has been early snow, a number of other ski resorts may also decide to at open (at least partially), sometimes quite early in the month, but, generally speaking, snow conditions in the Alps in November are volatile and the vast majority of ski resorts remain closed until December. 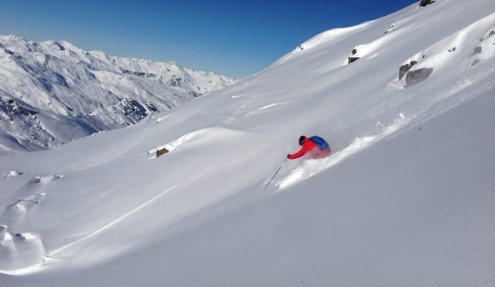 Val Thorens is usually open by the third week of November - Photo: facebook.com/skipass

Most early season skiers don’t plan on hitting the slopes until December, which is crunch time in the Alps. Most resorts will plan on opening in the first two weeks of the month, all of them due to be open by Christmas week. That said, snow conditions in the Alps in December remain highly variable, and some resorts may still be waiting for their first serious snowfall.

Snowfall has a better chance of sticking at lower altitudes in December than in November, though fluctuating temperatures often mean that multiple snowfalls in quick succession are necessary to secure a lasting base. 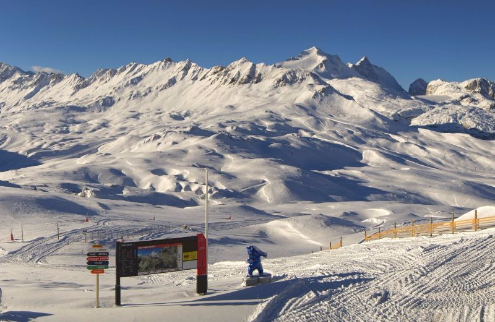 Over the last decade there have been some very poor Decembers in the Alps, including three consecutive years (2014, 2015, 2016) when some ski resorts had no natural snow at all.

However, it should be remembered that (with a few exceptions) most resorts do manage to offer at least some skiing thanks to snow-making, even in the leanest of early seasons. There is no better example of this than the Dolomites, where the Sella Ronda region managed to open hundreds of kilometres of pistes without a flake of real snow in sight. 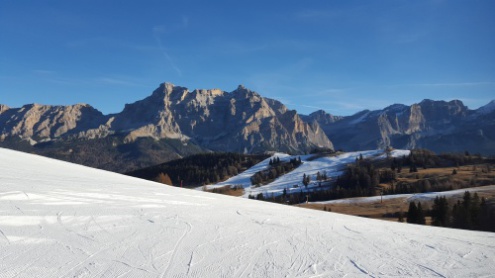 Snow-making in the Dolomites is as good as it gets.

In a typical December, however, most ski resorts will have some natural snow and, at high altitude, there is every chance of a reasonable base, especially later in the month. The sun is also now very low in the sky, which means that it has little power to adversely snow conditions in its own right. However, temperatures remain volatile and the risk of rain is higher than in January.

We would recommend the following resorts as having the best chance of good snow in December: 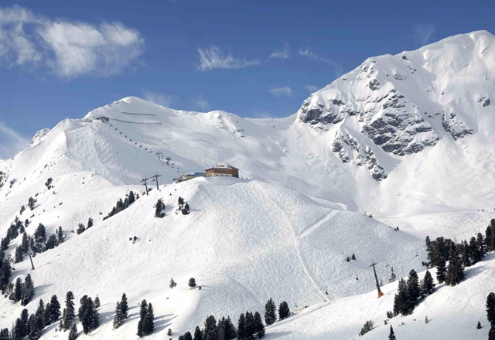 Obertauern is one of the better early season bets in Austria.

What quality of snow can you expect?

So we know that early season weather patterns in the Alps can be erratic and that good natural snow cover is far from guaranteed. What of the snow quality though?

Snow quality is very dependent on the weather on any given day. The key difference between early and late season snow conditions is the strength of the sun. Early in the season, especially in December, the sun is very weak and has little direct effect on the quality of snow. Whereas, later in the season, the sun is higher in the sky and has more impact.

In the early part of the season, it is the ambient air temperature and humidity (as well as the threat of rain) which are more important. If it is mild and damp, the quality of the snow will suffer. If it is cold and sunny, the snow will tend to stay firm all day long. Low south-facing slopes may soften up a little, but you would certainly not expect anything like the slush that is so common later in the season.

Ice, rather than slush, is more likely to be a nuisance early in the season. Ice is at its worse when there is heavy skier traffic on a thin base. Steep north-facing slopes are particularly susceptible as they get no sun at all early in the season and any “fresh” snow is quickly scraped away. This is exacerbated if the slopes are exposed to high winds. The best “cure” for early season ice is consistent snowfall. Failing that, aim for less crowded low angle slopes.

So what conclusions can we draw about early season snow conditions in the Alps?

First of all, there is rarely much “proper” skiing available in the Alps before mid to late November. By “proper” skiing we mean skiing that is not mostly or completely reliant on glaciers or intensive localised snow-making.

If you are looking to go skiing as early as possible, but want to feel like you are vaguely in season, then you really have to wait until December. Resorts which should feel like they are properly up and running in early December include Val d’Isère, Tignes, Val Thorens, Cervinia, Zermatt, Saas-Fee, Sölden, Ischgl and Obergurgl.

However, don’t be surprised if some minor ski resorts aren’t properly open until the middle of December, or even the beginning of Christmas week, regardless of snow cover. 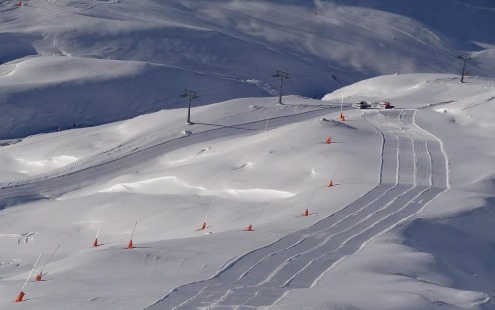 Ischgl is one of the first entirely non-glacial resorts to open in the Alps - Photo: ischgl.com

Secondly, although early season weather and snow conditions in the Alps are volatile, resorts have become very adept at opening pistes with little or no natural snow, and can offer very enjoyable piste skiing even in times of severe drought. Nowhere is this more evident than in the Dolomites, where last December literally hundreds of pistes opened in the Dolomitisuperski region before a single flake of real snow had fallen.

All this goes to show that, when considering which ski resorts will offer the best skiing early in the season, while altitude is undoubtedly an important factor, height is not always the 'be all and end all', and it can pay to do a little research into which resort actually has the most pistes open. It’s not always where you might think!

Read our blogs on:

Where to ski in the Alps in September

Where to ski in the Alps in October