Where to ski in the Alps in October

It is difficult to generalise about what conditions you are likely to encounter in the Alps in October. In a typical year there will already have been one or two high altitude snowfalls - enough to freshen up the glaciers, but still some way short of generating any serious excitement.

Even if it does snow lower down, it nearly always all melts - so don’t expect much, if any, non-glacial action before the end of the month. It can happen of course - in 2007, Schladming (Austria) managed to fire up its lifts as early as 26 October, but this is very much the exception rather than the rule.

This year, travel restrictions due to Covid-19 may make it difficult to get to any of the ski areas that will be open but, if you are lucky enough to be able to, there are several good options available.

So what’s the situation as we approach October 2020?

Followers of weathertoski will know that the Alps are currently emerging from an unusually cold and snowy spell of weather that has deposited up to 80cm of fresh snow across some northern parts of the Alps.

While this is unlikely to encourage the unscheduled opening of any non-glacial resorts, it is a major boost for the glaciers, which can look a bit threadbare at this time of year.

In France, Tignes will almost certainly be the only option open this October, and plans to open its Grande Motte glacier on 17 October 2020.

Les 2 Alpes also used to open during the autumn half term (late October) but has struggled to do so in recent years due to lack of snow. Thanks to the recent snow this year, it has now announced that it will open its glacier from 17 October to 1 November.

In Austria, several glacier areas are up and running for skiing, with more to follow shortly. Once open, all of these areas will be operational throughout October.

Hintertux (open 365 days a year) normally offers the most extensive terrain, early in the month at least, with 20-30km of open pistes.

The Pitztal glacier (Tirol) opened on 19 September 2020 and is currently offering two pistes, but this may increase in the near future.

Sölden opened its glacier operation on 25 September 2020, with a modest 4km of runs on offer, but this is also likely to increase during October. The Kaunertal glacier (Tirol) opened a day later on 26 September 2020, and is currently operating five pistes.

The Kitzsteinhorn glacier above Kaprun is due to open in early October, although has no definite date set as yet.

The extensive Stubai glacier will open on 2 October, as will the smaller Mölltal glacier in Karinthia.

The Dachstein glacier has opened in October in previous years (when conditions permit), but there is no confirmation yet as to when it might open this year. 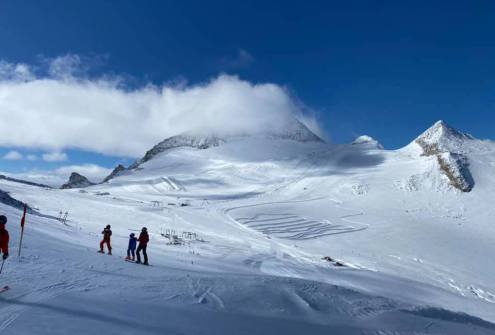 In Switzerland, you can currently ski (weather permitting) on the glaciers above Saas-Fee and Zermatt.

Switzerland has two good skiing options open throughout the month of October. The first is the glacier in Zermatt, which offers up to 20km of slopes. The second is the glacier in Saas-Fee, with a similar extent of open terrain.

Glacier 3000 (near Les Diablerets) normally opens in early November, but has this year (thanks to the unusually heavy recent snowfall) decided to open one run from 28 September 2020, with a view to continuing operations throughout October, so long as snow conditions permit. 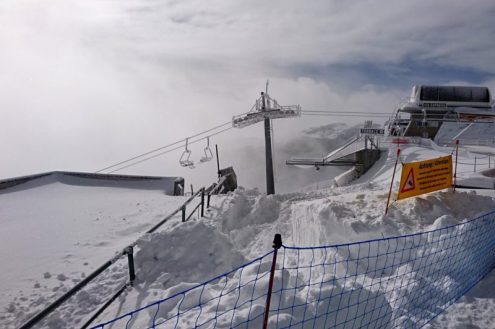 Thanks to 70cm of fresh snow, Glacier 3000 near Les Diablerets in Switzerland has decided to open early - Photo: facebook.com/Glacier3000, 26 September 2020

In Italy, the best glacier skiing option in October is Passo Stelvio (near Bormio), where up to 20km of pistes will be open throughout the month.

The glacier at Val Senales is another option, albeit more limited, with three runs currently open and possibly more to follow if conditions permit.

Unlike in previous years, Cervinia will not be opening at weekends in advance of its main season, and is this year due to start its daily operation from 26 October 2020. The amount of skiing available will depend on snow conditions, but usually extends as far below the glacier as possible.