With 200km of pistes (or 425km including the Paradiski area), a vertical drop of 2000m and several resort bases to choose from, Les Arcs is without question one of the heavyweights of the French ski scene.

Les Arcs also offers a huge variety of terrain both above and below the treeline, and boasts some of the finest and most famous pistes in the Alps.

Here are five of our favourites... 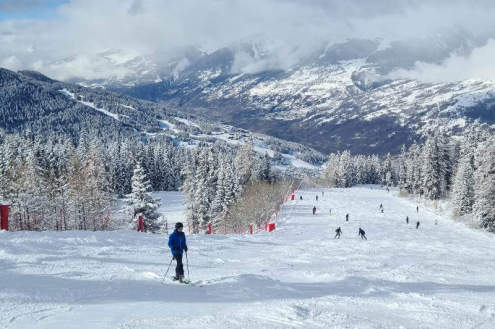 Les Arcs has a great variety of pistes both above and below the treeline – Photo: weathertoski.co.uk

At over 7km long and one of only four pistes in the Alps to offer a descent of more than 2000m vertical, the ‘Aiguille Rouge’ is not just Les Arcs’s crowning glory but also widely considered to be one of the finest runs in the Alps.

Although the cable-car up to the 3225m summit of the Aiguille Rouge is prone to queues, its relatively low capacity ensures that the run down is not too crowded.

The piste starts with a relatively short steep section that can be avoided by taking a narrow path, both arriving on the Glacier du Varet which nearly always has perfect snow and is great for carving wide turns. The top section of the piste is black/red. The run soon becomes narrower again, hugging the mountain to the right, with sweeping views over Arc 2000 to the left. This section is classified as black though is not difficult unless icy, and there is an option to peel off before the black section on the red ‘Arandelières 2’ run, back to the bottom of the Aiguille Rouge cable-car 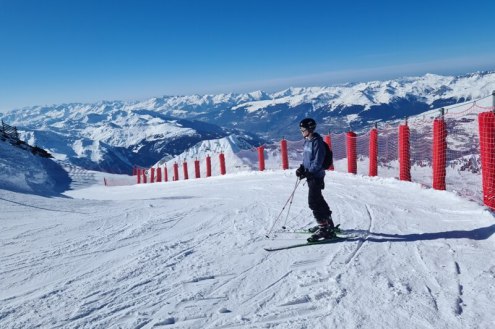 From the top of the long Aiguille Rouge run you can see as far as the Jura on a clear day – Photo: weathertoski.co.uk

The piste then continues to follow the ridgeline for some time before turning right, at which point the ski resort of La Rosière comes into sight across the valley below. The run then widens, the last of the piste’s more open sections, but can get busier as skiers arrive on the Lanchette chair from the centre of Arc 2000.

From here you enter the more forested part of the run, where you have the choice of continuing on the Aiguille Rouge, the most direct route down, or taking the more roundabout ‘Lys’, a scenic “blue” path that adds at least a couple more kilometres to this fabulous descent.

Either way you end up at the charming, rustic little hamlet of Villaroger, from where you return to Arc 2000 via three ancient chairs. Frustratingly slow as these are, they do again help to keep congestion on the runs down to a minimum and retain the peaceful rural atmosphere of this most far-flung sector of Les Arc’s ski area. 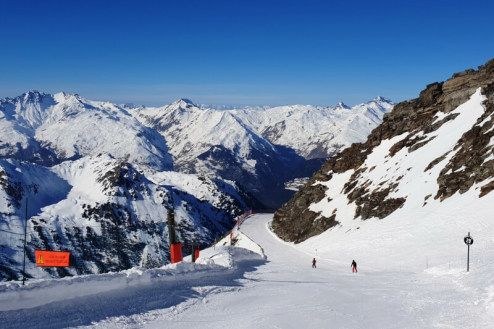 For more about the Aiguille Rouge, read our blog: "Is this the best piste in the Alps".

The uniquely quirky Malgovert is my second favourite run in Les Arcs. It may not be the longest piste, but for sheer variety and character it is hard to beat. Accessed by the fast new Comborcière chairlift, it is classified as a black “Nature” which means that it is marked, avalanche controlled, and patrolled, but not bashed.

The run starts innocuously enough, with a gentle cruise along the ridge, affording stunning views across the valley towards La Rosière, but becomes more technical as it wends its way into the trees above Arc 1600. 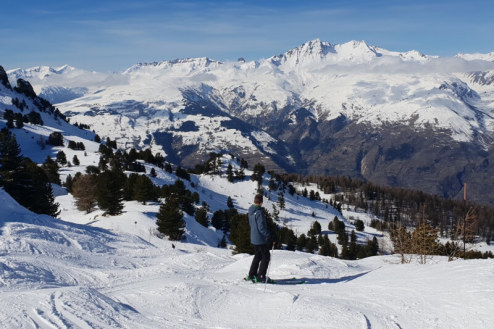 The challenging, ungroomed Malgovert is one of the quirkiest pistes we have come across – Photo: weathertoski.co.uk

The beauty of this run is that it keeps you on your toes with its constantly changing terrain. There are flat bits, steep bits, wooded bits, moguls, ridges, mini-canyons, cliff-bands, you name it - everything you might ever come across on a mountain bundled into one short run.

But beware - it is not the easiest ride! It is also quite easy for skiers to get separated – though you will never end up too far apart - and the run will close if icy, which it often is. 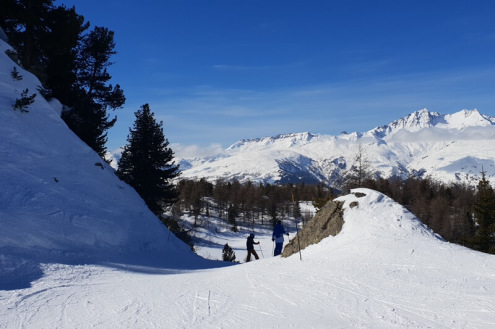 The Malgovert piste is full of twists, turns and rocky outcrops to keep you entertained! – Photo: weathertoski.co.uk

Arguably my most controversial choice is the Combe, at the outer reaches of the Peisey-Vallandry sector. This run is often ignored - one of the reasons I make a beeline for it whenever I am in that area.

What starts as a wide sweeping and usually empty red through the trees, ends up on a gentle scenic path with fabulous views towards La Plagne and the imposing north face of the 3417m Bellecôte mountain. There is also a delightful little pit-stop ‘La Ferme’ just below the piste with panoramic views from its terrace. 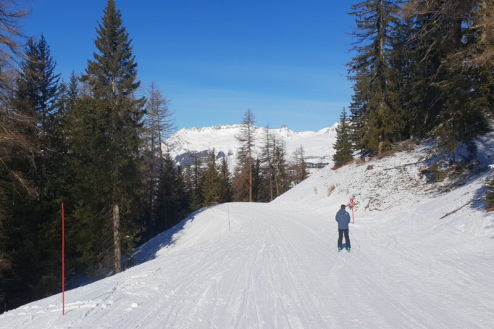 The lower part of the Combe run is a pleasant schuss through the trees to Peisey-Vallandry – Photo: weathertoski.co.uk

What’s not to like? Well, the snow to be frank. The main part of the run faces south-west and is subject to a more pronounced freeze-thaw cycle in calm, sunny weather than on any other run in the area.

While this may be a deterrent, the run can be delightful if you get your timing right. Try it around lunchtime on a sunny day in February, or mid-morning at Easter.

Ok, I am cheating here slightly as this is not just one run but actually three connecting runs that together make one of the most varied descents in the main Arc 2000 bowl, which can otherwise feel a bit samey.

Having taken the Bois de L’Ours chairlift up from Arc 1950, the descent starts with a short traverse along the ridge before taking the 'Lac' red run down into the bowl. Thepiste starts simply enough - a smooth open red that follows the fall-line before turning a sharp left and steepening as it enters a scenic canyon. This then ‘turns into’ the blue ‘Edelweiss’, which flattens out before delivering you back to the bottom of the Bois de L’Ours lift. 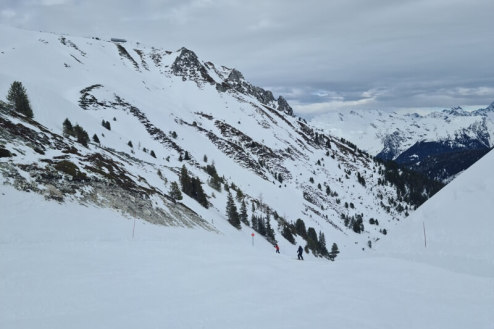 The Edelweiss piste is tucked away in a secluded valley, out of sight from most of the Arc 2000 bowl – Photo: weathertoski.co.uk

Continue past here though and you pick up the Vallée de L’Arc, a wide and often quite busy avenue that connects Arc 1950 to Pré Saint Esprit, a long gentle descent that would be nothing special were it not for the opportunities it affords to nip into the trees on your left.

This is particularly good fun after a fresh snowfall with numerous little lines to follow in the relative safety of the thick woods just above the main piste. Get stuck and you can easily bail out, with the run eventually bottoming out at Pré Saint Esprit where you have a choice of lifts back to the main Arc 2000 bowl (on the speedy Pré Saint Esprit chair, with its heated seats and cover – both very welcome in poor weather) or towards Arc 1600/1800 on the Comborcière. 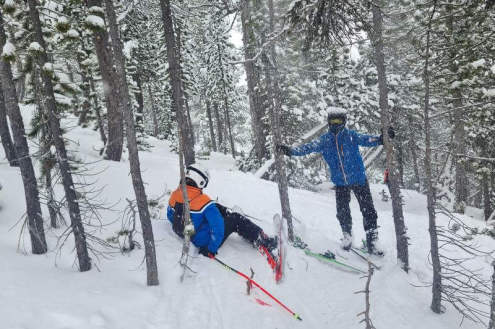 The Vallee de L’arc 1 piste has lots trees on its left hand side – great to play in during or after a storm – Photo: weathertoski.co.uk

The Renard is a fast, fun blue run served by the 8-person Derby lift, roughly equidistant between Arc 1800 and Vallandry. As this lift is mainly used to move between the two resorts, people tend to ignore the pistes immediately below it, meaning that the Renard is seldom crowded and is excellent for high-speed carving.

The very top of the piste is open, but most of the run descends through the trees which is useful on poor visibility days. What’s more, you can continue below the Derby lift onto the Myrtilles red for a long and satisfying descent of around 700m vertical. 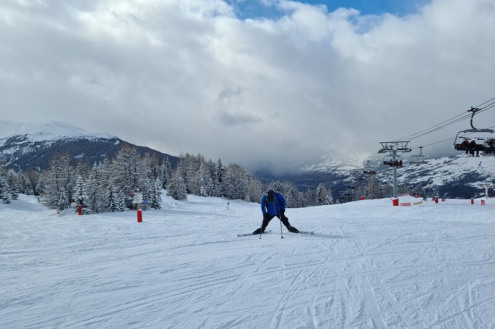 The Renard piste between Arc 1800 and Vallandry is great for carving – Photo: weathertoski.co.uk

With thanks to the Les Arcs Office de Tourisme...

Looking for hotels in Les Arcs?