Is Flaine one of the most underrated ski resorts in France? 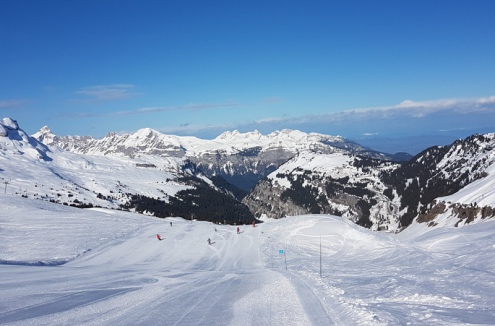 With extensive varied slopes, a snowy micro-climate, short transfers and ski-to-the-door lodgings, Flaine has it all. So why doesn't it enjoy the same A-list status as its resorts in the nearby Tarentaise such as Courchevel and Val d’Isère?

As the skiing here is undeniably excellent, the answer is probably more to do with the resort itself, a classic 1960s purpose-built French ski resort whose somewhat austere Bauhaus architecture may have its admirers, but is certainly not to everyone’s taste. But unlike some of its rivals, Flaine is first and foremost a skier’s resort and has never pretended otherwise.

If your priority is skiing or boarding, here are five reasons why Flaine is unlikely to disappoint, whatever your level…

Flaine is part of one of the largest and most varied ski areas in the French Alps, the Grand Massif, which offers 265km of varied terrain for all levels of skier.

Beginners will appreciate the gentle snow-sure nursery slopes served by free lifts in both of the resort’s two main centres, Flaine Forum and Flaine Fôret. Near novices will also enjoy the wooded green runs that connect Flaine Montsoleil to the main resort before progressing to the longer Serpentine blue from the top of the Grandes Platières. 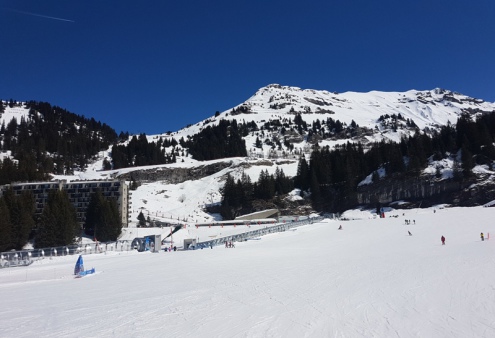 Intermediate skiers will delight in the sheer scale and variety of runs in Flaine and across the Grand Massif as a whole.

The local skiing is typical of a high purpose-built resort, with lots of long, snow-sure runs (mostly above the tree-line) descending towards the resort from a high open bowl. 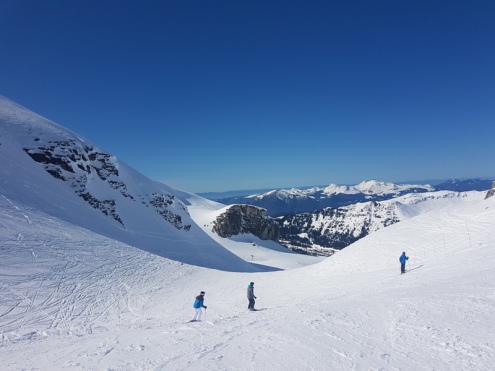 However, from the ridge of the bowl, you can also access the scenic and peaceful 14km Cascades run, which takes you well away from the main lift system past a series of waterfalls into the tiny village of Sixt. From here a short bus ride takes you back to Samoëns where you re-join the main ski area. 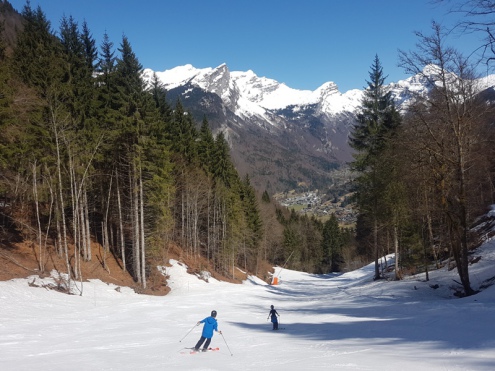 Peace and quiet on the 14km Cascades run from Flaine to Sixt - Photo: weathertoski.co.uk

Samoëns itself also offers lots of intermediate terrain and is linked to neighbouring Morillon, which offers an uninterrupted descent of 1200m vertical through the trees. Fans of tree-lined slopes will also enjoy the nearby resort of Les Carroz, one of the best places in the area to head to in poor visibility.

Flaine also has much to offer for advanced and expert skiers, with several genuine on-piste blacks, including the mogulled Diamant Noir which follows the fall-line off the top of the Grandes Platières. The more remote Col Gers is equally challenging.

There is also some fabulous off-piste both locally and across the Grand Massif as a whole. You should always take a guide though, as the terrain here is complicated - the upper sections of the Grand Massif, in particular, require extra caution due to the number of hidden pot-holes and cliff-bands. 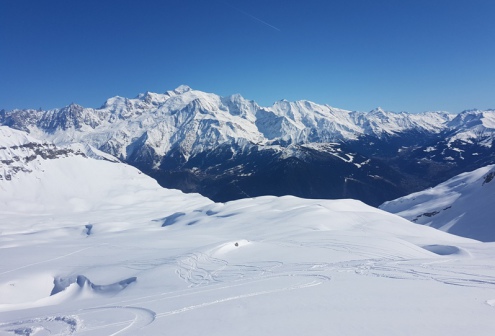 Fabulous off-piste under the gaze of Mont Blanc - Photo: weathertoski.co.uk

Flaine’s unique geography means that the resort punches well above its weight when it comes to snow - in terms of both quantity and quality.

The quantity comes from the resort’s location close to the north-western edge of the Alps, which makes it highly exposed to Atlantic storms. Also a factor is its proximity to Mont Blanc - western Europe’s highest mountain, which lies just a few kilometres (as the crow flies) to the south-east of the Flaine ski area. Its sheer size forces air in front of it to rise on a massive scale, purging itself of extra moisture, leading to heavier snow than might otherwise be the case in Flaine and some other favoured areas nearby.

Not only does Flaine benefit from high natural snowfall, but it also preserves its snow well, at least in the main bowl. Most of the local slopes face north and the resort is surrounded by a horseshoe of high mountains that protect the ski area from the worst excesses of mild westerly or south-westerly winds. For this reason, snow is guaranteed all the way down to resort well into April. 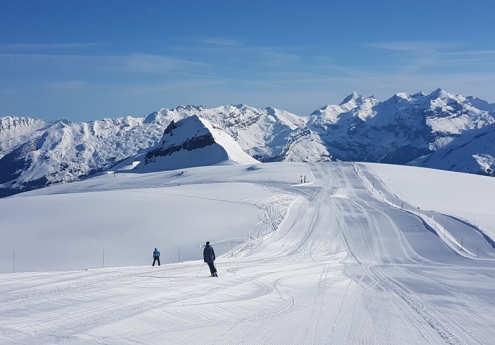 Even by French purpose-built standards Flaine rates high on ski convenience, with most of its accommodation either on, or within a stone’s throw of the slopes.

Even if you are out in the satellite resort of Flaine Montsoleil, you are still on a piste, and all pistes (in the main bowl at least) eventually lead down to Flaine Forum, the resort’s main centre. 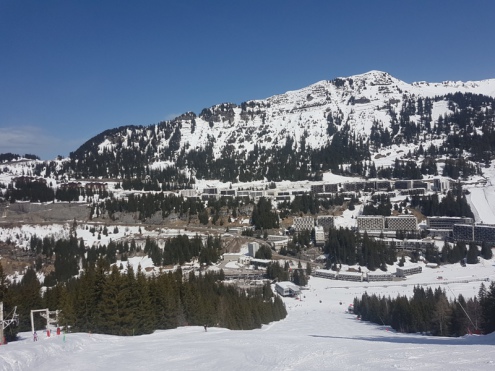 Super-convenient Flaine blends unobtrusively into its rocky surroundings – at least from a distance! - Photo: weathertoski.co.uk

While nowhere in the northern French Alps is cheap, Flaine is noticeably better value than its A-list rivals, such as Val d’Isère, Méribel, Chamonix and even Avoriaz.

The resort is clearly trying to move a little more upmarket but it remains an attractive proposition for anyone looking for the “big resort” experience without breaking the bank. 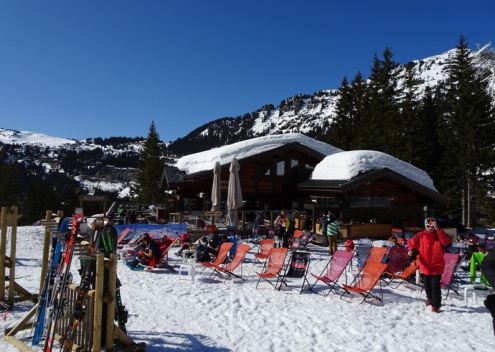 Flaine's mountain restaurants are noticeably cheaper than in the Tarentaise - Photo: weathertoski.co.uk

This is particularly true when it comes to accommodation - while there are now several luxury options and more springing up, even these are inexpensive outside peak holiday dates, and there are still plenty of apartments of the more ‘cheap and cheerful’ variety. 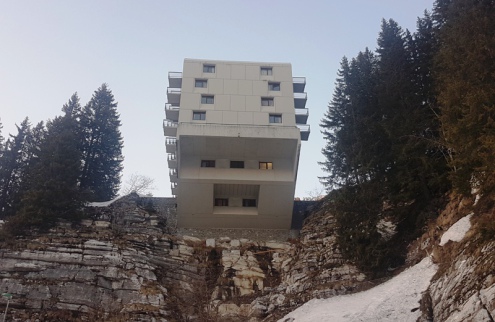 If you’re fed up with the pretentions of the big Tarentaise resorts, Flaine offers something altogether more down to earth.

There are no swanky five-star hotels here, and the resort's lack of ‘A-list’ status is positively reflected in the attitude of the people who live and work here. Despite the size of its ski area, Flaine is also smaller than you might expect and, with many of the saisonniers coming back year after year, the vibe is friendly and relaxed. 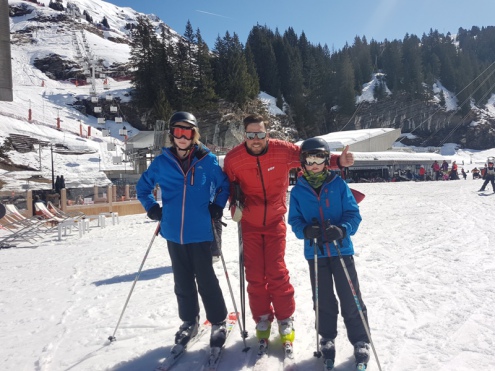 Flaine - where to stay:

Fraser and his family stayed with Ski Collection at the 4* luxury Le Centaure apartments in Flaine in April 2018. 7 nights self-catered costs from £247pp*, including a return Eurotunnel crossing with free upgrade to FlexiPlus.