Complete guide to summer skiing in the Alps

Even if most skiers take their holidays in "winter", lift-served skiing is available in the Alps 365 days a year.

How the winter season is defined may be subject to debate, but we consider it to end in early May when resorts such as Val Thorens, Tignes and Cervinia finally call it a day, regardless of how much snow they still have on their slopes. Until the first proper snowfalls of Autumn, the Alps are then in "summer skiing" mode, which for the most part means skiing on glaciers.

In recent years, even after bumper winters, summer ski areas have sometimes struggled to stay open by August due to the increasing frequency of summer heatwaves in the Alps.

This spring (2022), after a modest winter (in terms of snowfall), snow depths on the Alpine glaciers are already nothing special, which is a bit of a concern for this year's summer ski season, particularly for those areas that would usually hope to remain open until late summer.

Note that the Mölltal glacier, which often opens throughout the summer, has this year decided not to open at all for summer skiing due to the lack of snow in the southern Alps.

What to expect when summer skiing in the Alps

Most summer ski areas in the Alps are only open in the mornings, typically from 7am until about 12pm or 1pm. If the weather is fine, there will have been an overnight freeze meaning that snow conditions will be rock hard first thing in the morning. However, as the sun is very strong in summer, the snow will quickly soften, with the best snow conditions typically found between 9am to 11am. Later in the morning the snow will often turn very slushy, so the lifts tend to close around lunchtime.

If you are thinking of summer skiing in the Alps, you should be prepared for any weather conditions. Although it can feel hot in the strong summer sun - and you will often see people skiing in t-shirts - the strong sun can mask a low ambient temperature, and it can feel very different the moment there is any shade or wind.

The weather can also change very quickly, with rain and even snow possible at any time of year, sometimes accompanied with thunder and lightning. On the whole, any cloud and showers are more likely in the afternoon than in the morning, but this is not something you should rely on. Always check the weather forecast carefully before seting out, and be prepared for sudden changes.

Last but not least - don't forget the sunscreen! The strength of the sun is brutal on the glaciers in summer, and Factor 50 is strongly recommended.

Here is our complete country by country guide to summer skiing in the Alps in 2022... 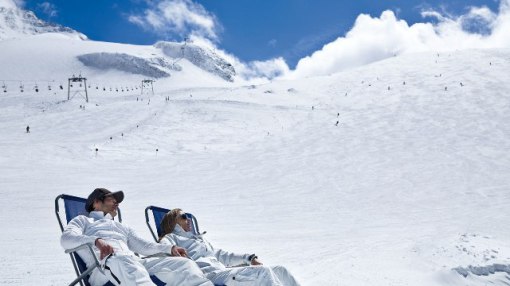 Hintertux arguably offers the best summer skiing in the Alps. It is certainly one of the most reliable areas for snow, opening 365 days a year, and is less prone to bad weather than Zermatt - the only other resort that even comes close to attempting all year-round skiing.

This May (2022) the Hintertux glacier still has around 3m of snow, which should make it as good as bet as anywhere for anyone looking to go summer skiing in 2022.

In high summer expect to find around 20km of pistes served by up to nine lifts. However, in good snow years you may find more than 20km of runs available in early spring or late summer.

Looking for a summer ski holiday in Hintertux? 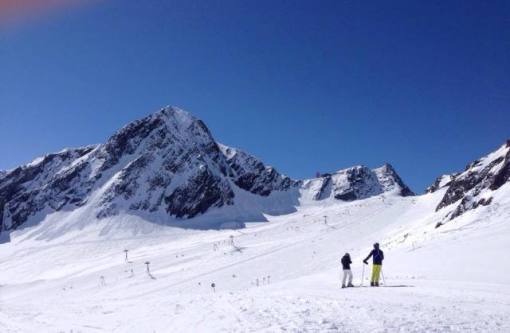 When fully open, Stubai offers some of the most extensive and varied glacier skiing in the Alps, with a vertical drop of some 900m often possible down to the mid-station at Fernau, especially early in the summer ski season.

This year the Stubai glacier is due to close on 6 June 2022, but can sometimes remain open until early July.

How much terrain is available towards the end of the summer ski season is highly dependent on snow conditions, but you can usually expect up to 18km of mostly intermediate slopes served by half a dozen or so lifts. 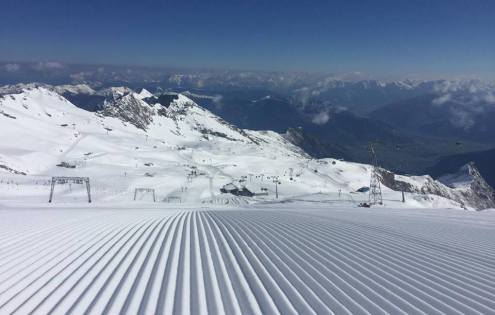 The Kitzsteinhorn glacier above Kaprun, in the Austrian Salzburgland, is one of the better known summer ski options in the Alps, even if opening dates have become more variable in recent years.

Although it can sometimes close in spring before re-opening for the summer ski season, this year the glacier will remain open until 19 July 2022.

How much terrain is available depends on snow conditions but at the time of writing there are about 9 runs open between 2450m and 3029m, with a very healthy 4.4m upper base. However, by July the operation is likely to be confined to just one run on the upper part of the glacier.

Opening dates: Closed in 2022 (has in the past opened for variable periods from mid-June onwards) 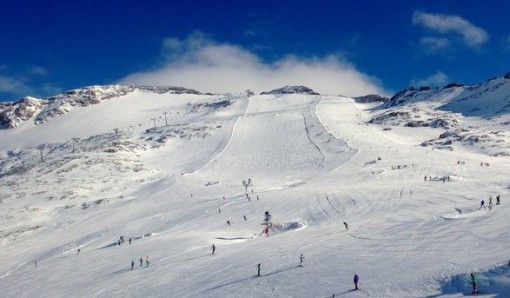 Located in the province of Carinthia, the Mölltal glacier is Austria’s most southerly summer ski area.

When it is open, in high summer you can expect there to be three pistes (3km) available. 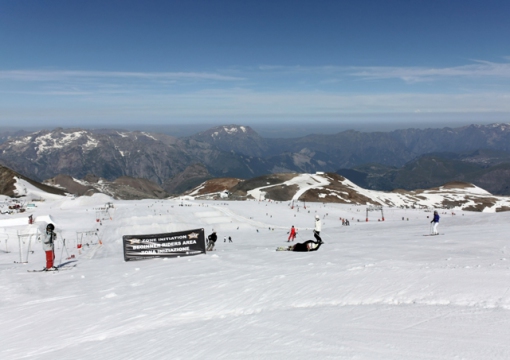 Les 2 Alpes offers the largest and most varied summer ski scene in France, which this year runs from 28 May to 28 August 2022.

The disadvantage of Les 2 Alpes (compared with its main French rival Tignes) is that its glacier takes a long time to reach – around 40 minutes from base. However, once up there you have access to the largest skiable glacier in the Alps with 11 (mostly easy) runs and, in good conditions, an impressive 770m vertical available between 2800m and 3570m (Dôme de la Lauze), although the vertical range is more likely to be closer to 400m*, especially later in the summer. 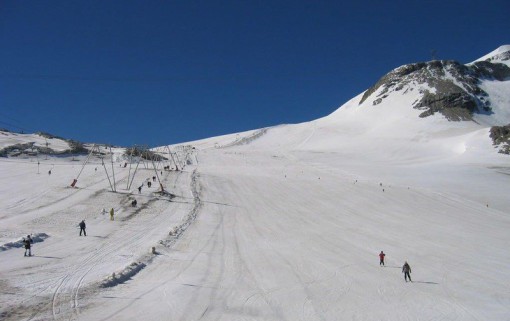 Tignes is one of only three ski resorts in France to still guarantee skiing in summer. This year summer skiing will be available in Tignes between 18 June and 31 July 2022.

Summer skiing takes place on the Grand Motte glacier, reached in a matter of minutes via a high-speed underground funicular from Tignes Val Claret.

In good snow conditions you can expect around 18km of easy to intermediate pistes, with a top height of 3455m and vertical drop of around 500m.

Looking for a summer ski holiday in Tignes?

Opening dates: Not open in summer 2022 due to poor snow cover 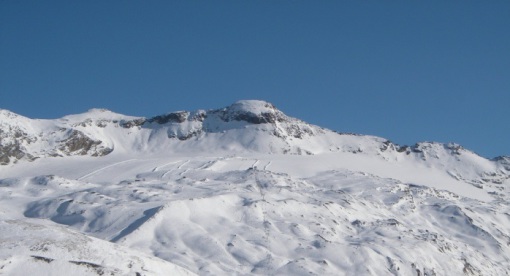 Val d’Isère has the most limited terrain and shortest season of France’s three summer skiing options. Summer skiing was originally intended to be available in Val d'Isère between 11 June and 10 July 2022, however, the resort has now taken the decision not to open this summer due to poor snow cover.

The resort's summer ski area is not directly accessed from Val d'Isère itself, but from the parking lot near the top of the Col d’Iseran, 20-30 minutes away by car/bus, from where you take a chairlift to the Pissaillas glacier.

Early in the summer season you can sometimes ski back to the base of the chair on a non-glacial run, which greatly adds to the appeal of the area. More often though you are confined to just a couple of easy intermediate runs on the glacier, and have to download back to the parking lot by chairlift at the end of the day.

Looking for a summer ski holiday in Val d'Isère? 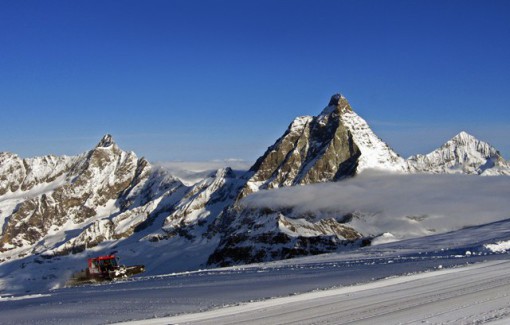 Cervinia is one of just two Italian ski resorts to offer skiing in the middle of summer - the other being Passo Stelvio near Bormio.

Cervinia's ski area is shared with Zermatt, with most of the summer skiing actually taking place on the Swiss side of the border. In high summer, skiing normally takes place between 3400m and 3899m, comprising around 21km of wide open pistes. The summer ski area is mostly easy but very snow-sure, and includes Europe's highest snow-park.

This year Cervinia's summer skiing operation will run from 25 June to 4 September 2022.

Looking for a summer ski holiday in Cervinia? 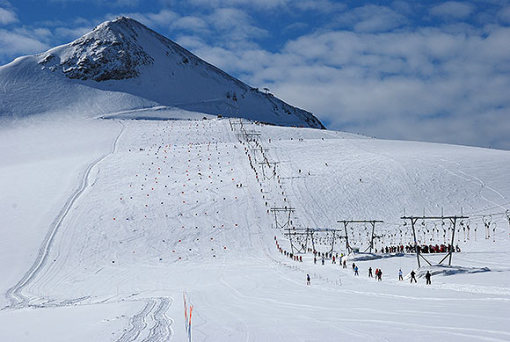 One of the more underrated summer ski areas in the Alps, Passo Stelvio offers around 20km of wide open and mostly gentle pistes between 2758m and 3450m.

The main glacier is accessed by cable-cars from the Passo Stelvio pass, about 40 minutes' drive from Bormio, and keeps its snow in better nick than most summer ski areas on this list.

This year the Passo Stelvio summer ski area will open on 28 May 2022 and continue through to 2 November 2022. Note that the ski area is never open in winter.

Opening dates: All year round (though some disruption is possible in spring due to maintenance) 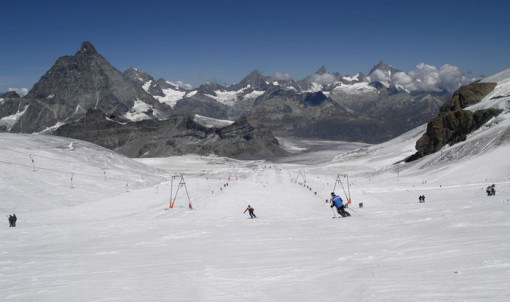 Zermatt (combined with Cervinia) offers one of the largest summer ski areas in the Alps. It also has the highest piste (3899m) and the longest vertical - nearly 1000m down to Trockener Steg, in good snow - though this is normally only possible early in the summer.

In high summer you can still expect to find around 20km of wide open and mostly easy pistes, with some of the most reliable summer snow conditions in the Alps.

Zermatt is one of only two ski resorts in the Alps (the other being Austria's Hintertux) that try to offer skiing 365 days a year.

Looking for a summer ski holiday in Zermatt? 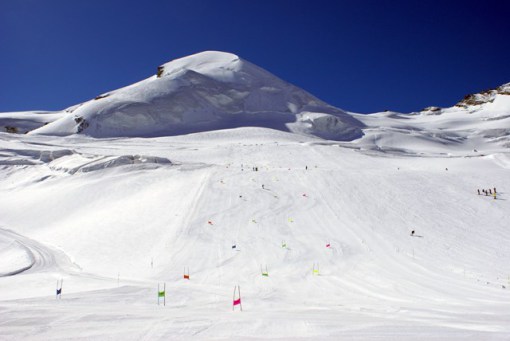 Saas-Fee is one of just two Swiss ski resorts to still offer skiing in high summer. This year the resort is scheduled to open its summer skiing operation on 16 July 2022, with skiing then continuing right through until spring 2023.

Expect around 20km of relatively snow-sure pistes, with slightly steeper terrain than in nearby Zermatt.

Saas-Fee also has a reputation for keeping its glacier snow in better condition than most.

Looking for a summer ski holiday in Saas-Fee?