Italy may not be the first country that springs to mind when considering early season skiing in the Alps, however, it does have plenty of high altitude terrain and (crucially) some of the best artificial snow-making in Europe. This means that, on-piste at least, plenty of good early season skiing is virtually guaranteed.

Thanks to their location on the southern side of the Alps, Italian resorts are also less affected by the warming effect of the gulfstream, meaning that they benefit from lower humidity and better snow preservation than many resorts at the same altitude in the north-western Alps.

Although one of Italy's headline resorts Cervinia offers a summer ski season, this is wound down in early September to allow it time to prepare for winter. The glacier at Passo Stelvio is open throughout September (when it can be the only option open in Italy) and remains open into early November.

Val Senales is the next glacier ski area to open, either in late September or early October. Cervinia’s re-opening of its glacier skiing follows shortly after, usually in mid to late October, traditionally at weekends only to begin with, then daily from the last week of October. This year it will not open early for weekends, however, and is set to operate daily from 24 October.

The only other resort that might see any action in October is Sulden (also known as Solda), which sometimes opens a few high, north-facing non-glacial runs if there has been significant early snow.

Most skiers prefer to wait for the main season to start before they take their ski trip to Italy though, when more terrain and facilities have opened up, and where guests can stay in a “proper” resort at the base of a ski area. For this reason, our Top 5 are selected from those resorts most likely to offer good snow conditions between late November and the Christmas holidays, although some do open earlier when conditions permit.

Here are our Top 5 early season ski resorts in Italy... 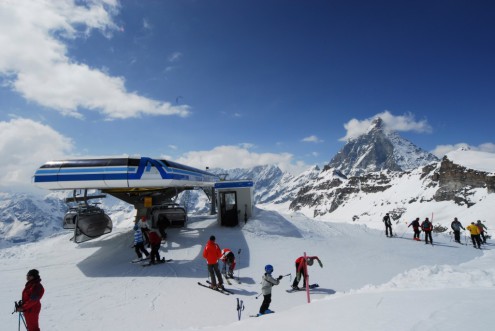 All things considered, Cervinia is by far and away the most snow-sure ski resort in Italy.

Cervinia's “winter” season begins in mid- to late October with the opening of the glacier area that it shares with neighbouring Zermatt (the Swiss side remaining open all year-round). Over the course of November, the resort then makes a huge effort to open as much terrain as far down the mountain as possible, starting with the run to Cime Laghi Bianco, followed by the runs to Plan Maison and eventually all the way down to resort.

Although every year is different, Cervinia nearly always offers the greatest amount of open terrain in Italy in November, with the bonus of access to the glacier in Zermatt (weather-permitting). You can generally ski down to Cime Laghi Bianco by early to mid-November (and very occasionally by late October), to Plan Maison by mid- to late November, and then down to resort by late November or early December, sometimes earlier.

Cervinia's excellent snow record is mostly thanks to its high altitude – no other resort in Italy comes even close to offering as much high-altitude terrain. The resort itself sits at 2100m, and its glacier ski area (shared with Zermatt in Switzerland) tops out at over 3400m on the Italian side, and at 3820m on the Swiss side.

Couple high altitude with relatively abundant natural snowfall (mostly from Mediterranean-based storms) and comprehensive artificial snow-making, and it is no wonder that Cervinia is considered one of the best early season ski resorts in the Alps. 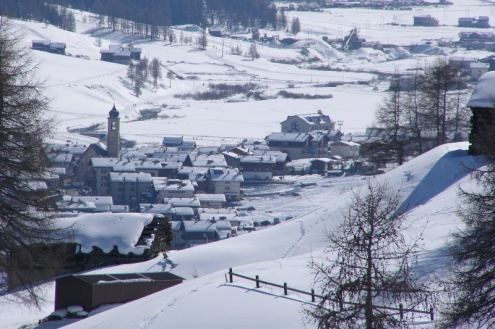 Despite being entirely non-glacial, Livigno has one of the best early season snow records in Italy.

Set in a high remote valley close to both the Swiss and Austrian borders, the resort’s unusually frigid winter climate has earned it the nickname Piccolo Tibet (Little Tibet). Livigno also benefits from decent natural snowfall, which comes mainly from the south (as with most Italian resorts) but sometimes from the north too.

The reason why the valley is particularly cold is partly due to its altitude, but more to do with its geographic position. Not only does it sit to the south of the main Alpine ridge, giving it protection from the warming influence of the Atlantic gulf stream (which is most troublesome in the northern and western Alps), but it is also set deep in the centre of the Alps, well away from the southern foothills and the worst of the warming effects of the Mediterranean. Rain is rare in Livigno, even right at the beginning of the season.

The shape of the valley – long, flat bottomed and steep sided – also makes for excellent early season snow preservation. Cold air (being heavier than warm air) pools easily in the valley early in the season when the strength of the sun is minimal and, once there, is difficult to shift.

All these factors combined make Livigno one of the most snow-sure early season ski resorts in Italy. 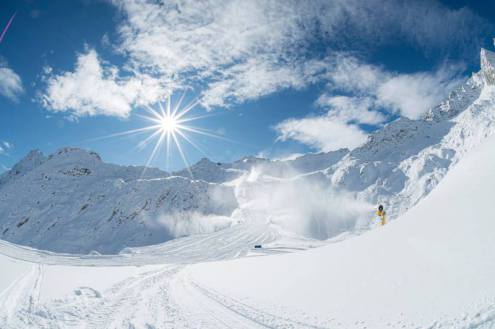 Passo Tonale (or 'Ponte di Legno-Tonale' as the area has recently been rebranded) is situated on the high pass linking the regions of Trentino and Lombardy in the central-eastern Italian Alps.

On the southern side of the pass is the north-facing Presana glacier, reached via a three-stage gondola which ascends from just outside the village. This is usually open by late October or early November and offers runs of about 500m vertical to Passo Paradiso, with the possibility of returning all the way back to base once conditions permit.

The main ski area, accessible from the centre of town, normally opens by mid- to late November. It does face south but this is of little concern early in the season when the sun is low in the sky.

Passo Tonale’s third ski area, Ponte di Legno, is lower (1256-2120m) but is both north-facing and wooded, making it a good option for a bad weather day, assuming there is good snow cover.

Glacier aside, the two most important factors in Passo Tonale’s impressive early season snowfall record are its altitude and natural snowfall. The resort itself sits at an impressive height of 1883m with slopes topping out just shy of 2600m on its main area and 3000m on its glacier. The area also bears the brunt of storms coming in from the south thanks to its location in a high and relatively exposed position close to the southern edge of the Alps. 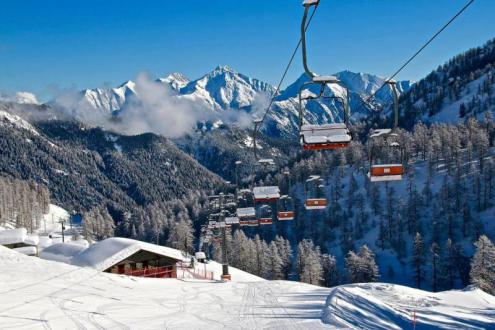 Monterosa Ski is the collective name for a number of resorts in the northern Aosta/Piedmont region, close to the border with Switzerland. The best known of these (and the ones that we have considered in terms of early season skiing) are Champoluc, Gressoney and Alagna, which occupy three separate but linked valleys.

As with many Italian ski areas, snowfall patterns are somewhat erratic in the Monte Rosa region. Early season snow conditions are generally reliable on-piste, thanks to a combination of impressive altitude and good artificial snow-making, covering all key routes on the lower half of the mountain. However, the area does have a bit of a ‘boom or bust’ reputation, at least in terms of powder off-piste.

The Monterosa Ski area is normally open from the end of November, but it can open earlier if snow conditions allow. Natural snowfall comes mostly from southerly Mediterranean-fuelled storms, and although relatively infrequent, can lead to huge falls. Falls of 1m or more at altitude within 24 hours are not uncommon, especially towards the Alagna side of the area. 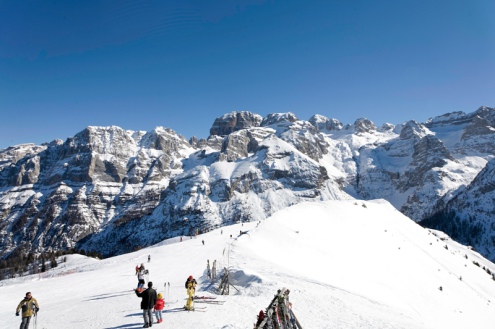 Given that the Dolomites are not especially high and have an erratic snow record, Madonna di Campiglio might seem like a controversial choice for an early season ski holiday. However, assuming you are happy to stay on-piste, the area is pretty much certain to offer plenty of scope early in the season, even in the most severe of snow droughts.

Its secret? Artificial snow, of course! Nowhere in Europe does it better than the Dolomite – perfectly illustrated a few years back during a run of particularly snowless Decembers which prevented many resorts across the Alps from opening early. For many Dolomite areas (e.g. Madonna di Campiglio, Kronplatz and Alta Badia) it was business as usual though, with most runs open even if it would have felt a little surreal to be skiing on strips of white snaking across green pastures.

Although several Dolomite resorts could have made this list, Madonna di Campiglio has more abundant natural snowfall than most, as well as very comprehensive artificial snow-making covering the vast majority of its ski area. This allows it to open from mid- to late November and makes it one of the best early season ski resorts for on-piste skiing in Italy.

Complete guide to early season snow conditions in the Alps

See all our other blogs