Piste perfection in the Dolomites

It’s not often I’ve ended the season on such a high. It followed a whistle-stop tour of Italy’s Val Gardena, an area of such mesmerizing beauty that, at times, it left me wondering if there was much point ever skiing anywhere else!

Even the kids, who barely know which country they are in half the time (let alone which resort) took an uncharacteristic interest in their surroundings, stopping frequently to gawp at the impossibly sheer Dolomite rock faces that dominate the skyline everywhere you look. 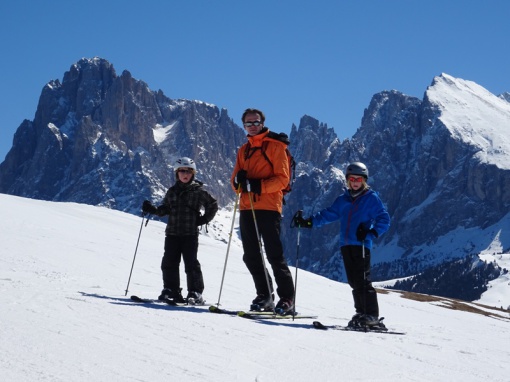 As summed up by the quintessential Where to Ski & Snowboard guidebook:

"this is one of the few destinations where we pray for sun; snowfalls would interfere with our scenery gazing without bringing any real benefit."

And so it proved. 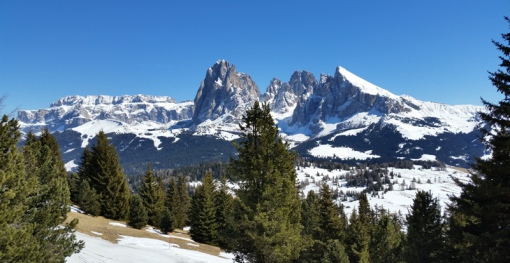 This season has, on the face of it, been a disappointing one for the Dolomites and a cursory glance at snow depths (0/70cm) before my arrival in Ortisei did little to raise expectations. What followed, however, were a couple of the most scintillating days of piste skiing I have ever experienced.

If ever there was a region whose snow reliability should not be judged by its snow depth figures alone, it is the Dolomites. 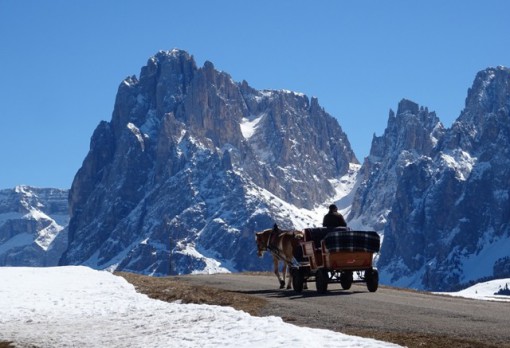 This is not somewhere you come in search of deep powder. Yes, big snowfalls do happen (2013/14 was testament to that) but off-piste is all but banned. This is an area you come to cruise round a seemingly unlimited supply of perfectly groomed runs, surrounded by some of the most magnificent scenery on the planet.

Natural snowfall patterns are erratic but they are mitigated by exceptional snowmaking, and piste management is taken so seriously as to be considered something of an art-form! 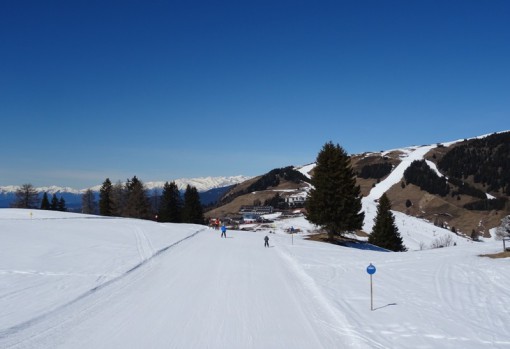 Even south-facing slopes (background) stay open in spring thanks to unparalleled snow-making - Photo: weathertoski
Our first day was spent exploring the Alpe di Siusi, a series of gentle bowls high above the town of Ortisei - for my money the most attractive and animated resort in the Val Gardena.
From the valley floor the vistas are impressive enough, but it is only on exiting the top station that you appreciate the full drama of the Dolomites. Few of the runs are long, and some of the lifts are decidedly antiquated, but none of this seems to matter. 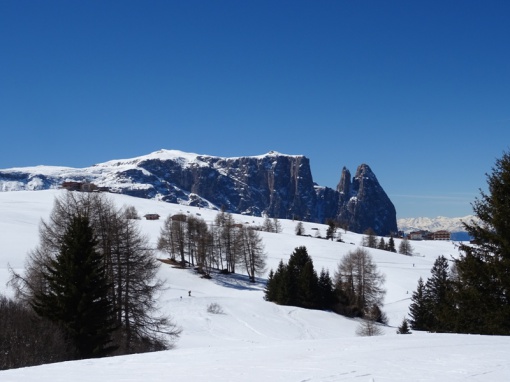 The excitement comes with the views, and in my opinion, the endless supply of mountain huts - more than 40 in this area alone! Langlaufers (cross-country skiers) and pedestrians are as much a part of the scene as “regular” skiers (I didn’t see a single boarder) and, in fine weather at least, the area has a decidedly relaxed “Sunday afternoon” feel about it.

On day two we sampled the wilder and more challenging (Seceda) side of Ortisei, which links to Santa Cristina (further up the valley) and from there on to Selva. 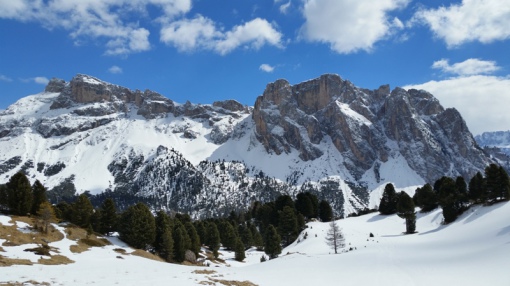 Here you will find both the highest and longest run in the Val Gardena, the splendid 10.5km descent (the Cucasattel) starting at 2520m and dropping all the way down to Ortisei at 1235m. 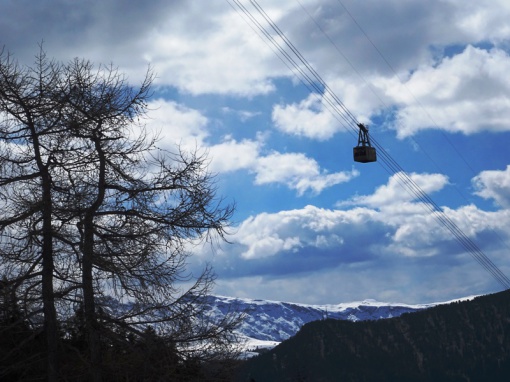 The upper half of this piste is open and offers sweeping views across the Trentino valley as far as the Brenta Dolomites. Further down you enter a canyon, not steep, but full of natural chicanes - great fun at high speed on the slick snow (it doesn’t get much sun). 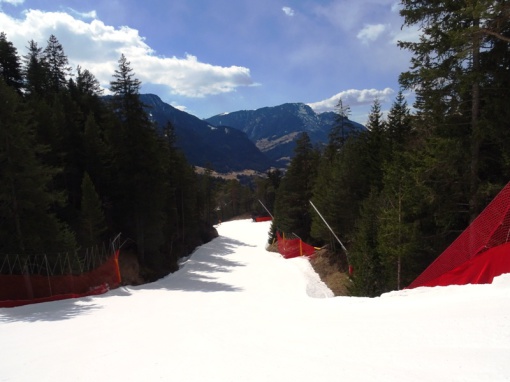 Lower still, the run mellows out as it enters woodland passing a series of impossibly cute pit-stops that would prove impossible to resist. 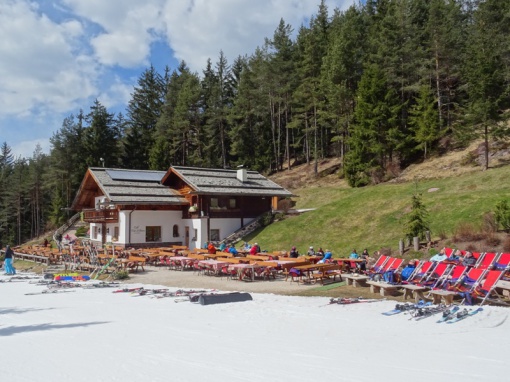 Café Val d'Anna, near the bottom of the Cucasattel run - Photo: weathertoski

Seceda may boast one of the finest descents in the Dolomites, but there is much more to this area than just one run. The main bowl here is high and open, offering a number of punchy intermediate pistes amidst spectacular high mountain scenery that is at least a match for the Alpe di Siusi area across the valley. 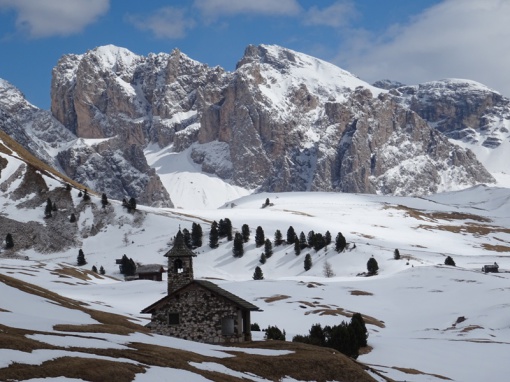 Needless to say there are plenty more mountain restaurants on the Seceda side, including the gorgeous Sofie Hütte, recommended to me by skiing legend Konrad Bartelski (who famously finished second in the men’s downhill on the nearby Saslong course in 1981), who rates it as one of the best in the Alps.

Like so many places here, a simple, no pretences exterior belies an extraordinarily high quality of food served by super-friendly staff in in a jolly Tirolean atmosphere. Advance reservations strongly recommended! 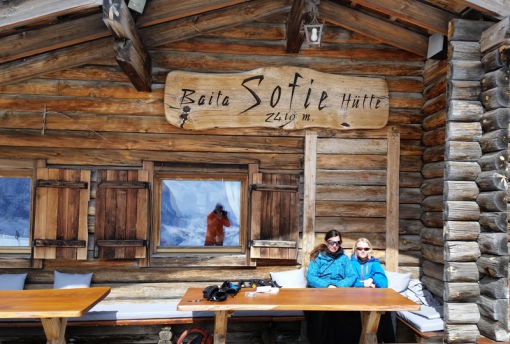 For those wishing to explore further afield, the Seceda area links to Selva (via an underground railway) whose extensive slopes include the aforementioned Saslong world cup run.

In many ways Selva is better suited to keen skiers, not least due to its plum location on the famous Sella Ronda circuit - a vast network of connected slopes that takes in numerous other resorts including Corvara and Arabba. 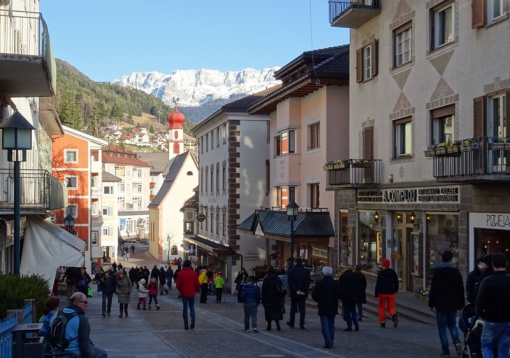 For families, however, there are compelling grounds to choose Ortisei as your main base. For a start, the centre is traffic-free and full of interesting bars, cafés and boutiques, making for a delightful late afternoon stroll once the lifts have closed.

The local ambience may be “quietly upmarket” but in the Cavallino Bianco, Ortisei also boasts one of the best family ski hotels in the world – an extraordinary mini-resort complete with four swimming pools, a dedicated 1250m² supervised play area, Lino Land, and activities for children of all ages throughout the day. 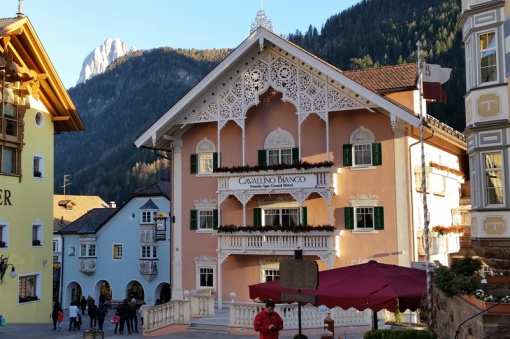 Cavallino Bianco Family Spa Grand Hotel, Ortisei - Photo: weathertoski
So successful has their uniquely family-focussed approach proved to be (you are only allowed to stay here with kids) it has won TripAdvisor’s “Best Hotel for Families Worldwide” award - three years running!

We stayed just three nights in the Val Gardena, but that proved more than enough for Ortisei to be considered among my very favourite ski resorts in the Alps.

No other mountains (that I have skied at least) capture the imagination quite like the Dolomites. And no other area is capable of offering such exhilarating skiing on so little snow. I will be back...

snow-wise offers 7 night holidays at the 4-star superior luxury Family Spa Grand Hotel Cavallino Bianco in Ortisei from £5500 for a family of four including flights, transfers, full board and childcare.