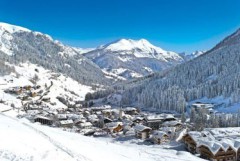 Snowfall is erratic in Arabba, as it is elsewhere in the Dolomites, but its slopes are among the most reliable in the Sella Ronda region.

There are several reasons for this: firstly the average slope height is that bit higher than in many neighbouring resorts, secondly many of Arabba's runs face due north. This, coupled with the area's legendary snow-making capabilities, means that (on-piste at least) good cover is virtually assured.

Snow quality is more variable though, except on the Marmolada glacier where it is usually excellent.

Marmolada glacier aside, Arabba (and the Sella Ronda region in general) has lots of trees to play in across all sectors, should the weather take a turn for the worse.

The Marmolada glacier nearly always has good snow, but note that this may not be the case on some of the runs involved in actually getting there.

Locally the best snow conditions are often found on the upper half of the Porta Vescovo sector.