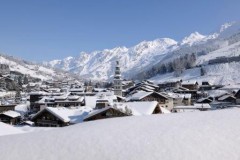 Right on the north-western edge of the Alps, La Clusaz bears the full brunt of weather systems coming in off the Atlantic. This means it gets lots of snow at altitude, but also has a higher than average risk of rain lower down.

The best snow is usually found in the higher, north-facing La Balme sector which often stays open until the end of April.

In poor visibility, head for the Beauregard sector, which has lots of thickly wooded terrain.

The best snow is nearly always on the La Balme sector, which is the highest and faces due north. The upper half of the mountain here is actually one of the most snow-sure ski areas in the entire Haute Savoie.

La Clusaz is one of our: