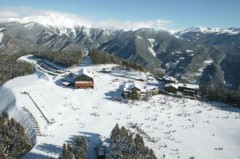 Pal’s slopes are densely wooded and hold their snow well. Whereas the runs above Arinsal are more open, but reach higher and face north-east.

Both areas have extensive snow-making and offer reliable on piste-skiing, despite some recent concerns over erratic early season snowfalls in the Pyrenees.

The densely forested slopes of Pal are the place to head in bad weather, as most of Arinsal's local runs are above the treeline.