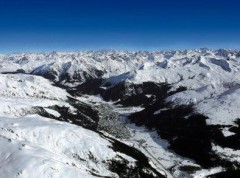 The Davos/Klosters area gets plenty of snow and its slopes reach a respectable height.

For the most part, snow reliability is good but there are a few weaknesses. The Pischa area is one, as it gets a lot of sun and can deteriorate rapidly later in the season. The lower sections of the runs down to Klosters (and especially to Serneus and Kublis) can also suffer when it’s warm.

The best snow is often found at the top of the Jakobshorn or beneath the Schifer gondola up on Parsenn.