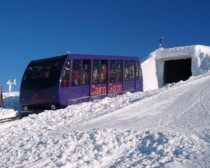 Weather and snow conditions are extremely unpredictable in Scotland. Yes, the sun does shine from time to time, but you need to prepare yourself for anything the elements can throw at you including blizzards, rain, hail and fog. Above all, however, you need to be prepared for wind, the main meteorological hazard in these parts.

That said, Cairngorm is probably the most reliable of Scotland's five ski areas.  It gets more snow than Glenshee, is higher than the Lecht and is further away from the warming influence of the gulf stream than both Glencoe and the Nevis range. However, it's all relative and advanced bookings are not recommended.

Some seasons (like 2009-10) can be truly great. In other seasons, Cairngorm might not even get going until February. In 2012 the entire snowpack had disappeared in early March, only for the slopes to re-open in April, and then stay open well into May!