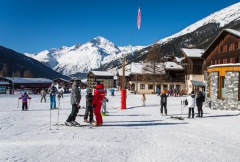 Although Val Cenis may have a relatively dry climate, it does have excellent snow preservation qualities. A lot of this is down to its orientation, as most of its slopes face north or north-west. However, broader scale geographical factors are also at play.

Val Cenis is set deep in the Alps and is therefore relatively sheltered from the warming influence of the Atlantic. This makes it better able to ride out any mild spells associated with warm fronts than other Savoie resorts further north and west. In short, once a good base is laid down it is likely to stay for the rest of the season.

Val Cenis is exposed to a number of microclimate phenomena. Most interesting of these being the famous ‘retour d’est’ whereby bad weather on the Italian side of the Alps spills over the border into certain adjacent resorts in France.

The ‘retour d’est’ is relatively localised, and can deliver huge snowfalls in the zone between Val d’Isère and Val Fréjus, with Val Cenis sitting in the sweet spot in between. Although it only occurs two or three times a season, it makes up for the times when Val Cenis misses out on snowfall coming from the north-west (the direction that most northern French resorts would look to for most of their snow), due to its position in the rain shadow of the Vanoise national park's numerous 3000m+ peaks.

There are lots of trees on the lower half of all of the sectors in Val Cenis, which offer good shelter should the weather close in.

The very best snow in Val Cenis is usually to be found in the bowl directly beneath the top "Met" chairlift (which reaches 2800m).

Read our blog on "How snow-sure and weatherproof is Val Cenis?"