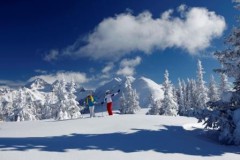 Schladming has a better snow record than you might expect for its height, due to the northerly orientation of its slopes and extensive snow-making – arguably the best in Austria.

But whilst it makes a good choice for an early holiday, altitudes are still modest and snow quality lower down is highly variable, particularly late in the season.

All of Schladming's main sectors have plenty of trees, making it an excellent resort to be in during heavy snow or poor visibility.

Locally, the Planai mountain often has the best snow and, thanks to exceptional piste management, can open as early as October.

The super-reliable Dachstein glacier is also only a short drive away.

Schladming is one of our: