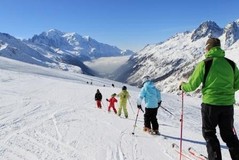 Snow cover in Chamonix is erratic at valley level but reliable at altitude, where most of the skiing takes place.

The slopes at Les Houches are low but shady and hold their snow surprisingly well. Snow quality is variable, however, and this sector is the most vulnerable to rain.

The Brévent and Flégère areas are higher, but face mostly south-east. Slush is therefore common quite early in the day as the season progresses.

Little Le Tour has a microclimate that makes it the snowiest village (as opposed to resort) in France. Snow here is reliable, but quality is again variable due to its modest altitude.

The best snow in the Chamonix valley is usually found on Les Grand Montets, which is north-facing and reaches an impressive 3200m.

Les Houches is the only area in the Chamonix valley with lots of trees, and is the place to head to in a storm.

The best snow is usually on the Grand Montets which has the highest average height and faces mostly north.

Chamonix is one of our:

Argentière (Chamonix) is one of our:

* Top 5 places to ski in the Alps in May