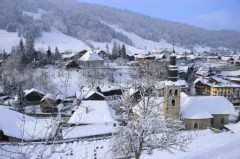 Much like Megève and La Clusaz, precipitation in Morzine and Les Gets is not a problem, but with 95% of the slopes below 2000m, altitude is! It can snow – lots – but the area is more vulnerable to warm weather than most and cover can be patchy lower down, especially at Le Pleney.

Locally the best snow is often found up on Chamossière, but if things don’t look great, most people head to nearby Avoriaz which is very accessible from Morzine and usually has better snow.

Morzine and Les Gets’ heavily wooded slopes afford good protection from bad weather. The few exceptions to this rule are the upper half of the Nyon and Chamossière sectors as well as the top of Mont Chéry.

In really bad visibility (and assuming there is enough snow) the densest trees are on the Morzine side of Le Pleney and around Le Grand Pré.

In poor snow, many people head for the higher slopes of Avoriaz.

Locally the best snow is nearly always in the Nyon-Chamossière sector, but the under-used, north-facing back-side of Mont Chéry is also worth considering.

Read our blog about Morzine