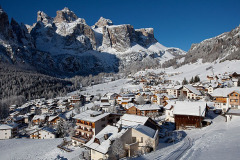 As in nearby Selva, snowfall is erratic in the Alta Badia region, but snowmaking and piste maintenance is state of the art. On-piste at least snow cover is therefore very reliable, but a low average height means that slush is an issue if it gets warm, and later in the season.

Generally speaking, there are plenty of trees for shelter in the Sella Ronda. However, Colfosco's local slopes are a little more open so, if visibility is poor, you may want to head to the other side of Corvara, especially the slopes above La Villa and San Cassiano.

Where to ski in poor snow conditions:

Snow cover is not usually an issue in Colfosco, or the Sella Ronda as a whole, due to state-of-the-art snow-making. However, snow quality is sometimes better in nearby Arabba, especially at Porta Vescovo and on the Marmolada glacier.