Flaine lives up to its snowy reputation

For decades the ski resort of Flaine has remained a firm favourite with British skiers, and particularly the Ladies' Ski Club whose 60th anniversary was celebrated here this year, with the staging of the British Schoolgirls' Ski Races where some 150 schoolgirls competed in three days of competitions.

My arrival in Flaine coincided with the Ladies’ Ski Club’s gala dinner on the last day of the Championships, attended by over sixty members in the delightful Chalet Michet restaurant, a short walk from my accommodation in the Alderbaren apartments in Flaine Forum. 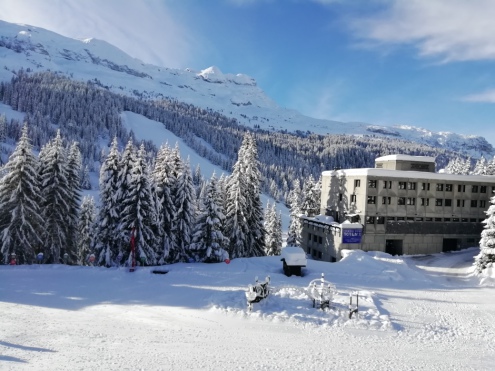 Apart from an abundance of snow and superb skiing, Flaine boasts several alternative activities including ice driving on a specially formed ice circuit, hot water spas and a wellness treatment centre, not to mention the 18 hole golf course that first opened in 1991 and is operational once the snow disappears.

The other advantage of Flaine is its easy accessibility from Geneva airport, a journey that takes little over an hour and half depending on snow conditions.

As with other high altitude resorts, it’s the steep, curvy road leading to the resort that is the difficult part of the journey. When we returned to Geneva airport, on a busy Saturday afternoon after a huge dump of snow two days earlier, we witnessed traffic problems half way down the mountain where a number of cars had stopped all over the place to put on chains, leading to a huge line of stationery cars on the way up. 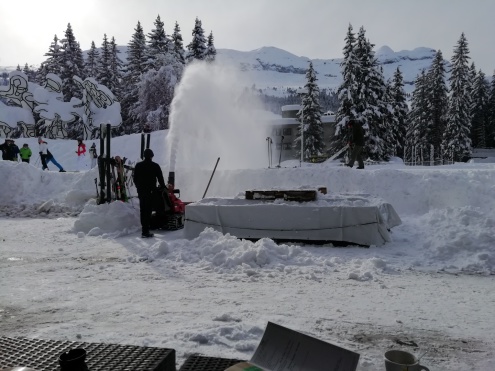 Fortunately my first day on skis this season couldn’t have been more perfect. Two days earlier a huge dump of snow had created idyllic skiing conditions both on and off piste, and the light fluffy snow on groomed slopes soon helped me get my ski legs back.

The entire Grand Massif skiing area is varied and full of interesting surprises, not that I had time to ski all areas. On the first day we took the Tête des Verds chairlift from the village and skied a couple of early morning runs in bright sunshine, before crossing over to the more difficult Desert Blanc chairlift that takes you to the top, from where stunning views of the towering Mont Blanc can be admired.

The Grand Massif’s geographical location and altitude guarantees an abundance of snow, something I was lucky to experience during my short stay, although on one day it did snow continuously for 24 hours. Flakes as big as old pennies were accompanied from time to time by strong winds. This made the already snow-laden trees and village roofs treacherous, with falling chunks of snow blown off by the strong winds making it quite hazardous to even  stroll around the village when all the lifts were closed - why I ended up shopping in the resort’s indoor shopping mall. 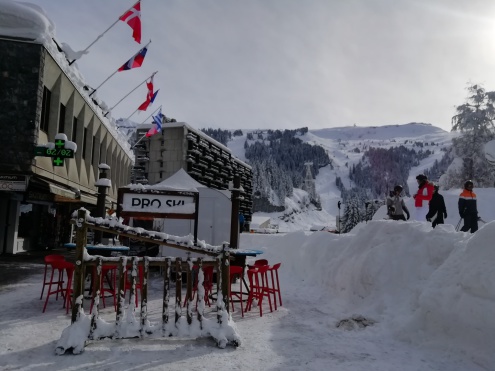 The following day we woke up to stunning clear blue skies but, even though all runs had been well groomed overnight by the resort’s 80-odd snow cats, the lifts remained closed due to possible avalanche danger until midday, when the avalanche experts decreed the area safe enough to ski on. However, it was all worth waiting for as I spent the afternoon again skiing in what can only be described as idyllic conditions.

The good news for Flaine fans is that the green light has recently been given to a 73 million Euro “cable-car project, the “Funiflaine”, which is currently going through public consultation. This would provide direct access to Flaine from Magland, in the valley below, a half hour’s drive from Flaine.

Pierre Claessen, Director of Flaine’s Office du Tourisme, tells me the project is already fully financed and construction is proposed to start this year, with an anticipated opening in 2022.

The 40 minute Funiflaine cable-car ride to Flaine will save motorists the hassle of driving up to resort, where car parking fees are also at a premium. There are also regular train services from Geneva airport to Magland, which will doubtless make the journey to the resort far easier for those flying into Geneva airport.