Is this the best piste in the Alps?

With literally tens of thousands of pistes across the Alps, what makes a truly great one?

Is it the length of the run, or the variety of terrain you encounter along the way? Is it the scenery, or is it more about the quality of the snow?

Ultimately, a truly great piste should have a bit of everything and, in this respect, the ’runs’ off the back of the Aiguille Rouge in Les Arcs are as satisfying as any we have ever encountered. 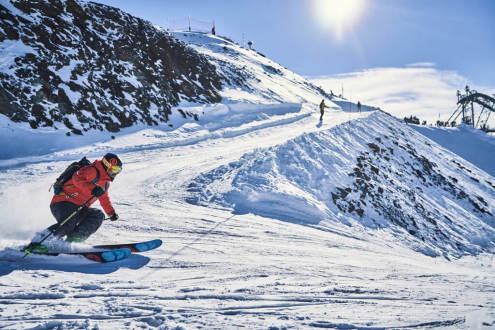 1. The length of the run

The descent from the 3226m Aiguille Rouge to Villaroger (at 1200m) is essentially one long piste (with a few variants) measuring 7km if you take the most direct route down, but perhaps 9km or more if you branch out along some of its lower woodland paths.

While that might not sound exceptionally long, compared to some of the claims about lengths of piste made elsewhere in the Alps, it certainly feels as long as any piste I have skied, with a 2026m vertical drop which would take a competent skier some 30-40 minutes to complete, even with minimal stops.

Only four other pistes in the Alps can claim a greater vertical descent: 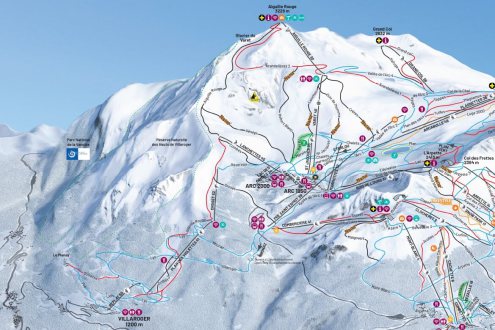 2. The variety of terrain

What makes the Aiguille Rouge one of my favourite pistes in the Alps is the sheer variety of terrain on offer as you drop 2000m vertical through a number of climatic zones.

The top (3200m) is what you might call “high alpine” terrain, offering wonderful 360° views across the Alps. A new sky-bridge viewing platform was installed here in 2018, allowing skiers (and pedestrians) to get up close and personal with the surrounding peaks and glaciers. 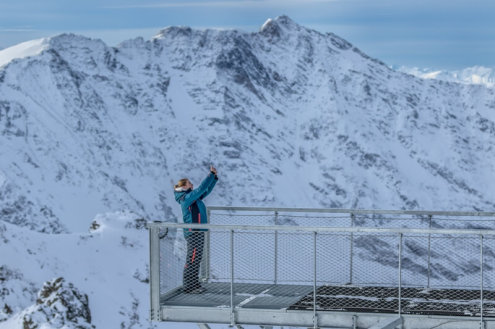 The sky bridge viewing platform at the top of the Aiguille Rouge is a great spot for selfies - Photo: lesarcs.com

Before you can really get started on the top part of the run on the Glacier du Varet, you must navigate a short, steep section first.

This is the steepest part of the entire 7km run, which can prove tricky for less confident skiers, though not as tricky as a few years back when the only access was via a very narrow and lumpy path that would test the nerve of even the most experienced skiers, especially when crowded. 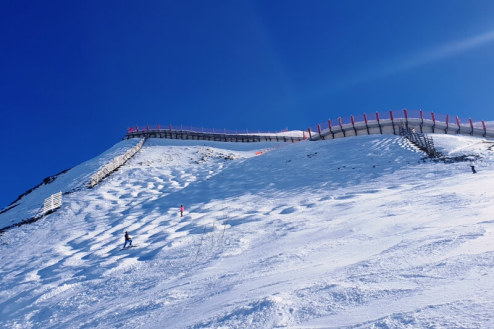 The very top of the Aiguille Rouge is the trickiest part of the entire piste - Photo: weathertoski.co.uk

Once you are past this, the glacier itself is a joy to ski. It may be not be the longest in the Alps, but it is wide and nearly always has great snow, making it ideal for high-speed carving. 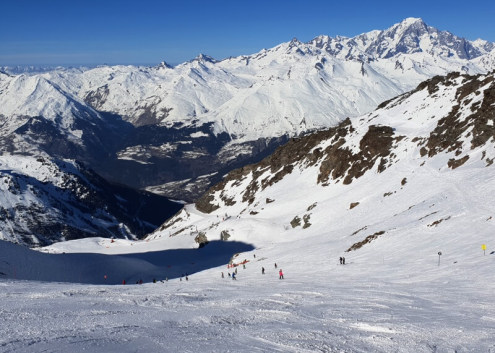 As the run leaves the glacier it narrows considerably, following the ridge-line high above Arc 2000 which becomes visible to the left below.

This part of the run is classified as black (the top is marked black/red) but is not difficult, with just a modest scattering of moguls to keep you on your toes. 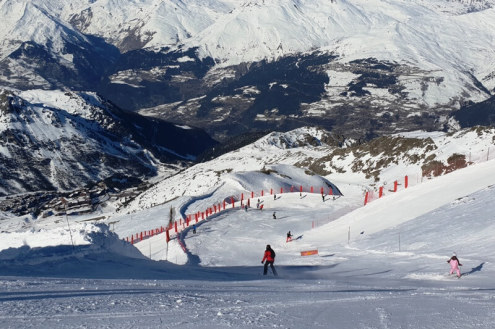 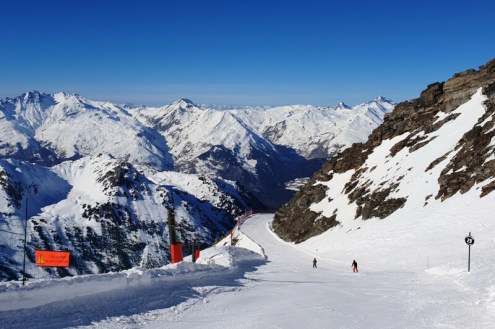 The mid-section of the Aiguille Rouge piste is classified as black but is not difficult, just a bit narrow in places - Photo: weathertoski.co.uk

The run eventually reaches the top of the Lanchettes chair, from where you can bale out and return to Arc 2000 by following the Combes black run to the left, or the blue Réservoir run, a little further along starting from the top of the Droset52 lift. But why would you? From here you have only completed about a third of the run with some of the most interesting sections still to come. 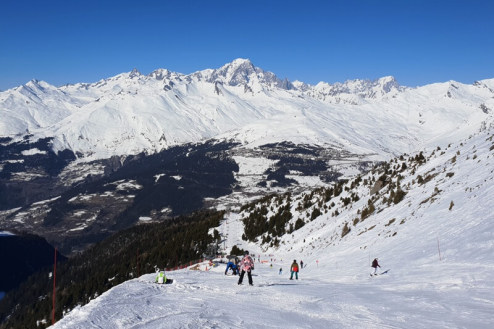 Skiers looking to return to Arc 2000 have two options along this stretch of the Aiguille Rouge piste - Photo: weathertoski.co.uk

From here the Aiguille Rouge piste becomes quite wide again, and is open to begin with, but becomes increasingly wooded as you descend.

The piste here is moderately steep and occasionally quite mogulled, which makes for an excellent work out for those who enjoy skiing fast, but if you are starting to feel the burn you can take things more slowly, and stop to take in the fabulous views across the valley towards Ste-Foy Tarentaise. 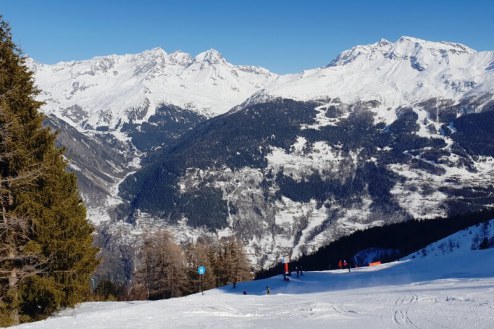 Those feeling the burn can pause to take in fabulous views towards Ste-Foy Tarentaise - Photo: weathertoski.co.uk

At this point there is another option to bale out and head back towards the main Arc 2000 bowl, via the blue Rhonaz run down to the bottom of the Pré Saint Esprit lift. This might make sense if you are short of time, or snow conditions are less than perfect, but it would mean missing out on one of the most peaceful and serene parts of the descent.

The bottom third of the Aiguille Rouge run is heavily wooded, with plenty of variants. Strictly speaking, if you want to claim that you have skied the entire run, stick to the route marked Aiguille Rouge (at this stage classified as red) which roughly follows the fall-line beneath the chairs.

There is also the option, if it is open, to ski a short, steeper section on the Solliet black run, which briefly branches off the main Aiguille Rouge piste. 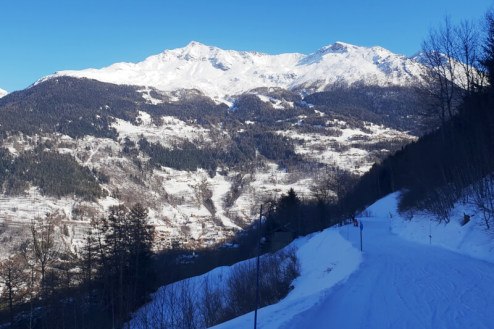 There are lots of gentle woodland paths at the bottom of the Aiguille Rouge run above Villaroger - Photo: weathertoski.co.uk

If you are hell-bent on maxing out the miles though, follow the flatter woodland paths (Lys, Sollières or Pré) which seem to go on for ever before finally reaching the sleepy hamlet of Villaroger. 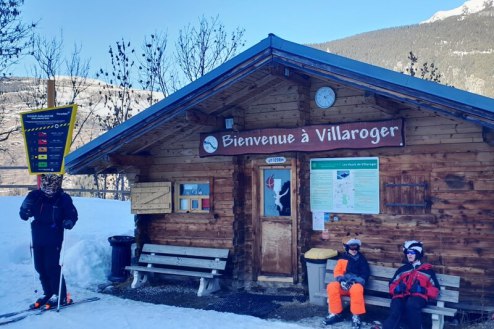 From Villaroger you return to Les Arcs via three consecutive (and ancient) chairlifts. 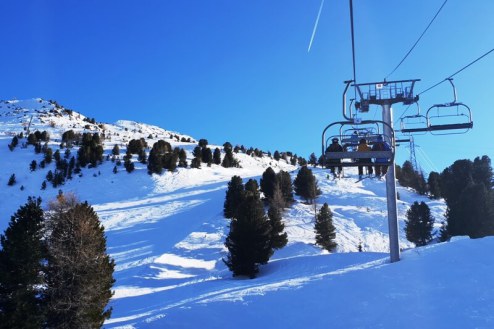 One of the three consecutive chairlifts returning towards Arc 2000 from Villaroger - Photo: weathertoski.co.uk

Snow conditions on the Aiguille Rouge are normally excellent, especially up top, where for the first few hundred metres you are mostly skiing on glacier.

Given the sheer length of the run, snow quality is likely to be more variable as you head lower down, but for most of the descent the slopes face north, which is always helpful when it comes to maximising snow preservation and quality.

The runs above Villaroger are also now well-endowed with snow cannons, meaning that you are unlikely to encounter any significant problems with snow cover between mid-December and late March. 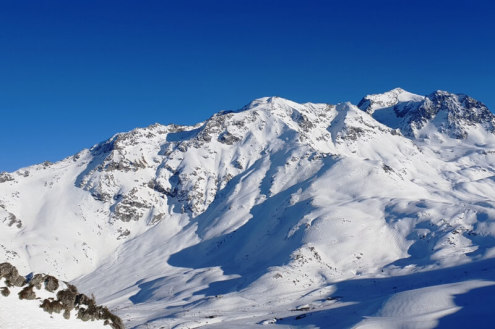 There is a huge variety of scenery on offer during the course of the 2026m vertical descent of the Aiguille Rouge. At the top, there are fabulous close-up views of some of highest peaks in the Vanoise, including the 3779m Mont Pourri, and on a clear day you can even see as far as the Jura, beyond Lake Geneva to the north. 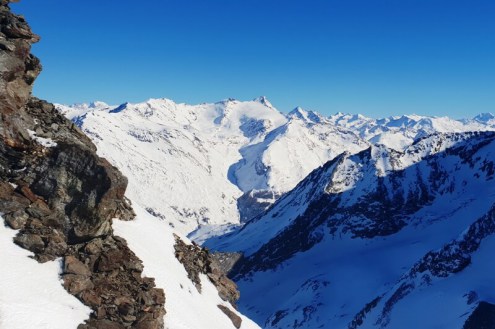 The top of the Aiguille Rouge affords fabulous views of the high peaks of the Vanoise - Photo: weathertoski.co.uk

Lower down, the scenery is very different but equally compelling. Once you are past the high ridge above Arc 2000, the piste swings to the right, opening up magnificent views of the Haute Tarentaise, with the resorts of La Rosière and Sainte-Foy-Tarentaise in full view across the valley. A little to the left (behind La Rosière) you can also see Mt Blanc, the highest peak in the Alps at 4810m. 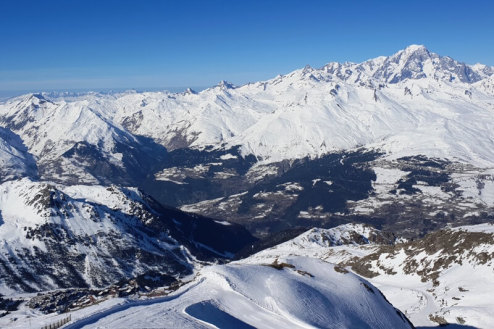 View towards La Rosière, with Mont Blanc beyond - Photo: weathertoski.co.uk

Last but not least, no great run would be complete without a good pit-stop! In the case of the Aiguille Rouge descent, this is the Chalet du Solliet (in fact the only option en-route) with its cosy alpine interior and giant sun terrace.

If, however, you’re looking for a well-deserved lunch in more authentic surroundings, we would recommend skiing all the way to the bottom of the Aiguille Rouge piste. 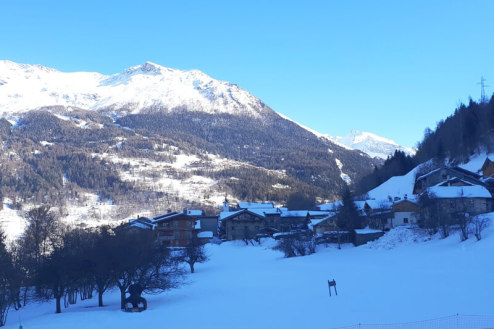 The sleepy hamlet of Villaroger at the end of the Aiguille Rouge piste - Photo: weathertoski.co.uk

Here you can chose from rustic La Ferme, near the Replat 50 lift in the hamlet of Le Pré (where the run ends and the lifts start), or the more expensive but highly rated Le Goyet in the village of Villaroger itself - a few hundred metres from the end of the slope (reachable on foot, by car or snow-permitting on skis, albeit technically off piste).

With thanks to:
Les Arcs Tourist Office

Looking for hotels or apartments in Les Arcs?  Click here