Mt Baker (Washington), "the world's snowiest ski resort" with an annual average of 16.5m has suspended skiing until further notice due to... insufficient snow!

It follows an exceptionally mild winter for the Pacific North-West (a region that includes Whistler, Canada), with frequent rain to high altitudes that has left base depths across the area way below par for the middle of March. 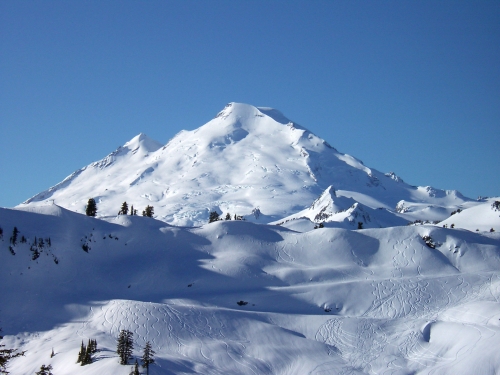 Mt Baker - how it should look in winter.

Mt Baker holds the record for the most snowfall ever accumulated in one season - a staggering 28.96m in 1998/99 - but its maritime climate makes it prone to fluctuations in temperature, and the current situation is not unprecedented.

According to Duncan Howatt, General Manager of the Mt Baker ski area, you might see something similar every 15 years. But, more often than not, the resort bounces back. In 2005, skiing was suspended the very same week, but quickly re-opened following heavy snowfalls, finishing the season with a respectable 2m base.