What is the Foehn?

And how does it affect weather in the Alps?

The Foehn (or Föhn) is a familiar term amongst skiers, but one that is often misunderstood and blamed for all manner of weather.

The Foehn is best known as a southerly wind that occurs when an established southerly airflow approaches the high ground of the Alps. 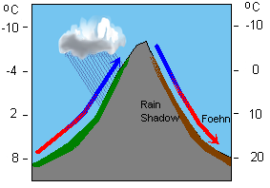 As the air is forced to rise it expands and cools precipitating out its moisture on the windward (southern side) of the mountains.

As the air descends the leeward (northern) side it is compressed resulting in a dry, warm turbulent Foehn that can melt snow at a ferocious rate.

The Foehn is often a prelude to bad weather approaching from the west. But whilst it may be raining/snowing on the southern side of the Alps, the Foehn often delays the onset of bad weather further north and east.

Although we normally think of the Foehn as a southerly wind, the Foehn effect can equally apply the other way round. The northern Foehn sees showers piling up on the northern flanks of the Alps and fine but gusty conditions further south.

Sometimes the dividing line between these conditions is very clearly delineated. This boundary is called a Foehn wall (pictured below). 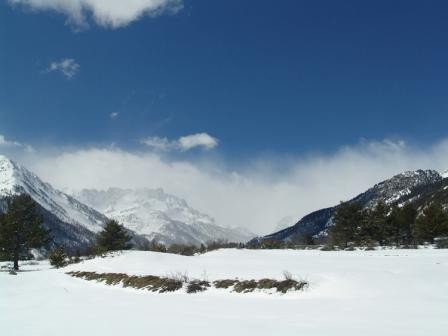 A Foehn wall above the Col du Lautaret, often a natural divide between the weather in the southern and northern French Alps

The Foehn effect has different names across the world. In the Rockies it is called the Chinook and in California, the Santa Ana.