Snow conditions remain excellent for early December across much of the Alps. The weather has also been great this week with plenty of sunshine, especially at altitude.

Many northern Alpine resorts are also in very good shape, particularly the higher French ones such as Val d’Isère, Tignes and Val Thorens. More generally, however, snow conditions in the northern Alps are more “normal” for early December with decent cover at altitude but often quite thin or patchy cover low down.

This is completely normal for the time of year though, and snow is forecast for the northern Alps (e.g. Portes du Soleil, Jungfrau region, Arlberg region) early next week.

Across the pond, conditions are quite mixed, but there is some excellent skiing to be found, especially in Utah and California.

Snow conditions are generally pretty good in Austria for early December, especially at altitude and/or in the southern Austrian Alps.

Obergurgl (85/175cm), close to the Italian border, is skiing as well as anywhere right now with 21 of its 25 lifts open. Nassfeld is another entirely non-glacial resort that has great snow cover for the time of year (120cm up top) and will open for the season tomorrow.

A little further north-west, Ischgl (20/70cm) currently offers the greatest extent of open pistes in Austria (176km), thanks to both its altitude and extensive snow-making.

Closer to the northern edge of the Alps, resorts are not doing quite as well. Lech (35/45cm) may be up and running but is still heavily reliant on artificial snow, despite having seen natural snow fall last weekend, and Saalbach (5/35cm) also has plenty of man-made snow in the mix. However, these northern Austrian resorts are set to see fresh snow early next week, especially in the west (e.g. Lech, St Anton). 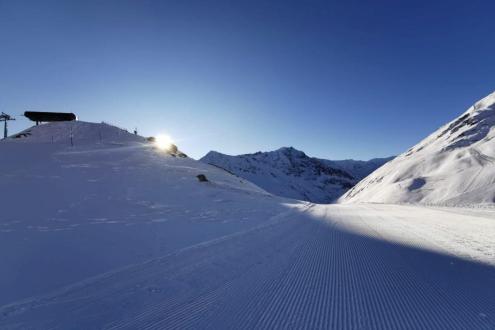 Snow conditions in the southern Alps are uniformly fantastic. Isola 2000 (150/220cm) now has most of its lifts open and is skiing as well as anywhere. A little further north, Serre Chevalier (60/200cm) also has masses of snow and will open at the weekend.

There is also good snow to be found in the northern Alps, at least at altitude, with Val Thorens (127/151cm) and Val d’Isère/Tignes (65/160cm) as good as anywhere at this stage. It’s a more mixed picture further north in the Portes du Soleil (most of which isn’t yet open). Higher up in Avoriaz (80/155cm), currently open at weekends, there is lots of snow and conditions are excellent.

Lower down, however, more snow is still needed in the likes of Morzine and Châtel. The good news is that new snow is likely in these areas on Monday. 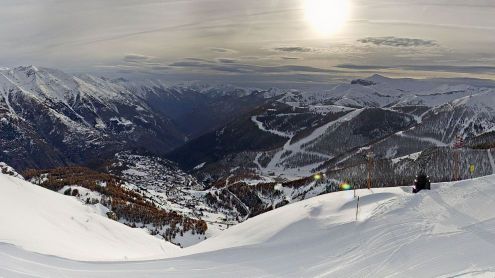 Just about all parts of the Italian Alps have fantastic snow cover for early December, with more and more resorts opening all the time. Cervinia (67/285cm) remains the best bet in terms of extent but, further east, Livigno is giving it a good run for its money, with 62 runs open and 72/134cm of settled snow depending on altitude.

Further east, more and more is opening up in the Dolomites where there is also great snow cover for early December. The Alta Badia area (30/130cm) now has 86km of slopes open, while Kronplatz (60/120cm) has 68km. 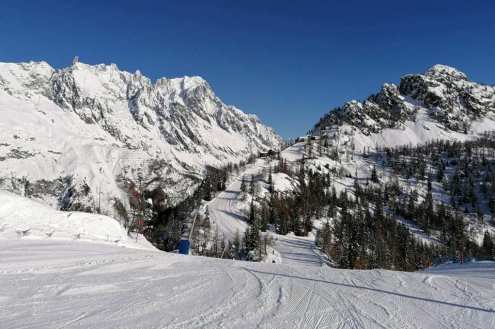 Snow conditions are generally pretty good in Switzerland, although some of the lower northern Swiss resorts such as Wengen (which is partially open with 35cm up top) could still do with some more snow lower down.

The good news though is that Wengen and other northern Swiss resorts such as Villars (0/50cm), Adelboden (25cm upper) and Engelberg (0/145cm) are likely to see significant snow early next week.

For the best snow right now, you will need to head further south to the likes of Saas-Fee (65/255cm) and Andermatt (10/320cm) both of which have had fabulous starts to the season.

Further east, but still in the southern Swiss Alps, St Moritz is also in good shape with 50/120cm on its Corvatsch mountain. 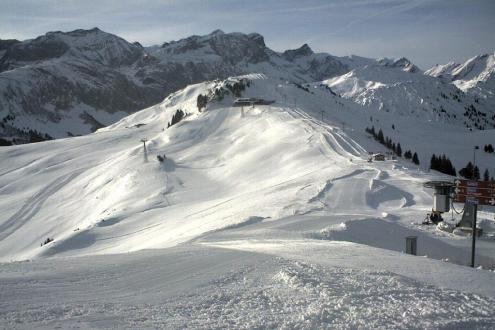 Reasonable snow cover at altitude in Lenk in the northern Swiss Alps, but more would be welcome – 5 December 2019 – Photo: lenk-simmental.ch

The higher Pyrenean resorts still have decent snow cover thanks to the successive storms in early November. However, there has been a thaw lower down, where conditions are becoming more patchy. Among the better bets in the Pyrenees this week are Spain’s Baqueira Beret (60/90cm), where all of its 104 runs are now open, and France’s La Mongie (70/130cm) with 36 runs currently in operation.

Lots of resorts are up and running in Scandinavia, with the most extensive skiing in Norway’s Hemsedal (88cm upper base). Sweden’s leading resort, Åre has 63cm up top and 9 open pistes.

There is currently insufficient snow for skiing in Scotland, but next week’s forecast is looking very promising with lots of snow expected across all Scottish ski areas. 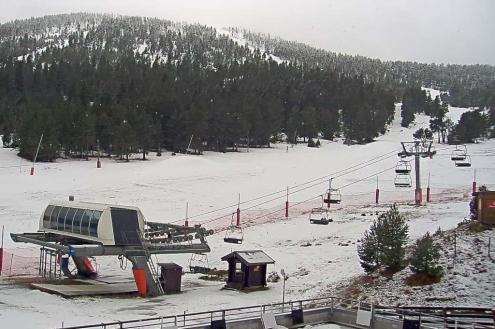 Decent snow cover at altitude in the Pyrenees but more is now needed lower down. This is Formiguères – 5 December 2019 – Photo: formigueres.fr

California’s Mammoth has seen 30cm of new snow in the last couple of days and is now open top to bottom with 68 trails and an upper base depth of 165cm.

Over in Colorado, Vail (66cm upper base) has not seen as much new snow but still has 60 trails available, with snow forecast later this week.

Whistler (40 cm upper base) has opened a handful of trails but does not have much natural snow as yet. Snow is forecast over the next couple of days but only at altitude.

For better snow conditions you need to head further inland, where Lake Louise (82/98cm) leads the way with 104 open trails. 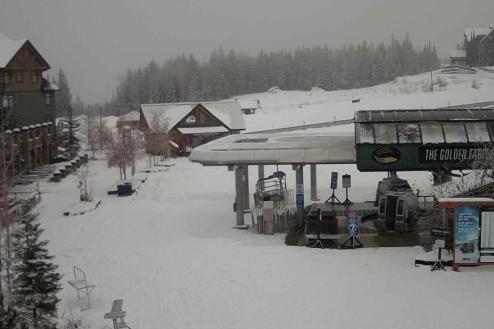 Our next full snow report will be on Thursday 12 December 2019,