There is something of a north/south divide when it comes to snow conditions in the Alps right now. For the time of year, snow cover is generally very impressive (even exceptional in places) across the southern Alps. This includes the Italian Alps, the southern French Alps (roughly south of Alpe d’Huez/Les 2 Alpes), the southern Swiss Alps roughly in a triangle from Zermatt up to Andermatt and back towards St Moritz, and the southern Austrian Alps from Obergurgl across into the Osttirol and Carinthia (e.g. Nassfeld).

Across the northern Alps, the snow situation is much more variable, thanks in part to the damage caused by the warm Foehn winds over the weekend. Some resorts (e.g. Val d’Isère, Tignes) are in great shape, but most resorts in the northern half of the Alps could do with more snow, especially lower down where cover has become very patchy.

New snow will improve conditions across parts of the northern Alps over the next few days, especially in France (e.g. Flaine, Chamonix), Switzerland (e.g. Jungfrau region, Laax) and western Austria (e.g. Lech, St Anton), but there will also be some rain lower down.

Snow conditions remain excellent across the southern Austrian Alps, and resorts close to the Italian border.

Glaciers aside, Obergurgl stands out as the one of the best options right now, with 100/200cm of settled snow and most of its pistes now open. Nearby Sölden (10/246cm) is another option, with about half of its ski area now open.

Further north in Austria the Foehn has taken its toll, especially lower down. Lech, for example, still plans to open this Friday but has lost most of its natural snow, although some is now forecast later in the week. 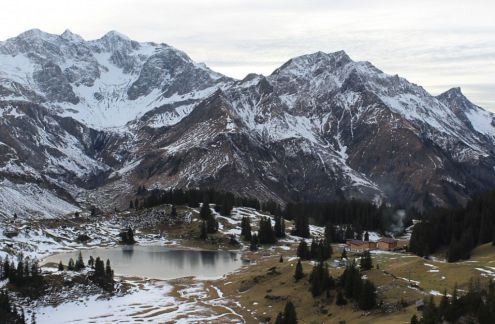 The Foehn has melted much of the snow across the northern Alps. This is Warth-Schröcken in the Austrian Vorarlberg – 26 November 2019 – Photo: warthschroecken.com

Snow conditions are excellent across the southern Alps, but more mixed further north. In the far south, a huge amount of snow (1.2m) fell last weekend in Isola 2000 (100/200cm), which will open its doors on Saturday.

Further north, yet still in the southern Alps, Montgenèvre (80/110cm) is also doing well, and is now opening at weekends until its season officially starts on 5 December.

In the northern French Alps, only a few resorts in the south-east of the Savoie could be considered as very snowy, the most well-known of these being Val d’Isère and Tignes. The latter has been open for some weeks now, but the L’Espace Killy ski area, as a whole, will officially open this weekend, with around 50/150cm of snow depending on altitude.

Elsewhere in the northern French Alps, Val Thorens (65/85cm) is also open but with less snow, although there is still some reasonable piste-skiing on offer. Snow cover in the lower parts of the 3 Valleys (not yet open) is now a bit patchy though. 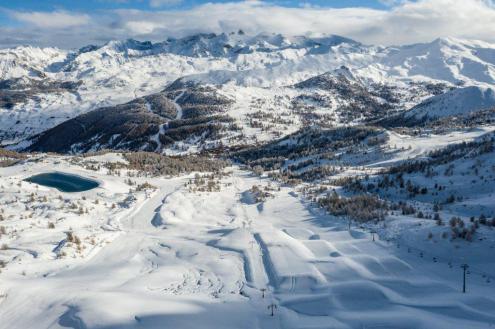 Snow conditions in the Italian Alps are excellent for the time of year.

Cervinia (65/280cm) remains the best option in terms of extent (with most of the area now open) but a number of other resorts are also partially open. These include as Madonna di Campiglio (60/175cm) and Cortina (30/130cm), with more set to join the action this weekend (e.g. Bardonnechia, Alta Badia). 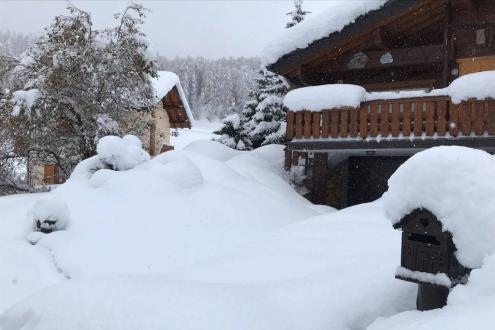 Snow conditions are much better in the south of Switzerland than in the north. Two resorts that are doing particularly well with all the recent snow are Zermatt (30/100cm) and Saas-Fee (85/150cm) although neither are anything like fully open as yet.

Andermatt is also in great shape (40/300cm) and currently open at weekends, opening daily from 7 December.

The northern Swiss Alps though have lost quite a bit of their snow due to the recent Foehn, particularly lower down. Adelboden. for example, has 7 km of pistes available on a very meagre upper base of just 20cm. 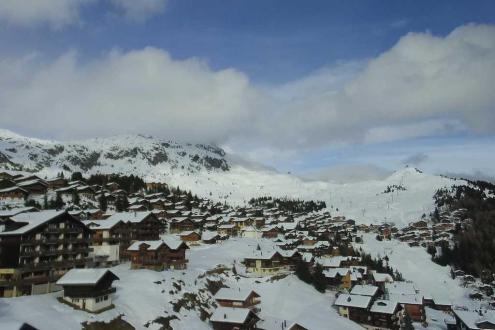 Plenty of snow in the Aletsch Arena in the southern Swiss Alps – 26 November 2019 – Photo: bettmeralp.ch

The weather has turned milder in the Pyrenees but there is still plenty of snow thanks to the recent storms. Spain’s Baqueira Beret (60/90cm) has around 35km of pistes open, while Andorra’s Pas de La Casa (20/45cm) has around 20km.

Lots of Scandinavian resorts are also partially open, including Finland’s Levi (45cm upper base) and Norway’s Hemsedal (85cm upper base). 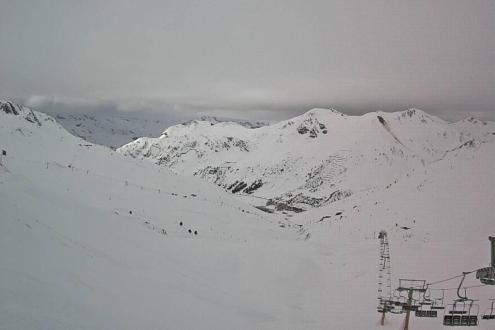 Good snow cover across most of the Pyrenees. This is Spain’s Astun – 26 November 2019 – Photo: bergfex.com

Most of the western US is still in pre-season phase, meaning that while there are quite a few different resorts offering skiing, most of it is on very limited basis.

One of the better bets right now is Colorado’s Winter Park where 22 trails are open on a 60cm base (a mix of natural and man-made snow).

Over in California, Mammoth (35cm upper base) has a handful of runs open but is still heavily reliant on artificial snow.

Several resorts in western Canada are now partially open, most of them in the interior. Lake Louise remains the best bet with 78 trails now open, 25cm of fresh snow this week and an 81cm upper base.

Further west, Whistler is scheduled to open on Thursday but has very little snow right now, with an upper base depth of just 15cm or so. 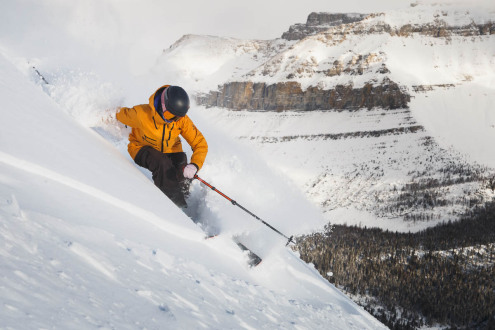 Our next full snow report will be on Thursday 28 November 2019,