The Alps are currently under the influence of a mild south-westerly airflow, with a few showers across the north-eastern Alps this morning (snow 1200-1400m). However, with air pressure being quite high, most places are dry with the best of any sunshine the further south and west you are. 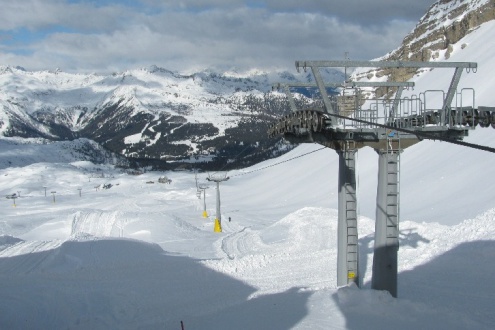 Plenty of fine weather in the Alps this week, but it is mild. This is Madonna di Campiglio – 16 February 2021 – Photo: funiviecampiglio.it

Tonight, a weak weather front will bring further showers to some northern and western parts of the Alps (snow 1400-1800m), though not amounting to much. Wednesday then looks like being mostly sunny before further weak weather fronts approach from the west late on Thursday.

Right now, publicly accessible lift-served skiing in the Alps remains limited to Austria and Switzerland. Some Italian resorts were due to open in the next few days, but this has now been put back until 5 March at the earliest.

Snow cover across the Alps is still generally impressive though, meaning that there is plenty of good skiing on offer in both Switzerland and Austria, especially on-piste. Off-piste, the change to milder weather means that snow conditions are a little more variable, especially lower down. However, there is still some excellent skiing to be found for those ‘in the know’ or with the help of a guide.

The Alps are currently under the influence of a north-easterly airflow from Siberia, with exceptionally cold temperatures in the eastern Austrian Alps today. It is a little milder further west and south though. 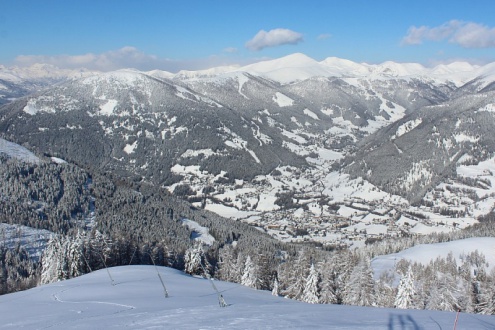 Temperatures are not expected to get above -15°C today in Obertauern (1700m), in the central-eastern Austrian Alps, where there will also be a penetrating breeze meaning that with the windchill it will feel closer to -30°C up top. These sorts of temperatures are dangerous for the ill-prepared so, if you are skiing in the eastern Alps today, dress accordingly!

The further south and west you are in the Alps today the milder it will be, with freezing levels close to 2000m in the far south-west (e.g. Isola 2000).

Most of the Alps will be sunny today but with more in the way of cloud across the northern and north-eastern Alps, where there will be a few light flurries in places.

On Friday an area of low pressure will move into the south of France bringing some snow to the French Alps, western Italian Alps and western Swiss Alps. The eastern Alps should remain bright but will still be very cold.

The weather in the Alps remains unsettled, with further snow due at times over the next couple of days. 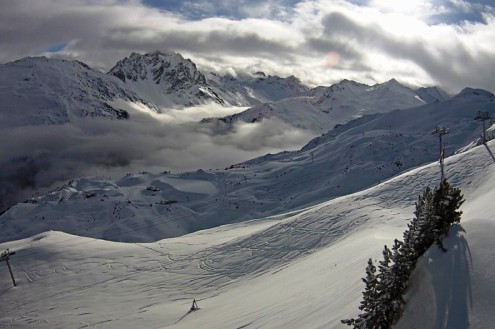 Updated: 10.45am Tuesday 9 February 2021 - More snow for many parts of the Alps… The weather in the Alps remains unsettled, with further snow due at times over the next couple of days.

There are some snow showers to relatively low levels today across the eastern Alps, notably in Austria. Further west, it is dry with plenty of sunshine, especially in the French, western Swiss and western Italian Alps. This fine weather will not last though, with new weather fronts set to move in to the west later today, with a rain/snow limit between 600m and 1000m.

Tomorrow will see further showers or longer spells of snow to relatively low levels across most of the Alps, with moderate accumulations in many places. By Thursday any snow flurries should be confined to the northern fringes of the Alps, while the central and southern Alps should be mostly sunny but windy with a “North Foehn” blowing.

After a very mild few days in the Alps, the temperature has been falling today as a cold front moves west to east across all parts. 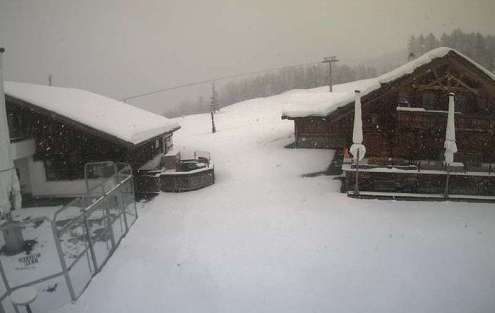 Most regions are also seeing (or have seen) some snow, heaviest in the southern Alps, especially in south-east Switzerland (e.g. St Moritz) and the central-eastern Italian Alps (e.g. Livigno), where storm totals are expected be in the range of 30-40cm by tomorrow morning.

The rain/snow limit was initially around 1200-1600m today but will fall to well below 1000m in most parts by this evening.

The weather in the Alps will remain rather unsettled next week, with further weather fronts moving from west to east across the Alps from time to time. This means that all areas will see at least a little snow in the coming days, with the west likely to see the most significant falls. The rain/snow limit will oscillate between 500m and 1400m.

It is another mostly dry and very mild day in the Alps, with some sunny spells but also some areas of (mostly high) cloud drifting around. These could just be thick enough to produce a few spots of rain (snow 1900m) in the northern foothills of the Swiss Alps later in the day. The Foehn will also be blowing, accelerating the thaw at lower altitudes in the central and northern Alps. 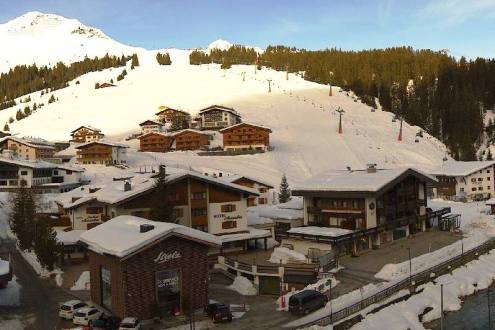 Sunny and mild in the northern Alps this morning. This is Lech – 5 February 2021 – Photo: lechzuers.com

Saturday will remain mostly dry and very mild as the Foehn strengthens further across the northern half of the Alps. The northern Alps will also see the best of any sunshine though, whereas cloud will thicken in the south-western Alps with some showers likely later in the day, especially close to the French/Italian and French/Swiss border regions (snow 1500m).

Sunday will see a more general deterioration in the weather, with weather fronts moving from west to east across the Alps. The heaviest precipitation will fall in the southern Alps and close to the Swiss/Italian and Austrian/Italian border regions, with a rain/snow limit falling from about 1500m to under 1000m later in the day.

Due to Covid-related restrictions, publicly accessible lift-served skiing in the Alps is still limited to Switzerland and Austria. Snow conditions are currently quite poor lower down where high temperatures and relatively humid air have led to wet and sticky pistes in places.

For uniformly grippier, more wintry snow, you need to stay above about 2300m. Snow conditions will generally improve again from Sunday onwards as temperatures drop.

It is another very mild day in the Alps today, with some sunny spells but also quite a lot of high cloud drifting around. The Foehn will be blowing in some central and northern parts, where temperatures will readily climb into double digit figures in the lower valleys. 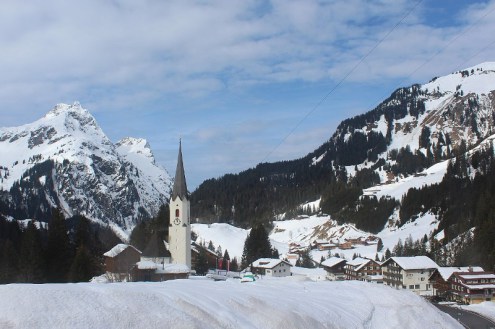 Signs of warmer weather this week are evident in Schröcken in the Austrian Vorarlberg – 4 February 2021 – Photo: warth-schroecken.at

The weather will remain mostly dry and very mild on Friday, and at first on Saturday, as the Foehn becomes stronger in the northern Alps. Late on Saturday there will be some showers in the south-western Alps which will become more widespread overnight and on Sunday as a cold front moves through. The rain/snow limit will start high (around 1800m) before falling to below 1000m late on Sunday.

The ski areas that are likely to see the most snow this weekend are the higher resorts of both the central southern and south-eastern Alps (e.g. Passo Tonale, Arabba) and of Switzerland and Austria closest to the Italian border (e.g. St Moritz), all of which could see 20-40cm above 2000m.

Due to Covid-related restrictions, publicly accessible lift-served skiing in the Alps is still limited to Switzerland and Austria. Snow conditions are currently quite poor lower down, where high temperatures and relatively humid air have led to wet and sticky pistes in places.

For uniformly grippier and more wintry snow, you need to stay above about 2300m. Snow conditions will generally improve again from Sunday onwards as temperatures drop.

The weather in the Alps remains very changeable, although temperatures are on the mild side with the continuing threat of rain at lower altitudes as most of the Alps sit to the south of the main polar front (the boundary between cold/warm air). 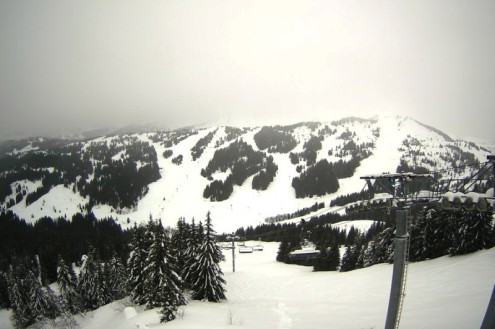 The rain/snow limit will be around 2000m in the Portes du Soleil today. This is Les Gets – 2 February 2021 – Photo: lesgets.com

Today, there will be further showers or longer periods of rain/snow (with the snowline rising to about 2000m) in the the north-western Alps, including the northern French Alps north of Grenoble, the western and northern Swiss Alps (e.g. Verbier, Jungrau Region, Engelberg, Laax) and the far west of Austria (Arlberg region).

The further south and east you are today, the drier it will be, and the better chance you will have of seeing some sunshine.

The weather in the Alps will remain broadly similar and stay mild for the rest of the week, though it will generally be a little brighter on Thursday and Friday.

The mild (and in places damp) weather this week means that snow quality will be highly variable, especially in the north-western Alps, where there will be wet snow lower down in resorts such as Villars, Gstaad, Grindelwald, Flumserberg and St Anton. For more consistent “wintry” snow quality you will need to stick to slopes above 2000m this week, ideally even higher.

Note that the avalanche situation remains complicated in the north-western Alps, with large spontaneous avalanches still possible. Furthermore, weak layers in the snowpack will continue to pose a danger later in the season, even if/when the current situation has stabilised.