The weather in the Alps will remain relatively mild for the next few days, until a cold front introduces a more wintry feel on Friday and over the weekend. 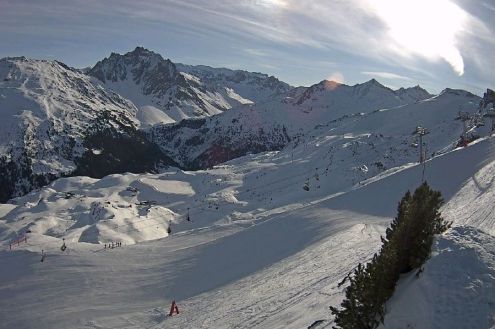 A lot more sunshine is expected in the Alps from today until Thursday, with just a few areas of high cloud drifting across the sky from time to time. It will feel pleasantly mild at altitude, but somewhat colder in the shady valley bottoms.

A cold front will reach the western Alps late on Friday, spreading further east overnight and on Saturday. The intensity and distribution of snow generated by this front is still uncertain, though it does look as if the western Alps will be most favoured, with 15-30cm of snow possible above 1500m by Saturday in the French Alps (especially in the north), many parts of the Swiss Alps and some parts of the western Italian Alps. The rain/snow limit will generally start at around 1200-1500m on Friday before descending to well below 1000m later.

By Saturday most of the snow will have transferred to the eastern Alps (i.e Austria), and will be lighter and patchier.

Any snow flurries should die out over the course of Sunday, though it will remain on the chilly side, continuing so into the first part of next week.

High pressure is still dominating the weather in the Alps and will continue to do so until the end of the week. A cold front will introduce colder air to all regions on Friday, but exactly where will get how much snow is still somewhat uncertain. 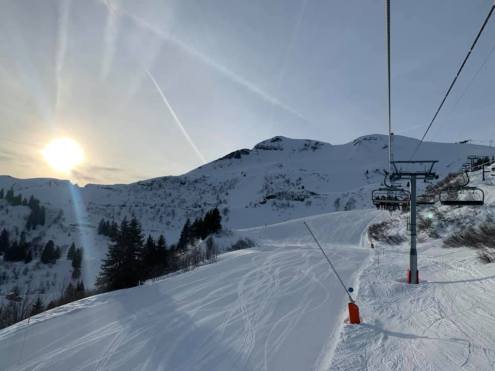 Back to today and, except for a few areas of high cloud here and there, it will be another dry day with plenty of sunshine. It will feel relatively mild at altitude, the quality of the snow will remain pretty good on-piste at least, thanks to the low humidity and angle of the sun. Just watch out for worn or icy patches on some lower slopes, especially in the northern Alps.

Over the next few days there will be relatively little change in the weather, though some thicker areas of cloud may brush the northern Alps at times. As previously mentioned, a cold front will then introduce much colder air from the north on Friday, with some snow to relatively low altitudes, probably heaviest in the western Alps (e.g. France, western Italy).

The finer detail of this storm should become clearer in the next couple of days. Whatever the case, though, the Alps will be cold next weekend.

A weak cold front brought the faintest of dustings to the north-western fringes of the Alps last night. One or two further flurries (1000-1200m) are still possible today close to the northern foothills, but for most regions it will be another fine if rather chilly day. 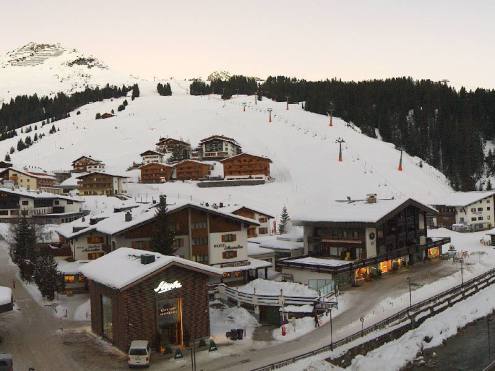 A largely fine day in Lech with just the outside chance of a flurry later – 10 January 2020 – Photo: lech.com

The weekend’s weather is also looking good, with lots of sunshine above any low-level valley cloud/fog and pleasantly mild daytime temperatures.

Next week will start fine too, though weather fronts may also bring a little rain (snow 1700-1900m) to some northern parts of the Alps mid-week.

Updated: 9am Thursday 9 January 2020 – A dusting of snow for north-western foothills tonight…

After a mostly fine week of weather in the Alps, a dusting of snow is expected across some northern parts tonight and tomorrow before it turns sunny again everywhere over the weekend. 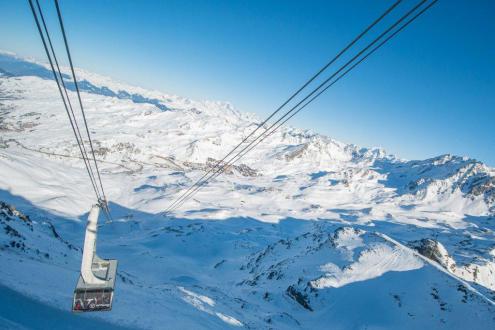 This snow comes courtesy of a weak cold front that will approach the north-western Alps later today, however, it won’t amount to very much and will probably only be confined to the northern fringes of the French Alps (e.g. Portes du Soleil) and parts of the Swiss Alps (e.g. Vaud, Bernese Oberland). Expect 1-3cm of snow in these regions at best.

Over the weekend the weather will turn fine again just about everywhere, although there will be some cloud in the eastern Austrian Alps, and some low cloud/fog in some of the valleys.

Snow conditions in the Alps remain fairly good for early January, although snow cover remains thin or patchy at very low altitude across some northern parts of the Aps (e.g. Morzine, Gstaad).

No significant snow is expected for at least 10 days, or possibly longer, and the weather will also be fairly mild. However, at this time of year the sun is still low in the sky so the snow should hold up fine, even if it may be a bit icy or worn on some lower slopes.

The Alps are currently on the warm side of a strong Atlantic Jet Stream which will continue to push storms across northern Europe over the coming days. The Alps will stay predominantly dry, under the influence of higher pressure. 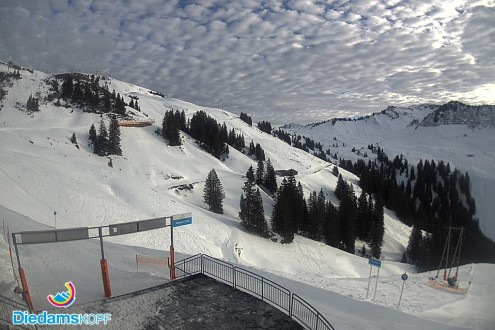 That said, a weak weather front will reach the Alps late on Friday, with a few centimetres of snow possible close to the northern foothills of the Alps. However, significant widespread precipitation is not expected.

Back to today and there are some areas of high cloud drifting around, although most places will be dry with some sunshine, the best of this in the south and west. It will feel pleasantly mild in any sunshine, but the quality snow on-piste should remain pretty good thanks to the low angle of the sun and low humidity.

More generally, snow conditions remain pretty good across most parts of the Alps even if cover is now thin or patchy at low altitude in parts of the north (e.g. Morzine).

Although powder may be hard to find, it is still possible here and there with good local knowledge, especially at high altitude and/or in the north-eastern Alps where up to 50cm of new snow fell last Saturday.

It’s another mostly dry day with plenty of sunshine across the Alps. That said, a very weak weather front has brought more in the way of cloud to some of the northern foothills, especially in northern Austria (e.g. near Salzburg) where the odd flurry (1000m) cannot be ruled out. 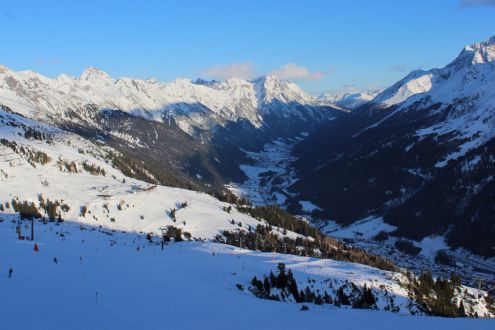 A lovely end to the day in St Anton – 7 January 2020 – Photo: stantonamarlberg.com

The rest of week also looks mostly dry. Another weak front may bring the odd shower or flurry close to the northern fringes of the Alps late on Friday, but no significant snow is expected.

Snow conditions remain pretty good in the Alps, although some lower pistes are now a bit worn or icy. Most of the obvious powder has now been tracked out but some pockets can still be found here and there, with the help of a guide, especially in the north-eastern Austrian Alps.

It’s another great day for skiing across most of the Alps today, with lots of sunshine, relatively mild temperatures and low humidity, meaning that the snow will stay mostly firm all day, even on south- facing slopes. 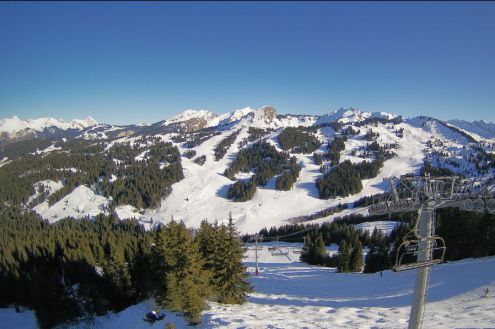 As expected, Saturday saw some significant snow across the north-eastern Alps, nearly all of it in Austria and heaviest in the east of the Tirol, the northern Salzburland, northern Styria and parts of Upper and Lower Austria.

These areas saw 20-40cm of new snow above 1500m (with 50cm in places), with a rain/snow limit starting at around 1500m on Friday night but falling to the valley bottoms during the day on Saturday. Anyone lucky enough to have been in these parts of Austria on Sunday would have enjoyed a truly fabulous day on the slopes.

As for the rest of this week, the weather will be mostly dry and quite mild with just a few light showers or flurries close to the northern fringes of the Alps on Tuesday, and perhaps some more significant snow for the western Alps on Friday. Watch this space…

Updated: 9am Friday 3 January 2020 - Temporary change in the weather in the Alps…

It’s another fine day across most of the Alps, though there is some high cloud in the north which will thicken to bring a few showers close to the northern foothills of the Alps this evening (flurries 1200-1500m). 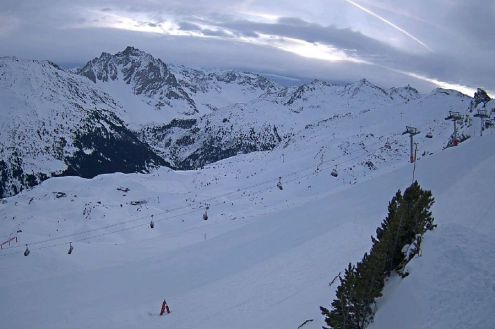 Some high cloud above Méribel today, but it will remain dry and fairly bright – 3 January 2020 –Photo: merinet.com

Some snow will fall overnight and tomorrow across the northern Alps, particularly in the north-east (i.e. Austria) with 10-30cm possible in the eastern Austrian Alps (e.g. Salzburgland). The further west you are in the northern Alps the less snow there will be.

The western Austrian Alps (e.g. Lech) and northern Swiss Alps (e.g. Engelberg) will only see a few centimetres at best, while the northern French Alps (e.g. Avoriaz) will see virtually nothing. The southern Alps (e.g. Italy) will stay mostly dry and bright. Any snow will initially fall above 1200-1500m but will lower to below 1000m during the course of Saturday.

Aside from a few very weak disturbances in the northern and eastern Alps, next week will again be mostly fine and mild with lots of sunshine at altitude.

Snow conditions remain good across most of the Alps for early January with just a few weaknesses at very low altitude across the north (e.g. Morzine, the Jungfrau region and Austrian resorts close to the German border). However, even in these areas there is still plenty of good piste skiing at altitude.

Updated: 2pm Thursday 2 January 2020 - Still glorious weather in the Alps, with snow forecast for the eastern Alps on Saturday…

It has been another glorious day across the Alps with wall-to-wall sunshine at altitude and just some nuisance value areas of fog/cloud in some of the lower valleys, especially close to the northern foothills. 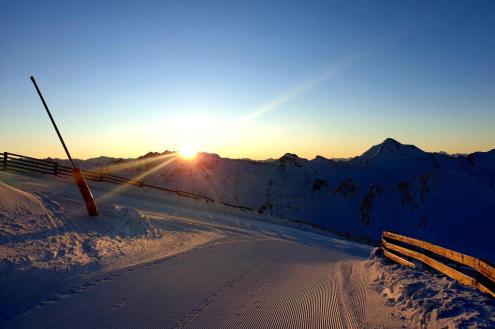 Temperatures have also been very mild at altitude again but, due to a temperature inversion, it has often been colder in the valley bottoms. Thanks to the low humidity, snow conditions have remained very good.

The weather will remain mostly fine tomorrow, but cloud cover will increase in the northern Alps later in the day. On Friday night/Saturday a cold front will bring some snow to the northern Alps, especially the north-east, with 20-40cm possible in Salzburgland, parts of Styria and Upper and Lower Austria.

The further west you go the less significant the snow will be, with a few centimetres in western Austria (e.g. Lech) and eastern Switzerland (e.g. Klosters) but very little in the western Swiss (e.g. Verbier) and northern French (e.g Avoriaz) Alps. The southern half of the Alps will also remain dry. The rain/snow limit will start around 1300-1600m before descending towards or below 1000m on Saturday.

Sunday and Monday will see the weather improve again with lots of dry, sunny and relatively mild weather.