After a glorious day for many parts of the Alps today, the weather will turn tomorrow with the arrival of a new storm from the west. This will be followed by another, more potent storm on Friday.

Wednesday’s storm won’t be particularly active, bringing around 5-15cm of snow to the French and Swiss Alps, as well as some western Italian resorts, but there will be generally less snow further east. The rain/snow limit will start at around 1200-1500m, descending to under 1000m later on.

The storm due in the early hours of Friday is more complicated, and will bring a lot of precipitation to the western Alps, slowly pushing a bit further east, but it is more difficult to predict the rain/snow limit. It will no doubt start quite low and will probably remain very low in the more internal valleys (e.g. in the Swiss Valais) but, during the course of the day, it could rise to between 900m and 1200m for a time.

Between Thursday night and Saturday morning we could see 50-80cm of new snow above 2000m in parts of the French, western Swiss and western Italian Alps (in resorts such as Val d’Isère, Val Thorens, Verbier and La Thuile).

Most other parts of the Alps will also see at least some snow, but generally in much more modest quantities, with most of Austria (away from the far west) and the eastern Italian Alps (e.g. Dolomites) only seeing a few centimetres at best.

Wednesday will be dry in the Austrian Alps, with plenty of sunshine, though cloud will spread into the west (e.g. St Anton) later in the day.

Thursday will see some showers (snow 600m) at first, lingering into the afternoon in the east. Most places will become dry though, with some long sunny spells in the west.

Friday will be mostly cloudy with showers or longer spells of rain/snow (600-1000m) heaviest in the west (e.g. Lech, St Anton).

Saturday will remain rather cloudy with further showers (snow 600-900m) for many. The south (e.g. Bad Kleinkirchheim) will be drier, though, with the chance of some sunny spells. 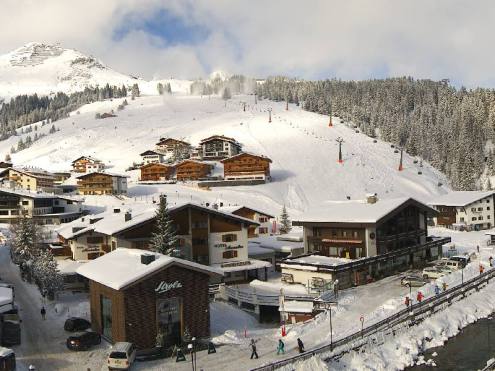 Sunny today in Lech but more snow is expected over the next few days – 10 December 2019 – Photo: lech.com

Wednesday should start dry with some sunshine in the French Alps. However, cloud will thicken from the west to bring some rain/snow (800-1000m) later in the day. The far southern French Alps (e.g. Isola 2000) should stay mostly dry.

Thursday will be mostly dry with sunny spells, but cloud will again thicken from the west later in the day with rain/snow arriving in the evening. The rain/snow limit will be low in the more internal valleys (400-600m) and higher in the western foothills.

Friday will be stormy with lots of snow and strong winds in the mountains. The rain/snow limit will be quite low in the internal valleys (e.g. Bourg St Maurice) but will creep over 1000m in the more exposed western mountains (e.g. around Grenoble).

Saturday will see further showers, especially across the northern Alps (e.g. 3 Valleys, Grand Massif) with a rain/snow limit close to or a little above 1000m. 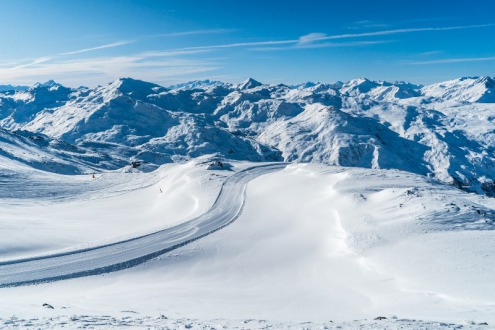 Fine weather today in Les Menuires, but more snow is on its way, heaviest on Friday – Photo: facebook.com/LesMenuires, 10 December 2019

Wednesday will start dry with sunny spells in Italy, especially in the east. Later in the day it will turn cloudier from the west with some showers (snow 800-1200m) moving east later.

Thursday may see a few early showers or flurries in the east, otherwise most places will be dry with sunny spells, although cloud will thicken in the west again later with snow to low levels in the far north-west by evening.

Friday will be mostly cloudy with showers or longer spells of rain/snow (500-1000m), heaviest in the far north-west (e.g. La Thuile, Courmayeur) and patchier in the east (e.g. Dolomites).

Saturday will see further showers (snow 800m) in the far north west, otherwise most areas will be dry with sunny spells.

Wednesday will start dry with sunny spells in the Swiss Alps, especially in the east (e.g. Klosters). Rain/snow (600-900m) will reach the western Alps (e.g. Portes du Soleil) later in the day, reaching the east by evening but dying out as it does. The far southern Alps (e.g. Bosco Gurin) may stay mostly dry.

Thursday may see a few early flurries across the northern Alps (e.g. Engelberg). Most regions will then be dry for a while before the next storm arrives in the west late in the day, spreading east overnight (snow 600-1000m).

Friday will be stormy with significant snow for most regions (500-1000m), heaviest in the west (e.g. Verbier, Portes du Soleil). Some southern regions, especially Ticino, may escape with a mostly dry day.

Sunday will be mostly fine and a bit milder than earlier in the week. It will then turn even milder early next week, with plenty of sunshine across the northern and eastern Alps (e.g. Salzburgland). The south-western Alps (e.g. Sestriere) may see more in the way of cloud, however, with some showers (snow 1200-1700m).

Our next detailed snow forecast will be on Friday 13 December 2019, but see Today in the Alps for daily updates