Welcome to our first weather & snow forecast of the 2021-22 ski season!

After a dry, mostly sunny and very mild day today, the weather in the Alps will turn more unsettled over the weekend with some snow in places, especially on Sunday.

Before anyone gets too excited, we should emphasise that not everywhere will see a huge amount of snow over the next few days. A first (cold) front will move down from the north-west late on Saturday, clearing the Alps early on Sunday. This will deliver no more than a dusting of fresh snow to the north-western Alps (e.g. Portes du Soleil) but will become a bit more potent as it heads south-east, with between 5cm and 25cm of snow expected at altitude in the Austrian Alps, eastern Swiss and eastern Italian Alps.

This cold front will then interact with and temporarily re-energise a storm currently forming in the western Mediterranean, meaning that on Sunday and Monday there may be a heavier spell of snow for a time in the southern Alps, especially in the Italian Piedmont (e.g. Sestriere, Prato Nevoso) and adjacent border areas of France from about Val d’Isère southwards (e.g. Val Cenis, Montgenèvre, Isola 2000). These areas could see 25cm to 70cm of new snow above 2000m by late Monday...

Sunday will see further showers or longer spells of rain or snow (1500-1700m) in the southern Austrian Alps. Further north it will be drier with sunny spells, and just the odd shower or flurry (1500m).

Monday will be mostly dry with some sunny spells and freezing levels close to or a little above 2000m. 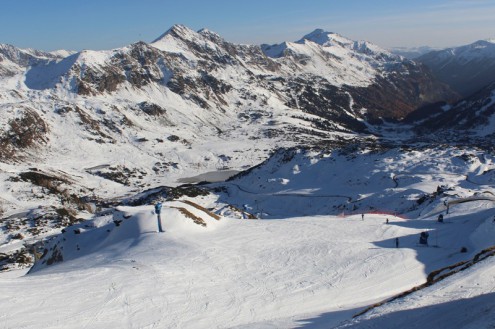 Something of a base in Obertauern, which is due to open on 25 November, thanks to a mix of natural and man-made snow. A further few centimetres are expected here later this weekend – Photo: obertauern.at, 12 November 2021

Saturday will be mostly dry in the French Alps, with sunny spells, although cloud will increase from the north-west, bringing some light rain/snow (1500-1800m) to some northern parts of the Alps (mostly the Haute-Savoie) later and overnight. The more interior valleys of the northern French Alps (Tarentaise) and the southern French Alps should stay dry.

Sunday will be mostly dry, if rather cloudy, in many northern and some southern parts of the Alps away from the Italian border. However, rain/snow (1500-1700m) will develop close to the border from about Val d’Isère southwards (e.g. Val Cenis, Montgenèvre, Queyras, Isola 2000), heaviest later in the day.

Monday will see similar weather, with further moderate or even heavy snow (1400-1700m) close to the Italian border, heaviest further south. For many parts of the Alps it will be dry though, with plenty of cloud and just a few brighter spells.

Between Saturday and Monday evening we can expect 30-60cm of fresh snow close to the Italian border, from about (and including) Val d’Isère southwards. Elsewhere in the French Alps there will be much more modest snowfall totals, if any at all. 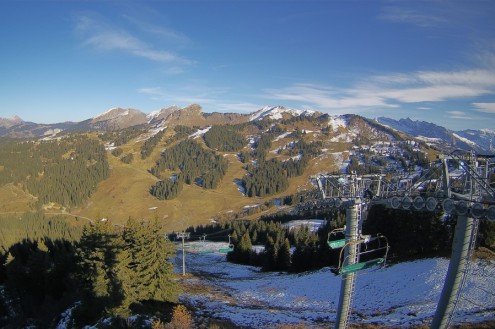 Most of last week’s snow has now melted in Les Gets, with very little new snow expected this weekend – 12 November 2021 – Photo: lesgets.com

Saturday will be mostly dry and mild in the Italian Alps, though some showers will break out in places on Saturday night, chiefly close to the border regions and heaviest in the central-eastern Italian Alps (e.g. Livigno, Passo Tonale). The rain/snow limit will be around 1500-1800m.

Sunday will be mostly cloudy with showers or longer spells of rain/snow (1300-1700m), at first heaviest in the eastern Italian Alps, then later in the day and on Sunday night in the Piedmont (Alagna, Sestriere, Prato Nevoso) and the north-eastern Aosta (Cervinia).

Monday will remain mostly cloudy, with further snow for the Piedmont and north-eastern Aosta. There could also be a few light flurries elsewhere in Italy, although any precipitation will be less significant.

Between Saturday and Monday evening we could see between 40cm and 70cm of new snow at altitude in the Piedmont and north-eastern Aosta, with 5-25cm more generally across the Italian Alps. 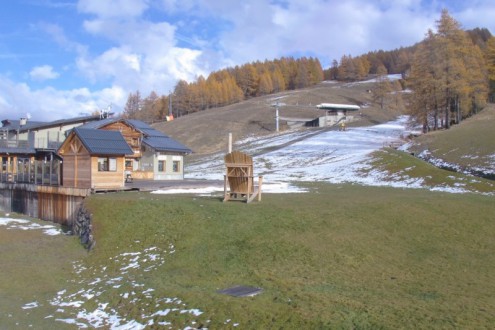 The snow is melting in Bardonecchia today, but it should see a significant fall later this weekend – 12 November 2021 – Photo: bardonecchia.it

Saturday will start dry with sunny spells in the Swiss Alps, although cloud cover will increase later in the day and overnight from the north-west, with showers (snow 1400-1800m), heaviest in the eastern Swiss Alps.

Sunday will see further snow (1300-1700m) across the southern Swiss Alps, especially along the Italian border between Zermatt and the Italian lakes. Elsewhere, there will be some showers or flurries in the morning, largely dying out to leave the best of any sunshine in the north-western Swiss Alps (Vaud, Bernese Oberland).

Monday will see similar weather, with some further showers (snow 1400-1800m) in the south, especially close to the Italian border. Elsewhere in the Swiss Alps there will be few if any showers/flurries, and a better chance of seeing some sunny spells.

Between Saturday and Monday evening we could see between 25 and 50cm of new snow in the far southern Swiss Alps, roughly in a triangle between Zermatt, Andermatt and St Moritz, but more generally 5-20cm, and perhaps no more than a dusting in some parts of the north-west (e.g. Villars). 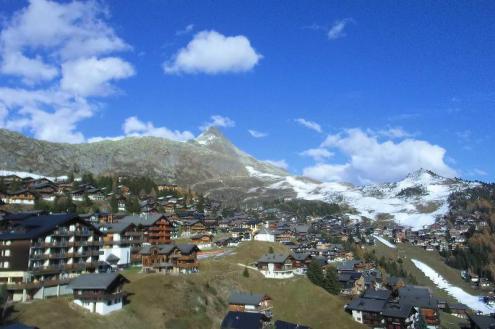 Not much snow left around south-facing Bettmeralp but the slopes will turn white here again by Sunday, albeit temporarily – 12 November 2021 – Photo: bettmeralp.ch

The weather in the Alps looks like being mostly fine on Tuesday and Wednesday, with some low cloud but plenty of sunshine and relatively mild temperatures at altitude.