After a mostly fine week in the Alps, the weather is turning more unsettled again and will remain highly changeable all next week.

The first major storm will hit the Alps on Sunday night/Monday, bringing 30-60cm (and even more in places) to the north-western Alps – including the northern French Alps (e.g. Val d’Isère/Tignes, 3 Valleys, Flaine, Chamonix, Avoriaz), the Swiss Alps away from the far south (e.g. Verbier, Mürren, Engelberg) and the northern and western Austrian Alps (e.g. Lech, St Anton).

The rain/snow limit still start at around 1600-2000m on Sunday night, but will quickly fall to between 600m and 900m during the course of Monday.

There will also be some snow for many other parts of the French, Swiss and Austrian Alps (away from the far south), as well as the north-western Italian Alps (e.g. Courmayeur, La Thuile, Cervinia). 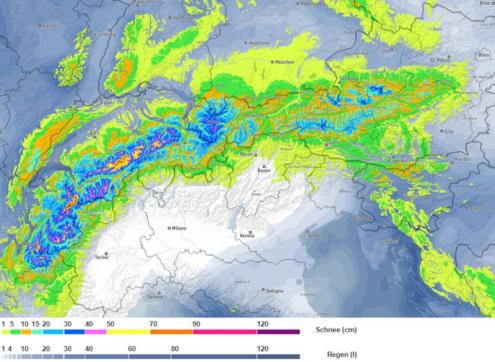 Expected snowfall totals in the Alps between now and Monday, showing the heaviest falls (purple) across the north-western Alps – Image: bergfex.at, 6 December 2019

Saturday will see variable weather conditions in the Austrian Alps, with a few showers (snow 1400m) in the far north and west (e.g. St Anton, Kaprun). Elsewhere it will be mostly dry with sunny spells.

Sunday will be dry with sunny spells and relatively mild temperatures.

Monday will be cloudier with showers or longer spells of rain/snow, heaviest in the north-west (e.g. Arlberg region) with a rain/snow limit descending to 700-900m.

Saturday will see a few light showers (snow 1600m) in the far northern French Alps at first, otherwise most places will be dry with some sunny spells, the best of these the further south you are.

Sunday will start dry with sunny spells, but cloud will thicken up from the north and west as the day goes on, with rain/snow (1800-2000m) arriving in the northern French Alps later.

On Monday, the far southern Alps (e.g. Isola 2000) will stay dry, while most other parts of the French Alps will see showers or longer spells of rain/snow, heaviest in the north (e.g. Flaine, Avoriaz) with a rain/snow limit descending to 800m or so.

Saturday will be mostly dry in Italy, with sunny spells and relatively mild temperatures.

Sunday will again be mostly dry with sunny spells, but cloud will increase in the west later with a few showers possible (snow 1900m) in the far north-west (e.g Courmayeur) by evening.

Monday will see plenty of snow showers in the north-west (e.g. La Thuile, Courmayeur, Cervinia), but fewer showers and more in the way of sunshine in both the southern Piedmont (e.g. Prato Nevoso) and the Dolomites (e.g. Cortina). 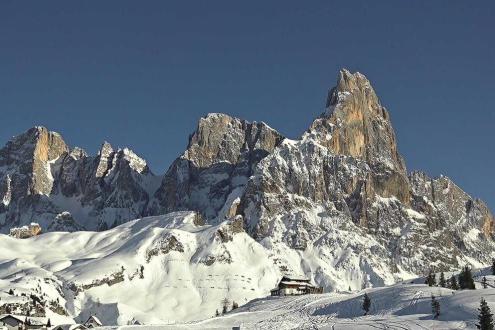 Another beautiful day today in the Dolomites. This is San Martino di Castrozza – 6 December 2019 - Photo: superdolomiti.com

Saturday will see a few showers across the northern Swiss Alps (e.g. Jungfrau, Engelberg), with a dusting of snow above 1400-1600m, tending to die away later in the day. Most of the Swiss Alps will stay dry with bright or sunny spells, the best of these being in the far south (Ticino).

Sunday will start dry with sunny spells in most regions, however, cloud will increase from the north-west as the day goes on, with rain/snow (1800m) reaching the northern-western Swiss Alps later (e.g. Villars, Jungfrau region).

Monday will be mostly cloudy with frequent showers or longer spells of snow, heaviest in the northern and western Swiss Alps (e.g. Villars, Gstaad, Jungfrau region, Engelberg). The rain/snow limit will descend to between 600m and 800m. However, the far south (especially Ticino) could remain mostly dry with a few sunny spells.

Except for some residual snow showers across Austria (especially in the east), Tuesday will be a drier day with sunny spells for most.

A new storm is then set to bring snow to many parts of the Alps on Wednesday.

Our next detailed snow forecast will be on Tuesday 10 December 2019, but see Today in the Alps for daily updates