The weather in the Alps remains extremely unsettled but will lurch from exceptionally mild to “full-on winter” within just 24 hours from now.

Over the last couple of days, the Alps have been plagued by very mild (and in places rainy) weather, generated by a warm front which dragged tropical air right across western Europe. Thanks to the arrival of an active cold front that will move down from the north west early on Tuesday, the moist tropical air will be replaced by much colder unstable Polar air.

So, while much of the Austrian Alps (away from the south) and parts of eastern Switzerland will still have to put up with rain to 2000m or so this afternoon, this will turn increasingly to snow tonight and tomorrow. Indeed, significant snow is expected right across the northern Alps tomorrow with a rain/snow limit falling to between 400m and 600m by the end of the day.

Areas set to benefit in the northern Alps include the French Alps roughly north of Grenoble, most of the Swiss Alps (but excluding parts of the south, like Ticino) and much of the Austrian Alps (but with the notable exception of Carinthia and Osttirol). By Wednesday morning we can quite widely expect 20-60cm of new snow above 1500m, with a few centimetres to as low as 500m in places. 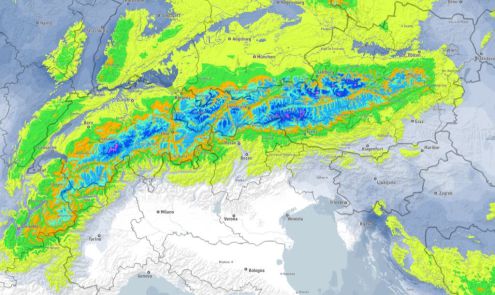 Predicted snowfall totals in the Alps this week showing most of the snow across the northern half of the Alps – Image: bergfex.com, 3 February 2020

The rest of Monday will be mostly cloudy in the Austrian Alps, with just a few bright spells in the far south. Most areas will see showers or longer spells of precipitation, with a rain/snow limit between 1700m and 2000m.

Tuesday will see big drop in temperature, with lots of wind and significant snowfall in many places, heaviest in the Vorarlberg, Tirol and Salzurgland. The far south (Osttirol, Carinthia) will see fewer showers, and maybe even some bright spells.

Wednesday will be cold, with further snow showers to very low levels across the northern half of the Austrian Alps. The far south will be dry and mostly sunny.

Thursday will see a return to fine weather, but it will remain chilly.

The rest of Monday will be rather cloudy but mostly dry in the French Alps, except for a few showers (snow 2300m) across the north. The far southern Alps will see some sunshine.

Tuesday will be much colder and very windy with spells of snow to increasingly low levels (500-700m by the end of the day). The heaviest snow will fall in the northern French Alps (north of Grenoble), with some southern Alpine areas remaining dry.

Wednesday will see a return to brighter weather, but it will be cold and windy.

Thursday will also be fine, but a little less cold. 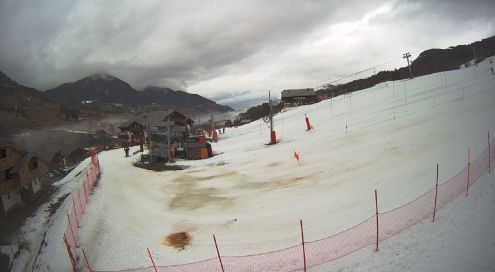 The rest of Monday will be mostly dry and still very mild in the Italian Alps, with variable cloud amounts but some good sunny spells in places.

Tuesday will be much colder and very windy with some flurries to low levels close to the border regions. Away from the borders many places will be dry though, with some sunny spells.

Wednesday will be cold and windy, but dry with plenty of sunshine.

It will remain sunny on Thursday, with temperatures starting to rise.

The rest of Monday will be mostly cloudy with further showers or longer spells of rain/snow (2000m) across the eastern Swiss Alps. Any showers will die away further west, and there may even be some sunshine across the far south.

Tuesday will be much colder and very windy, with frequent snow showers to increasingly low levels (400-600m by the end of the day). The snow will be virtually continuous across the northern half of the Swiss Alps, but more scattered further south where some places (e.g. Ticino) may even stay mostly dry.

Wednesday will be cold and windy with further flurries for a time across the north and east of Switzerland, dying out from the west as the day progresses.

Thursday will see a return to fine weather across the board, but it will still be on the chilly side.

Friday and Saturday will remain mostly dry with sunny spells and increasingly mild temperatures. A return to very unsettled conditions with significant snow in places is then likely next week.

Our next detailed snow forecast will be on Friday 7 February 2020, but see Today in the Alps for daily updates