As we approach the middle of November more and more resorts are opening across the Alps, albeit only partially and, in many cases, just at weekends.

Broadly speaking, snow cover in the Alps is not far off average for early to mid-November, though there are, of course, significant differences from one region to the next. Last week’s storms – the biggest of the Autumn so far – brought 30-70cm at altitude to a wide swathe of the Alps, with some snow even falling to below 1000m in places for a time, though it did not last long. Indeed, the last few days have seen the weather turning very mild, sending the snowline scurrying back up the mountain, especially on the northern side of the Alps where the Foehn has also been blowing.

As you would therefore expect, this snow has come too early to lay a natural base in most resorts, even at altitude, although there are some exceptions. Obergurgl, for example, will soon be open and has plenty of natural snow.

Parts of the Dolomites also have impressive natural snow cover for the time of year. However, most non-glacial resorts that have opened will have needed artificial help to do so, as will any that hope to open in the near future...

All eight Austrian glacier areas (Hintertux, Stubai, Kaunertal, Pitztal, Sölden, Mölltal, Kaprun and Dachstein) are open and in good shape. Some, such as Hintertux (135cm upper base) and Sölden (105cm upper base) have also opened some non-glacial terrain thanks to significant snowfalls in recent weeks.

Austria’s next big opening is entirely non-glacial Obergurgl (80cm upper base), which is due to have a special pre-opening weekend on its Hochgurgl sector on 13-14 November before the resort opens properly on 18 November. The resort already has good natural snow cover with excellent artificial back-up having assured a solid early season base.

Another non-glacial area that is looking good is Ischgl (40cm upper base), where skiing will commence on 25 November.

Snow cover in Austria is generally about average for early to mid-November, with a reasonable amount of snow above 2000m or so, particularly in the south, but with cover remaining thin, patchy or even non-existent lower down, especially on slopes exposed to the sun.

Not much snow is forecast for Austria in the very short term but there are some indications that a significant wintry blast may be on the cards for later next week. Watch this space… 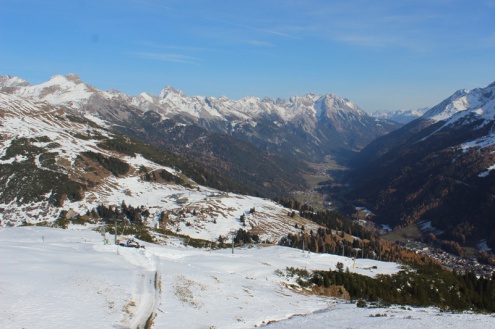 Lift-served skiing in France is currently limited to the Grande Motte glacier above Tignes (70cm upper base), where snow conditions are pretty good for early November.

The next big opening scheduled is Val Thorens on 20 November, followed by L’Espace Killy (Val d’Isère/Tignes), Les 2 Alpes, Puy St Vincent and possibly one or two others on 27 November. Snow depths remain very modest below glacier level and, if there is no significant dump between now and then, these resorts will be heavily reliant on artificial snow. This is not unusual though, and the likes of Val Thorens have had some very successful “openings” on a mix of natural and artificial snow.

As for the weather forecast, some snow is expected over the weekend but the details remain uncertain, though it looks as if Val d’Isère may do best out of the resorts mentioned above.

A more significant wintry blast is possible in about 10 days’ time, but this is obviously a long way off so will need monitoring… 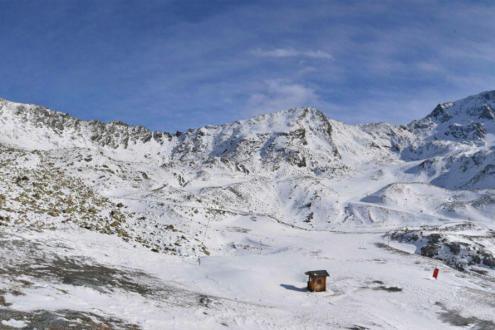 Natural snow cover is still on the thin side in Val Thorens – 11 November 2021 – Photo: val thorens.com

Five resorts are currently open in Italy including Cervinia (115cm upper base), Sulden am Ortler, Val Senales, Passo Tonale and Cortina d’Ampezzo. Snow conditions are good in all these resorts, though Cervinia is offering the greatest extent and variety of terrain with the link over into Zermatt now open and skiing possible right down to the mid-station at Plan Maison.

As for how the Italian Alps are shaping up more generally, natural snow cover is quite good for November, especially higher up. This, combined with the Italians’ world class snowmaking (especially in the Dolomites) gives room for optimism about early season snow conditions. 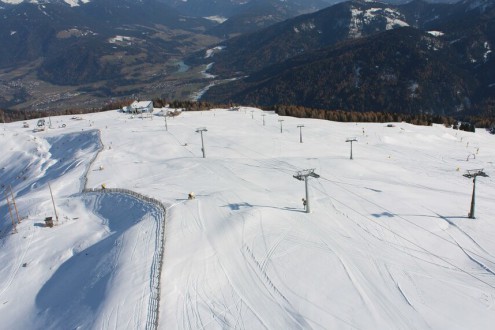 Lots of ski resorts in Switzerland are now open, or soon will be, even if in many cases it is only at weekends. Weather-permitting, Zermatt (150cm upper base) and Saas-Fee (160cm upper base) are open daily and remain the best bets for the greatest variety and extent of open terrain.

Many non-glacial options are also available at weekends, however, including Mürren, Davos-Klosters and Arosa. Verbier will also open this weekend for the first time this season.

Natural snow cover is pretty much what you would expect for early to mid-November – reasonable at high altitude, especially in the south-east (e.g. St Moritz) but thin, patchy or non-existent lower down, where artificial help is needed on many non-glacial runs.

As for the weather forecast, some snow is possible in Switzerland over the weekend, especially in the far south-west (e.g. Zermatt), but all eyes are on the end of next week for the next major wintry blast. Watch this space… 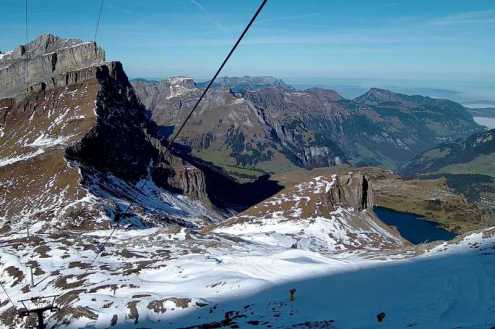 The Foehn has accelerated the thaw on the northern side of the Alps, as here in Engelberg (pictured) – 11 November 2021 – Photo: titlis.ch

Outside of the Alps there is still very little lift-served skiing available in Europe, with just a handful of partial openings in Scandinavia such as Finland’s Levi (15cm upper base), currently reliant on artificial help.

Half a dozen or so resorts are already open in the US, the most significant being Mammoth (100cm upper base) where big early season snowfalls have allowed 34 runs to open, with skiing from top to bottom.

Lake Louise (30cm upper) is the only major resort open in Canada, offering three runs on a mixture of natural and artificial snow.