Up until Christmas, snow conditions were excellent across just about all the Alps. Over the last few days however, some exceptionally mild air has complicated the situation, particularly across the north-western Alps which have also seen a lot of rain.

Yesterday the rain fell to as high as 2700m across some exposed parts of the northern French and western Swiss Alps, pretty much as high as the rain/snow limit would ever get in the middle of winter.

It did keep snowing for longer than expected in the more internal valleys of the western Alps, such as Val d’Isère and Zermatt, however. Indeed, Le Fornet (near Val d’Isère) saw around 90cm of new snow between Tuesday and Thursday, although the mild air eventually won out here too, with the rain/snow limit rising to well above resort level yesterday.

The further east and south you are, the less damaging this warm spell has been. Over the last 24 hours, some rain did also reach the Austrian Alps (away from the far south), especially the Arlberg, but not in the same quantities seen in the French or western Swiss Alps. As for the southern Alps, with the exception of the far north-west of Italy (e.g. Courmayeur) many areas have seen little if any precipitation in recent days.

In short, right now there is a lot of fresh snow at high altitude in the north-western Alps, but below 2500m or so the snowpack is wet. More consistent snow conditions can be found further south-east (e.g. Dolomites), where they managed to avoid the recent rain.

Across the pond, all eyes are on the western US where a serious of massive snowstorms have led to record early season snow depths across parts of California…

In the Austrian Alps, the areas most affected by the recent “warm storm” have been the north and the west, particularly the latter. Heavy snow has fallen at altitude though there has also been plenty of rain lower down, especially in the Arlberg where the rain/snow limit reached well over 2000m yesterday. This means that the snowpack is now humid in all but the highest parts of St Anton (70/115cm) and Lech-Zürs (70/115cm) even if snow depths remain relatively healthy.

Further east, it has also rained in low-lying Söll (70/100cm) where piste conditions were a bit sticky today.

Over the next few days, it will remain very mild in Austria but turn sunnier. This will lead to more spring-like conditions, with overnight refreezes followed by a softening up of the snow by day, especially on low south-facing slopes where some slush can be expected.

By contrast, the southern Austrian resorts that have missed the rain, such as Nassfeld (55/110cm), are offering more consistent snow conditions right now. 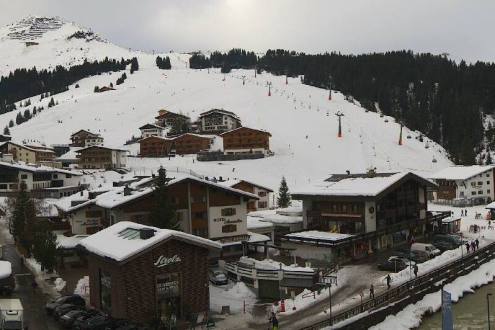 Snow conditions are very mixed across the resorts of the French Alps. The northern French Alps have seen a lot of snow, especially at altitude, but also a lot of rain, falling up to 2700m in places yesterday.

This means that while there is still plenty of snow in the lower resorts such as Les Gets (35/130cm) and La Clusaz (60/190cm), snow depths have taken a hit and the snowpack is currently humid. Anyone looking for dry powdery snow over the next few days will have to head very high, to perhaps the Grande Motte glacier above Tignes (120/160cm) or to the glacier above Les 2 Alpes (100/150cm).

Over the next few days, temperatures are set to remain exceptionally mild, but it will also be quite sunny. The clearer skies mean that there will be a refreeze overnight but, with temperatures expected to reach 12-15°C at 1500m tomorrow and Saturday, expect the snow to soften up lower down as the day progresses.

There will probably even be some spring-style slush on low south-facing slopes – not really what you would expect in late December! 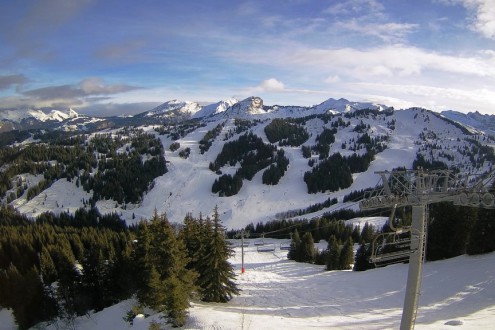 Most Italian resorts have seen little if any precipitation over the last few days but, given the mild temperatures, this has actually been quite good news for the average piste-skier, with snow conditions being more consistent in the likes of Livigno (45/65cm) and Arabba (30/160cm) than in resorts on the north-western side of the Alps which have been more affected by the recent storm.

The north-western Italian resorts of Courmayeur (70/100cm) and La Thuile (20/150cm) saw some heavy snow over the last couple of days, turning to rain lower down, but thanks to the cooler air hanging on for longer, a greater proportion of the precipitation fell as snow than on the north-western side of the Alps where resorts were more exposed to the warm, humid air masses.

It will be mostly sunny and exceptionally mild over the next few days, with a spring-like freeze-thaw pattern setting up, especially on lower slopes exposed to the sun. 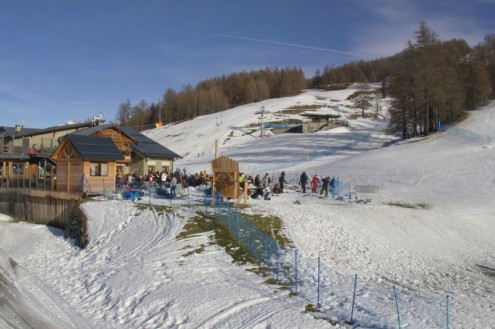 Signs of a slight thaw low down in Bardonecchia – 30 December 2021 – Photo: bardonecchia.it

Most of the Swiss Alps have seen a lot of snow over the last few days, especially at altitude. However, many areas have also seen a lot of rain, especially in the north and west where the rain-snow limit reached as high as 2600m in places yesterday.

Snow conditions in the Swiss Alps are therefore extremely mixed, with lots of powder at very high altitude, such as on the glaciers above Zermatt (15/110cm) and Saas-Fee (20/135cm). However, lower down the snowpack has taken quite a hit and is more humid.

There is still plenty of snow in the likes of Villars (50/120cm) and Wengen (20/65cm) but conditions will feel more spring-like over the next few days. Indeed, with largely clear skies, there will be something of a freeze-thaw cycle setting up, with some slush to be expected on lower south-facing slopes. 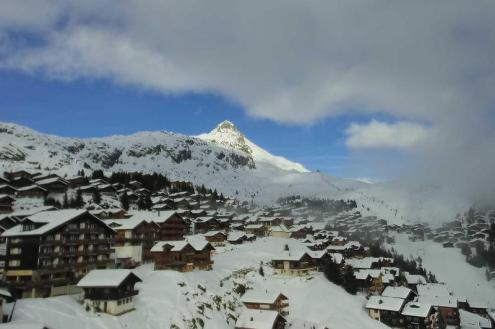 Plenty of snow in Bettmeralp in the Swiss Valais but the consistency at resort level is wet – 30 December 2021 – Photo: bettmeralp.ch

Snow depths remain impressive in the Pyrenees despite much milder conditions in recent days. Plenty of warm sunshine can be expected over the next few days in both Spain’s Baqueira Beret (160/225cm) and Andorra’s Soldeu (75/150cm).

Scandinavian resorts haven’t seen much new snow recently but, with very cold temperatures for much of December (even if it has turned milder now), on-piste conditions are holding up fine in Norways’s Hemsedal (40cm upper base) and Sweden’s Åre (60cm upper base).

Fluctuating temperatures and wild weather have left snow conditions in Scotland less than ideal right now, with only limited skiing available in Cairngorm, Glenshee and the Lecht. 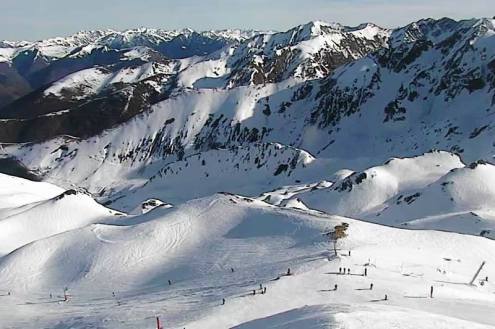 Plenty of snow in the French Pyrenean resort of Peyragudes, despite the warm weather – 30 December 2021 – Photo: snoweyes.com

Californian ski resorts have seen massive quantities of snow since we last reported, with several metres at altitude meaning that upper mountain settled snow depths in Mammoth are now a very impressive 450cm.

Most other western US resorts have also seen new snow in recent days, with more forecast in both Vail (40/105cm) and Jackson Hole (105/165cm). 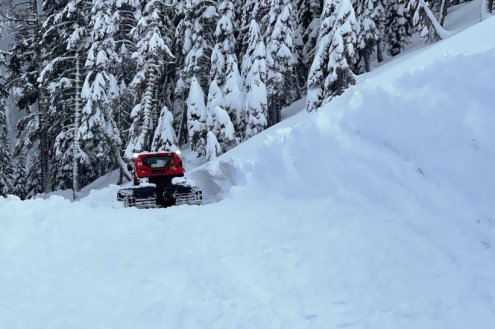 California has seen huge snowfalls in California in recent days. This is Pallisades at Tahoe – 30 December 2021 – Photo: Geoff Goldstone

Further east, the Banff/Lake Louise area (125/175cm) will only see a little snow over the next few days but is currently in great condition at all altitudes.