The Alps have seen some fresh snow at altitude over the last few days, meaning that most of the glaciers (which can still be threadbare in September) are now in pretty good shape for the time of year. 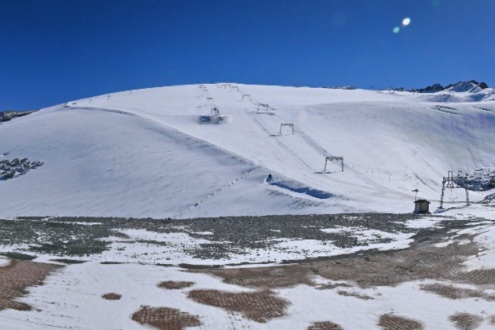 The glacier above Les 2 Alpes is looking in reasonable shape prior to its half term opening on 23 October – Photo: les2alpes.com, 29 September 2021

The alpine glaciers had a wetter and cooler summer than in recent years, seeing abundant snowfall at very high altitudes, above 3500m or so. However, some notable heat waves did cause problems for certain glaciers, especially in France, where Les 2 Alpes was forced to close its summer ski season early despite it having initially got off to an excellent start.

Right now it is possible to ski on eight glaciers across the Alps, including:

France currently has no lift-served skiing available, though the Grande Motte glacier above Tignes is scheduled to open for the season on 16 October, with Les 2 Alpes following on 23 October, just for the half-term holidays, closing again on 7 November.

The first significant snowfall of the autumn has hit the Alps, with up to 30cm of fresh snow at high altitude and a dusting down to or even below 2000m in places. 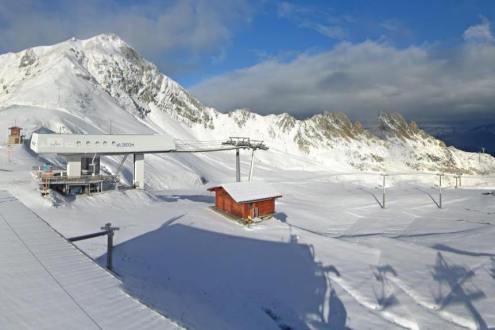 September snowfalls are not uncommon in the Alps, even to relatively low altitudes, but they do not have any bearing as to how snow conditions might pan out further down the line.

The recent snowfall is, however, a timely reminder that winter is not far away and, for anyone lucky enough to be able to ski on the few open glaciers right now, snow quality (in the short term at least) should be excellent.

Right now you can ski on three Austrian glaciers at Hintertux, Pitztal, Sölden and Mölltal. In Switzerland, it is possible to ski on the glaciers above both Zermatt and Saas-Fee, while Italy is currently offering skiing at Passo Stelvio, Val Senales and Cervinia.

Updated: 9.30am Thursday 27 May 2021 - Exceptional snow conditions at altitude in the Alps…

After one of the coldest springs in recent memory, snow conditions in the Alps are now exceptional for late May. 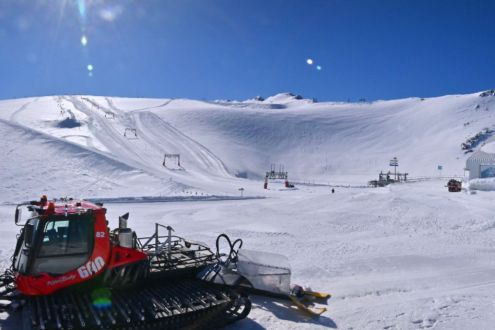 The glacier in Les 2 Alpes is looking in great shape ahead of its early opening this Saturday – Photo: les2alpes.com, 27 May 2021

For those lucky enough to be able to access them, several resorts and glaciers are offering skiing right snow, with more areas due to open soon. The weather in the Alps is warming up, with temperatures set to return to their seasonal average over the next few days, however, with snow depths on the glaciers uniformly (way) above average for the time of year, the start of the summer skiing season is looking as good as it possibly could!

All the Austrian glaciers are in great shape, although the Hintertux glacier currently offers the greatest extent of skiing with around 30km of pistes currently available and base depths of up to 465cm. 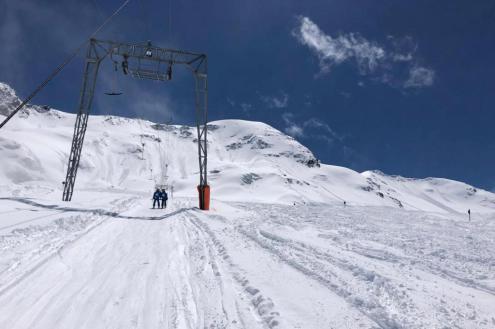 Fresh snow earlier this week on the Kaunertal glacier – Photo: facebook.com/kaunertal.gletscher, 24 May 2021

Les 2 Alpes opens its glacier on Saturday 29 May, in fact offering a bit more than just the glacier, with an expected 1000m vertical of skiing down to 2600m. Next to open is Val d’Isère on 12 June, followed by Tignes on 19 June.

Snow cover in all these resorts is exceptional for late May, indeed ski tourers can comfortably ski back to resort level in Tignes right now. 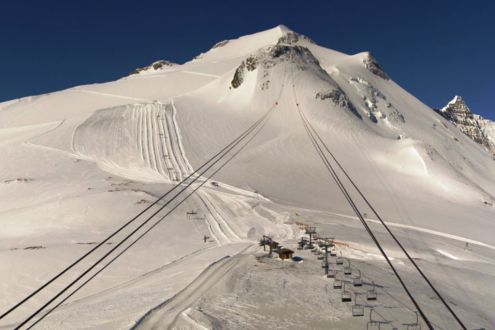 Preparation is underway on the Grande Motte Glacier for the 19 June opening of Tignes’ summer ski season – Photo: tignes.net, 27 May 2021

Cervinia opened some non-glacial runs on Tuesday (25 May) and plans to keep the three chairs above Plan Maison (2500m) running until the official beginning of its summer ski season on 12 June, when its ski operation will revert to the glacier. The glacier at Passo Stelvio will begin its summer skiing operation this Saturday (29 May). Snow conditions in both resorts are exceptional right now. 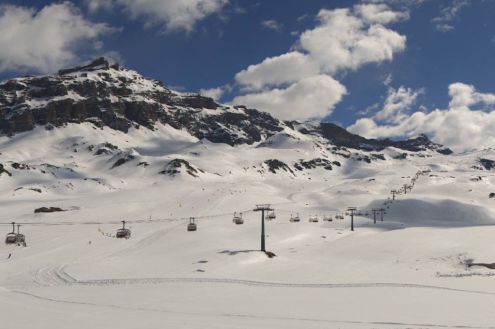 Unusually good snow cover in Cervinia for late May – Photo: cervinia.it, 27 May 2021

Snow conditions in Switzerland are exceptional for late May, with two resorts currently open. Zermatt (open all year round) is the best bet right now, with around 20km of slopes open on the glacier, while Crans Montana (closing date TBC) is offering a limited downhill operation up on its Plaine Morte glacier.

Over the last few days, yet more snow has fallen across many parts of the Alps, even to as low as 1300-1500m in some north-western areas such as the Portes du Soleil. This is consistent with the general pattern that we have seen in the Alps this spring, with colder than average temperatures and frequent snowfalls, sometimes to quite low altitudes. 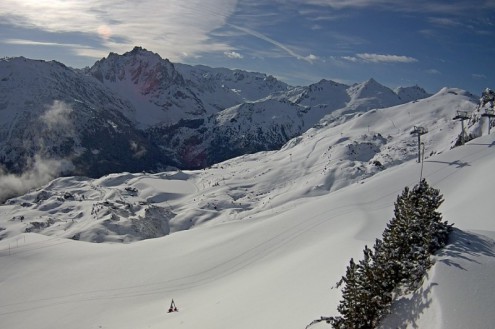 Unusual amounts of snow for late May above Méribel – 18 May 2021 – Photo: meribel.com

The unusually wintry spring is great news for the summer ski season, with the Alpine glaciers now pretty much guaranteed to be in excellent condition, at least for the first half of the season.

There is currently no lift-served skiing in France, although Les 2 Alpes has confirmed that it will be opening its summer skiing area on 29 May, much earlier than usual. Next up will be Val d’Isère on 12 June, followed by Tignes on 19 June.

In Switzerland, you can currently ski in Zermatt (open all year), Engelberg (closing 24 May) and Crans Montana (at weekends only, with its closing date TBC). Saas-Fee will offer summer skiing from 17 July.

There is currently no lift-served skiing in Italy, although Cervinia hopes to open on 12 June and the glacier at Passo Stelvio a little earlier on 29 May.

After one of the coldest and snowiest Aprils in the Alps for many years, the weather during the first half of May has remained unsettled. Indeed, another major storm is currently in progress with the largest snowfalls being at altitude in the western and southern Alps. 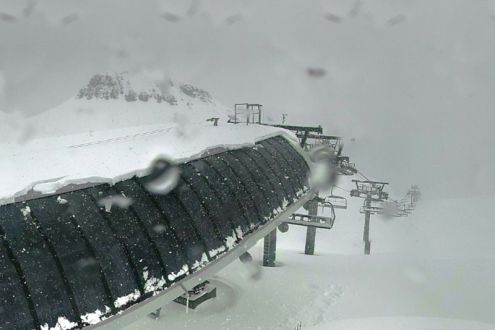 This is especially good news for Les 2 Alpes which has seen at least 60-80cm of new snow at altitude in the last 36 hours. The resort hopes to open for summer skiing on 19 June and the glacier should be in great shape, at least for the first half of the summer season, assuming there is no dramatic and sustained heatwave between now and then.

Elsewhere in France, the Grande Motte glacier above Tignes (which also hopes to open its summer ski season on 19 June) has also seen significant new snow in the last day or two, though not as much as Les 2 Alpes. Other Alpine glaciers have also seen top-ups, and further snow is forecast at altitude right across the Alps in the coming days.

In keeping with what has been an unusually wintry spring, there is yet more snow in the Alpine forecast today and tomorrow. There will then be a dramatic rise in temperature over the weekend, before it turns colder again next week, with the chance of further significant snow in places! 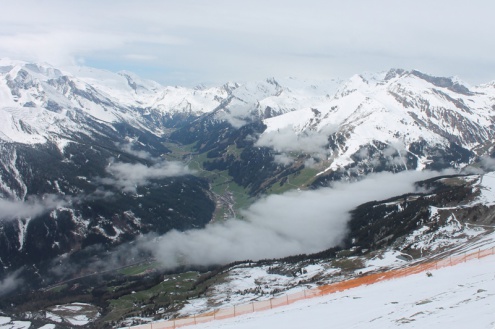 Still plenty of snow at altitude in the Alps, but with wildly yo-yoing temperatures expected over the next few days. This is the Tux valley in the Austrian Tirol – 6 May 2021 – Photo: foto-webcam.eu

The heaviest snow from this new storm will fall across the northern French and western Swiss Alps later today and tonight with 30cm+ in higher parts of the Portes du Soleil, for example, which has unfortunately not seen any skiing all season.

The eastern and southern Alps will see less snow, although there will still be useful top-ups for the handful of areas open for skiing such as Zermatt, Engelberg, Hintertux and Kaprun. The recent cold and (at times) snowy weather is good news for the summer skiing season more generally, as snow-melt in the Alps this spring has been much slower than usual.

Over the weekend, the northerly airflow responsible for the colder than average temperatures in the Alps in recent weeks will switch to the south, with dramatic results. Saturday will be the best skiing day for anyone lucky enough to be able to ski in one of the few areas still open, with plenty of sunshine and some pleasant but not excessively warm temperatures.

However, the southerly wind will strengthen with a strong Foehn on Sunday, sending temperatures to between 25°C and 28°C in some of the lower valleys of the northern Alps (e.g. the Vorarlberg area), meaning that any of the lower-lying snow that falls over the next 36 hours will quickly melt. The weather will cool down again next week though, with significant and widespread snow expected to return to the Alps by Tuesday!