Snow conditions in the Alps are rather poor right now thanks to a combination of factors. The first being that there hasn’t been any widespread significant snow for several weeks now, and snow depths are below where they should be for mid-March across the board – seriously so in the southern Alps. On top of this is the Saharan dust issue - while Saharan sand in the Alps is not unusual, the amount seen this week is at the extreme end of the scale and it is seriously affecting the quality of the snow in places.

Firstly, all the dust/sand in the atmosphere makes it very misty/hazy which prevents a proper overnight refreeze and renders the snow sticky from the word go, at lower altitudes at least. Sand/grit in the snow also accelerates snowmelt, which is hardly ideal given how modest the snowpack is at lower altitudes right now, especially in the southern Alps.

It is possible to find some reasonable piste skiing at high altitude where the snow is firmer, especially on north-facing slopes but, all in all, snow conditions in the Alps are poor right now with no significant fresh snow forecast any time soon.

On a positive note, sunshine should be more prevalent later in the weekend and into the first part of next week - which will produce a more pronounced but predictable freeze-thaw cycle that will allow for some good spring skiing on “corn snow” for those who follow the sun (or a guide)!

It’s better news for resorts across the pond, with fresh snow across much of western Canada and the western US…

Snow cover is generally fine across the Austrian resorts, on-piste at least. However, snow quality has deteriorated in recent days due to the arrival of the Saharan sand, especially lower down where the snow is often sticky.

The weather should become sunnier over the next few days and, although it will feel warmer by day, stronger overnight refreezes should make for better overall snow conditions. 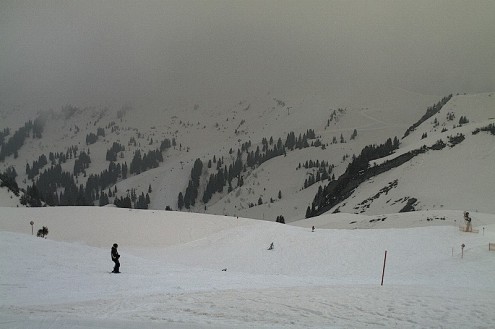 Foggy conditions in the Austrian Vorarlberg. This is Mellau – 18 March 2022 – Photo: mellau.it

Snow cover is very thin in the southern Alps with just 25/50cm of settled snow in Montgenèvre and 25/55cm in Orcières. Further north, snow depths are healthier with 130/180cm in Méribel and 135/255cm in Avoriaz.

Wherever you are in the French Alps though, all the dust and murk from the Saharan sandstorm has led to a deterioration in conditions lower down where the snow is currently a bit sticky.

The weather should brighten up later in the weekend with plenty of sunshine in the forecast early next week. This is good news as it will strengthen the overnight refreeze and allow for better conditions overall. 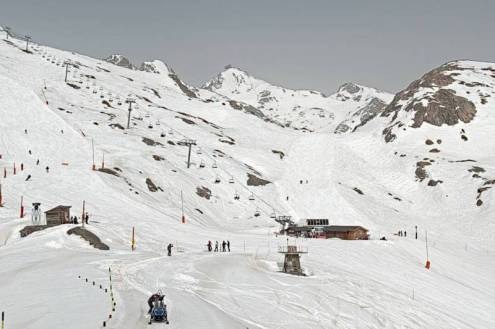 Some hazy sun in Alpe d’Huez today, but there is still a lot of dust in the atmosphere – 18 March 2022 – Photo: alpedhuez.net

Snow depths are way below normal in all Italian resorts right now. Some reasonable piste skiing is still possible at high altitude but lower down the snow is very wet, not helped by the Saharan dust which has weakened any overnight refreezing.

Courmayeur currently has base depths of 50-80cm depending on altitude, while Bormio has 20/75cm. However, better bets for a late season ski holiday in Italy include La Thuile (115/200cm) and Cervinia (77/162cm).

It should become sunnier in the Italian resorts over the next few days which will help with the overnight refreeze and reduce the extent of slush earlier in the day in lower resorts. 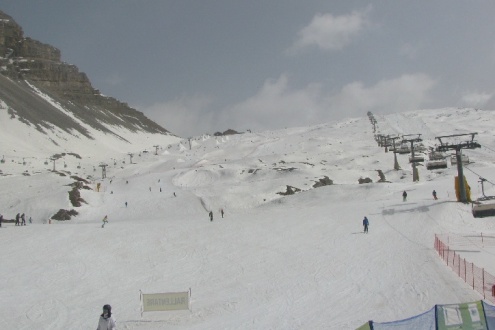 Snow depths are now entirely below normal for the time of year in the Swiss ski resorts, even in the north, where they bagged most of the snow this year.

It is still possible to find some reasonable piste skiing in high ski areas, such as Saas-Fee (55/200cm) and Zermatt (0/140cm), but lower down the snow is often sticky, especially in resorts with plenty of south-facing terrain such as Villars (35/140cm) and Adelboden (17/123cm).

The mist and murk that we have seen in recent days should disperse later this weekend, with plenty of sunshine expected early next week. 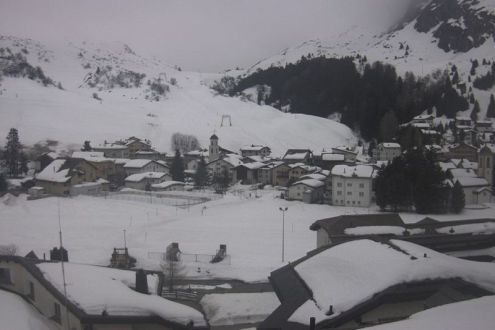 Misty across much of Switzerland right now. This is Bivio in the Engadin – 18 March 2022 – Photo: bivio.ch

The Pyrenees have also been affected by the Saharan sand, meaning that while there is still plenty of snow in the higher resorts, snow quality has been highly variable. Right now, base depths in Spain’s Baqueira Beret are 135/235cm depending on altitude, and 80/120cm in Andorra’s Pas de La Casa.

Fresh snow has improved conditions on the pistes in many Norwegian resorts including Trysil where base depths are 40/78cm.

It’s a more mixed picture in the Scottish resorts, however, with the most complete cover in Glencoe (150cm upper base) while the operation in Glenshee is now limited to a small beginner’s area. 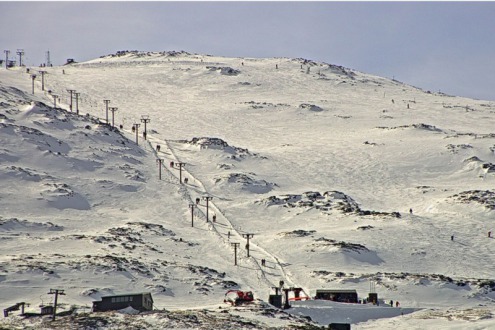 All Colorado resorts have seen fresh snow in recent days, with 40cm in just 48 hours having hugely improved conditions in Winter Park (175cm upper base).

Fresh snow has also improved conditions in recent days in both Utah’s Snowbird (241cm upper base) and Wyoming’s Jackson Hole, where the mid-mountain base is now 210cm deep.

Whistler (268cm upper base) is enjoying excellent snow conditions right now with 44cm of new snow in the last week and plenty more forecast both tonight and tomorrow.

Further inland, Fernie (321cm upper base) has seen a similar amount of fresh snow in the last week (46cm) and is in excellent condition, though it will remain mostly dry here this weekend. 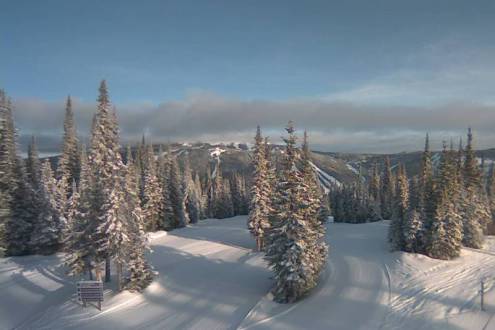