Over the last few days it has been snowing across many higher parts of the Alps. The heaviest snow has fallen in the central and eastern Alps, with 35cm reported on the Hintertux glacier in Austria and as much as 50cm at Italy’s Passo Stelvio. France missed the heaviest of the snow, however, with only a dusting at high altitude. 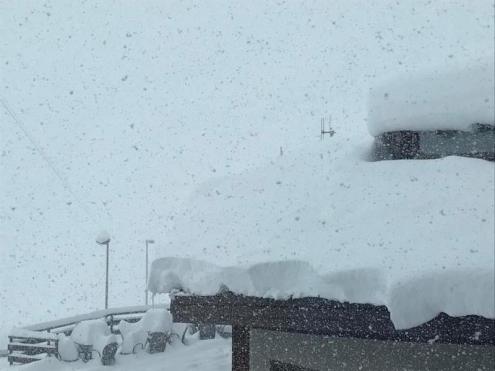 This early snow is welcome news for the glaciers, which have just suffered another challenging torrid summer that not only severely affected snow quality, but also in some cases their viability for summer skiing at all.

It may be too early to have a bearing on how the main winter season might pan out, but it does make for better conditions for those lucky enough to be skiing on one of the small number of glaciers offering skiing at this stage in September (Zermatt, Saas-Fee, Hintertux, Passo Stelvio).

As the heatwave reaches its peak today, this could be the hottest ever recorded day in some western parts of the Alps. 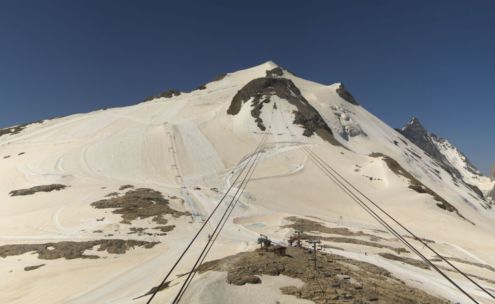 It may look like there is still a reasonable amount of snow on the Grande Motte glacier in Tignes, but it is melting alarmingly fast – 27 June 2019 – Photo: tignes.net

Down in the low valleys and around the big towns and cities (e.g. Chambéry, Grenoble) temperatures have been in the high 30°C’s and could hit 40°C today. Whatever the case, it is certain that many all-time temperature records will fall today, not only in the French Alps but possibly also in western Switzerland, especially in the Valais.

What makes this heatwave even more extraordinary is that we are only in June, with the hottest temperatures of the summer (and most heat records) usually reserved for July and August.

The danger to health of such extreme weather events is well documented, but they also have a significant environmental impact in terms of the damage they inflict on the glaciers.

Right now it may look as though there is plenty of snow up top in the likes of Les 2 Alpes and Tignes but the snow is melting at an alarming rate and, unless there is a major cool down soon, it won’t be long before the glacier begins to look threadbare. Temperatures of 18°C at 3000m – as forecast in the French Alps today - are simply extraordinary. As there hasn’t even been an overnight refreeze, the snow has been slushy from much earlier on in the morning than would normally be expected at this time of year.

Thanks largely to the massive base depths on the Austrian glaciers, the situation is slightly less critical further east in the Alps. However, it has also been brutally hot here, with steadily deteriorating snow conditions.

A major heatwave is expected this week as a plume of exceptionally hot air from Africa will lead to potentially record-breaking temperatures in the Alps. 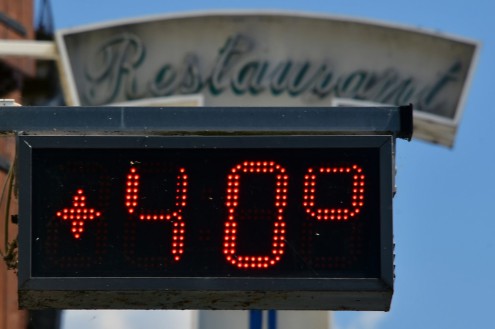 Temperatures not far off 40°C are likely in some low Alpine valleys later this week – Photo: thelocal.fr, 24 June 2019

The French and Swiss Alps will be most affected, with temperatures in some of the lower valleys possibly edging close to 40°C later this week. Afternoon temperatures could easily reach the mid-20°Cs at 2000m, 15-18°C at 3000m and 5-8°C at 4000m, with freezing levels as high as 4800m.

Although it is already hot in the Alps, the heatwave warning only properly comes into effect tomorrow, with the very hottest weather likely from Wednesday onwards. It may cool down a fraction next week, but there isn’t any sign of a proper let-up any time soon.

This is bad news for summer skiing in the Alps (which had got off to a great start after a cold and snowy May), as the glaciers are expected to take a hammering from the scorching temperatures over the next few days.

The deterioration in snow conditions will be most marked in the western Alps (e.g. Tignes, Les 2 Alpes), partly because this is where the hottest weather is forecast but also because base depths here are more modest than they are on the eastern Alpine glaciers (such as Hintertux).

This doesn’t call for immediate panic though - the snow won’t disappear overnight - but it does hugely increase the risk of poor or even unskiable snow conditions on some of the Alpine glaciers later in the summer and/or before their scheduled closure.

It has been an unusually cold and snowy May in the Alps. The conventional winter season may be long over but up on the glaciers snow conditions remain excellent, and exceptional even in parts of Switzerland and Austria where further significant snow has fallen in the last 24 hours. 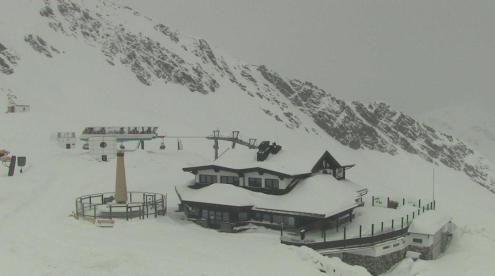 Still looking wintry at altitude in the eastern Alps, especially in Austria. This is Sölden (now closed for skiing) – 21 May 2019 – Photo: soelden.com

Hintertux, for example, has seen another 30cm of new snow from the latest storm, while the Arlberg area has seen at least 60cm falling above 2500m, though there are no longer any ski areas open here.

All this snow may be great news for the Alpine glaciers but it is proving a headache for resorts looking ahead to their summer programmes. This is particularly true in the northern and eastern Austrian Alps where there is still lots of snow above 1500m (and sometimes even lower) on north-facing slopes, and as much as 5m to 6m at 3000m.

Guess what? It’s snowing again across some parts of the Alps! The western Alps will see the heaviest snow this time around, although it should be noted that the rain/snow limit is currently much higher than it was during the last storm. 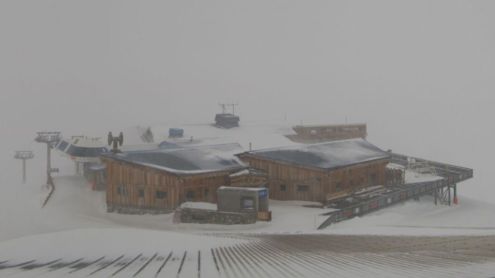 It’s snowing this morning on the Grande Motte glacier above Tignes. Good news for their summer ski operation which commences in mid-June – 8 May 2019 – Photo: tignes.net

It is already raining/snowing across most of the French Alps this morning, with the band of precipitation edging slowly east across the Swiss and western Italian Alps as the day progresses. By contrast, the Austrian and eastern Italian Alps should stay mostly dry during daylight hours.

The rain/snow limit will start at around 2200-2500m in most places (but lower in the western Italian Alps) before dropping to around 1600m tonight. We are expecting around 15-40cm of new snow to fall on the glaciers of the western Alps (e.g. Tignes, Les 2 Alpes, Zermatt, Saas-Fee), which is good news for their summer ski operations.

The storm will reach the Austrian Alps tomorrow, bringing modest top-ups to the Austrian glaciers, most of which already have a huge snow base.

Looking a bit further ahead, it will stay unsettled at least until the weekend with further precipitation at times, mostly in the northern Alps with further significant snow likely for the Austrian glaciers, especially on Sunday.

Updated: 9am Monday 6 May 2019 – Big snowfalls to low levels in the northern and eastern Alps…

There was a lot of snow across the Alps at the weekend, heaviest in the north and east where it fell to very low levels. There are still some flurries across the eastern Alps today, notably in Austria, though the sun is out again further west. 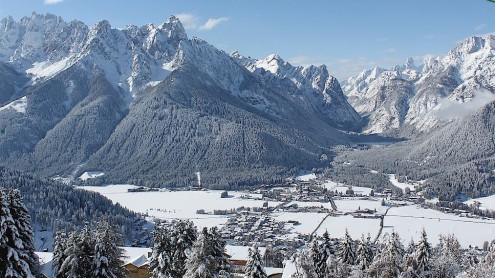 Snow to very low levels in the northern and eastern Alps. This is the Three Peaks area of the Dolomites – 6 May 2019 – Photo: drei-zinnen.info

Over the last couple of days the heaviest snow has fallen across the northern Swiss Alps (e.g. Engelberg), Austria and the eastern Italian Alps (Dolomites). With over 50cm of new snow having fallen in places (e.g. Engelberg, Hintertux), it is going to make for some spectacular skiing once the weather clears, which it is in the process of doing today. This amount of snow is not unheard of in May by any means, but what has been unusual is just how low it has fallen – even down to 400-600m in places.

Yesterday saw the final wave of big “winter” closures, including Tignes, Val Thorens, Chamonix and Cervinia, and from now on the main focus for skiing in the Alps will be on the glaciers. However, exceptional snow cover in the northern Alps means that many resorts (e.g. Engelberg) will actually be able to offer skiing below the glaciers for some time to come. Indeed, for most of the eastern Alpine glaciers (including those of Hintertux, Stubai, Kaprun and Engelberg) these are probably the best conditions that we have seen in for a generation or more.

With most (but not quite all) non-glacial terrain due to close this weekend, the main winter season is pretty much over, but if you think that this means that it is no longer possible to find some excellent snow conditions in the Alps, think again! 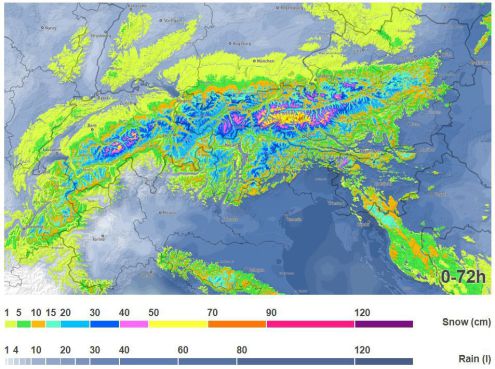 Lots of snow is expected over the northern and eastern Alps over the next few days - Image: bergfex.at, 3 May 2019

Not only are snow depths in the northern Alps still very impressive, but there is also more snow in the forecast, especially for the northern and eastern Alps where 30-60cm of new snow is possible by the end of Sunday, which could benefit the glaciers in Hintertux, Stubai and Kitzsteinhorn. What’s more, the rain/snow limit (which will initially be around 1300-2000m) will drop to below 1000m later in the weekend, and perhaps as low as 500m in places on Sunday. The weather will then improve for a while early next week, following which more snow is likely again at altitude across many parts of the Alps.

Another round of big-name resorts, including Tignes, Chamonix, Val Thorens and Chamonix, are scheduled to close on Sunday. Thereafter, nearly all the action will be confined to the glaciers, although some resorts in the northern Alps (e.g. Engelberg) will still be able to offer skiing well below glacial level, thanks to having such a good snow base.

From next week onwards the largest and most varied ski areas on offer in the Alps will probably be Hintertux, Stubai and Engelberg.

Another round of big-name resorts including Val d’Isère and Ischgl closed yesterday, even though snow conditions in the Alps remain excellent for early May. 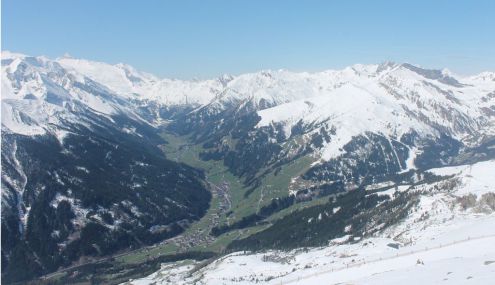 There are now just a handful of resorts open still offering extensive non-glacial terrain, most significant among these being Tignes, Val Thorens and Cervinia, all of which are scheduled to close on Sunday.

The weather in the Alps remains cool and unsettled with further rain/snow due at times over the coming days, especially in the northern and eastern Alps. The rain/snow limit will sit between 1400m and 1800m over the next couple of days, but could descend to as low as 400-700m in parts of Switzerland and Austria later in the weekend.

Over the next five days the greatest snowfall accumulations (in terms of open ski areas) will be on the Austrian glaciers, with the likes of Stubai, Hintertux and Kitzsteinhorn all likely to collect 30-60cm of new snow by Monday. This new snow will add nicely to what are already huge snow bases - great news for their spring and summer ski operations.

Another resort worth mentioning is Switzerland’s Engelberg, which will also see new snow this week, where the runs are expected to remain open all the way down to 1800m until 25 May.