April has been an unusually cold month, both in the Alps and across much of central and northern Europe. Next week, a more seasonal westerly airflow will return to the Alps, but not before a blast of Arctic air delivers some fresh snow to relatively low altitudes this weekend. 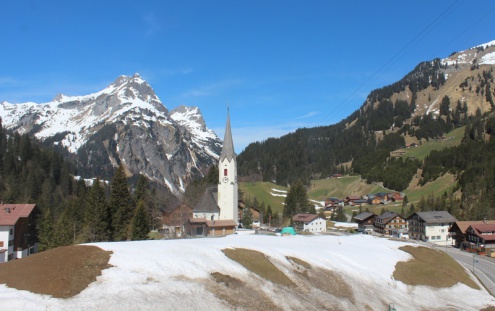 The spring thaw may be accelerating in the Austrian Vorarlberg, but the amount of snow left in Schröcken (1260m) this late in April is testament to how cold the month has been as a whole – 30 April 2021 – Photo: warth-schroecken.at

Today, there will be quite a lot of cloud across the Alps with an increasing chance of showers in the west. A few centimetres of snow will fall here and there above about 1800-2200m, especially in the high border areas between Switzerland and Italy, but the best of any sunshine will be in the north-eastern Alps (e.g. Salzburgland).

A new storm will start to form across the Alps on Saturday, with precipitation becoming more widespread. The rain/snow limit will remain close to 2000m before dropping sharply from the north-west early on Sunday. The heaviest of Saturday’s snow is likely to fall later in the day and overnight across the central Alps (e.g St Moritz), but it will be the northern and north-eastern Alps that are most favoured (e.g. Kaprun) on Sunday, with a rain/snow limit lowering towards 1000m.

Lift-served publicly accessible skiing in the Alps is limited to a handful of resorts in Switzerland and Austria, including Zermatt, Engelberg, Hintertux and Kaprun.

April has been unusually cold in the Alps and, while the weather in the Alps remains chilly today, it is set to turn warmer generally towards the weekend. 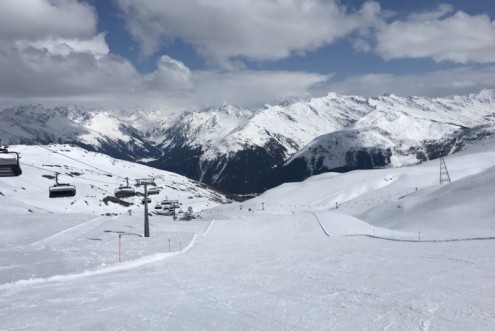 Snow conditions are wonderful in Davos this week, but the weather is set to warm up towards the weekend – 21 April 2021 – Photo: “Ski-Chrigel” via alpinforum.com

Most places will be dry today although there will be a scattering of showers, most frequent in the south-western Alps and close to the high border areas between France/Italy and France/Switzerland, with a little snow above 1400-1700m. The best of any sunshine will be in the northern Austrian Alps.

With a colder than average April, and occasional snowfalls to relatively low levels, late season snow conditions have been exceptional in those few ski areas still open and for those few lucky skiers/snowboarders still able to access them.

However, from tomorrow, the weather will start to warm up significantly with freezing levels set to rise to 3000m by the weekend, at least in the western Alps. This increase in temperature will accelerate the thaw which, at medium/high altitudes at least, has been slow so far this April.

Publicly accessible lift-served skiing in the Alps is confined to a handful of resorts in Austria and Switzerland, including Obertauern, Ischgl, Kaprun, Zermatt, Davos and St Moritz.

The Alps are under the influence of a cold north-easterly airflow that will bring further snow to the east today, particularly to Austria. 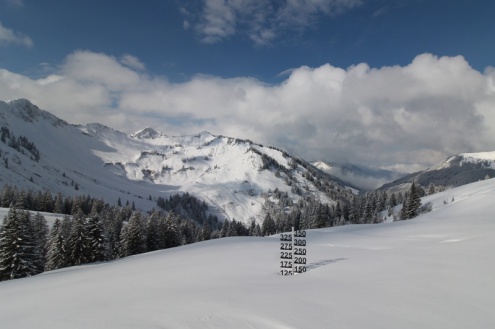 Looking more like mid-winter than mid-April in the Austrian Vorarlberg today. This is Furkajoch – 13 April 2021 – Photo: foto-webcam.eu

This follows a major storm that has delivered significant snow to low altitudes across most parts of the Alps. Given the strength of the sun at this time of year, any low-lying snow will soon melt again, of course, but not before there have been further accumulations in the east, notably in the central and eastern Austrian Alps (e.g. Obertauern).

Elsewhere in the Alps, there will be plenty of dry weather today with the best of any sunshine the further south-west you are. It will be cold and windy everywhere though. Looking further ahead, it will remain on the cold side for the rest of the week, with plenty of dry weather but also some flurries here and there, chiefly in the southern and eastern Alps.

Needless to say, snow conditions are excellent for the time of year in those few resorts still open. Note that publicly accessible lift served skiing in the Alps is still only possible in Austria and Switzerland though.

Significant widespread snow has returned to the Alps, with the heaviest of today’s snow falling in central and southern regions. 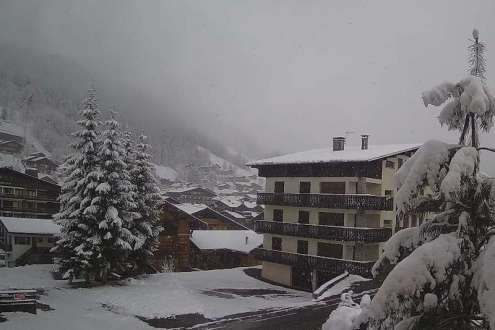 Most of the Alps will see (or have already seen) some significant snow from the current storm. This is Les Gets, where heavy snow fell on Sunday night and Monday morning – Photo: lesgets.com, 12 April 2021

Most of last weekend’s snow was confined to the south-western Alps (e.g. Isola 2000, Prato Nevoso, however, snow became more generalised in the west late on Sunday, pushing further east into the central Alps in the early hours of Monday morning.

Today the heaviest snow will fall in the central and south-eastern Alps (e.g. St Moritz, Livigno, Passo Tonale, Obergurgl) and in the Dolomites later in the day. The rain/snow limit will vary, but will generally sit between 400m and 700m in the central Alps but up to 1300m-1600m in some south-eastern areas before it descends to low levels later in the day and overnight.

Tuesday’s weather will remain unsettled with more snow in the eastern Alps, especially in Austria, while the western Alps enjoy a mostly dry, if rather chilly, day with sunny spells.

The rest of the week will remain on the cool side with plenty of dry weather but also a few snow showers here and there, most likely in the south and east.

On the whole, anyone lucky enough to be able to ski in the Alps this week should find excellent conditions for mid-April. Note that publicly accessible lift-accessed skiing remains confined to a handful of resorts in Switzerland and Austria though.

Temperatures have now recovered after a remarkable week of weather in the Alps, which saw record-breaking cold in some northern areas and some snow, chiefly across the northern Alps, and heaviest in Austria and Switzerland. 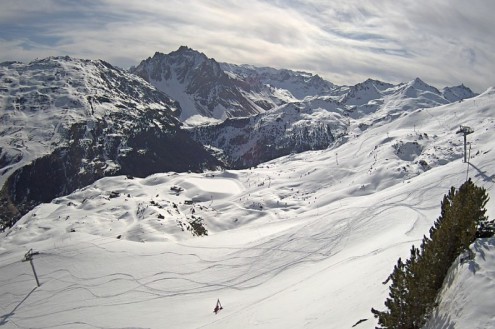 Lots of snow still at altitude in Méribel, even though lift-served skiing has not been possible for most of the season – 9 April 2021 – Photo: meribel.net

This unusually cold spell was the result of northerly wind coming straight from the Arctic, leading to temperatures dropping as low as -30°C in places above 3000m! The heaviest snow fell in the northern Swiss Alps (e.g. Engelberg) and north-western Austrian Alps (e.g. Kleinwalsertal), where more than 50cm has fallen this week.

After something of a reprieve today, the weather in the Alps will turn unsettled again this weekend but with most of the snow (1200-1600m) confined to the southern French and south-western Italian Alps, heaviest close to the high border areas. Most other parts of the Alps will stay dry this weekend, with variable cloud cover and the best of the sunshine the further north-east you are. It will be quite mild, and even warm in some Foehn-affected valleys of the central and northern Alps.

More significant and widespread snow is expected across the Alps on Monday, heaviest in the south, along with a general drop in temperature.

It is a lovely day in the Alps today, with almost wall to wall sunshine and pleasant but not excessively warm temperatures. It’s all change tomorrow though, with cold Arctic air set to flood south across the Alps later in the day. 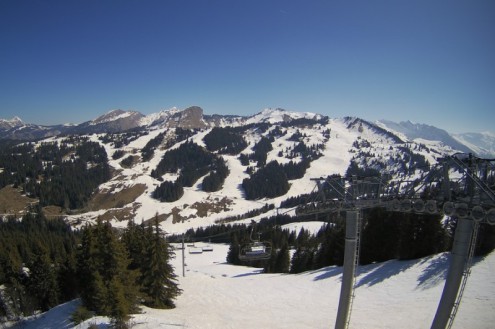 Spring sunshine in Les Gets today but it will turn much colder later tomorrow – Photo: lesgets.com, 4 April 2021

This Arctic blast will bring significant snow to very low levels across the northern half of the Alps between Monday evening and Wednesday, with 30-50cm in some favoured parts of the northern Swiss Alps (e.g. Engelberg). The southern Alps will escape most of the snow, though it will also become cold and windy.

This imminent and dramatic return to winter follows last week’s very warm spell of weather when temperatures hit the twenties in some lower Alpine valleys. Not surprisingly, this led to a rapid thinning or loss of the snowpack across the lower slopes of the Alps. The breaks will be put on the spring thaw with the cold air next week though, leading to an expected net increase in snow depths across the northern Alps by the middle the week, at least above 1500m or so.

Anyone lucky enough to be able to ski in the Alps next week should find some excellent snow conditions on offer once the weather settles down from mid-week onwards. Note that lift-served publicly accessible skiing in the Alps is still only possible in parts of Switzerland and Austria.