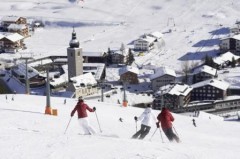 With the highest average snowfall of any major ski area in the Alps, Lech-Zürs is rightly regarded as one of the safest bets in Austria.

But whilst the snow cover is often excellent, snow quality is not quite as consistent as it might be in, say Obergurgl or Ischgl whose slopes are that bit higher. That said, Lech and Zürs have more powder days.

Where to ski in poor snow:

Locally, the best snow is often found in the Trittkopf area above Zürs, as it faces north-west.

Later in the season, however, the north-facing slopes in Warth are often in better condition than Lech's sunnier ones.

Lech has very few trees for shelter in bad weather, with even fewer in Zürs.

In poor visibility, the lightly-wooded lower slopes on the Oberlech side are probably the best option.

Lech-Zürs is one of our: