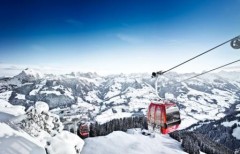 At lower levels, cover is often worn and patchy, though recent improvements in snow-making mean that you can nearly always get back to resort.

Higher up, snow cover is much more reliable, but none of the slopes exceed 2000m and good snow is far from assured. The best conditions are often found at Resterhöhe which can open as early as October, aided by artificial snow. By contrast, the south-facing Kitzbühlerhorn sector is the first to suffer in warmer weather, and is often completely devoid of snow later in the season.

Snow-making is improving year on year, but is still not comprehensive.

Kitzbühel has lots of woodland runs for shelter in bad weather, especially on the Hahnenkamm, directly above town.

The Resterhöhe sector above Pass Thurn nearly always has the best snow conditions in Kitzbühel. It also has comprehensive snow-making facilities, which can allow the area to open as early as October.