The 2016-17 ski season was generally a poor one for the Alps. While there were one or two exceptions, mostly at high altitude in the south-western Alps, in the vast majority of Alpine ski areas it was simply too warm and too dry. It was also the fourth consecutive year where the season started below par – and the third consecutive year with an exceptionally poor start. 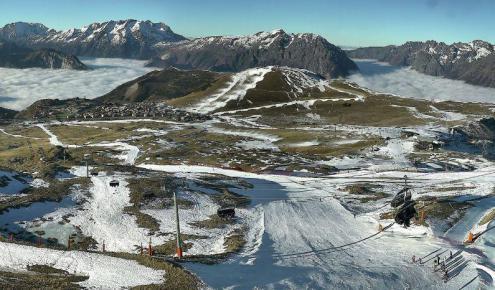 The best overall snow conditions of 2016-17 were in the high altitude ski resorts of the western and south-western Alps, such as Val d’Isère, Tignes, Val Thorens, Val Cenis, Montgenèvre, Sestriere, La Thuile, Cervinia and the Monte Rosa region. 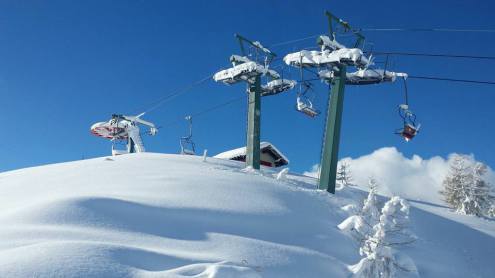 Higher parts of the south-western Alps bucked the generally poor trend in 2016-17. This was the Monte Rosa region on 27 November 2016 – Photo: facebook.com/MonteRosa-ski

While it is more difficult to single out the areas that experienced the poorest snow conditions, suffice it to say that most low resorts had a challenging season, especially those in the northern Alps where snow-making is not generally as efficient as it is in the south.

The first half of November was snowy, exceptionally so across the north-western Alps where you would have to go back 1996 to find anything comparable, at least above 1800m. 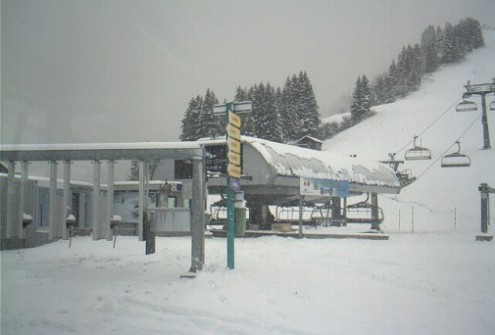 Promising pre-season snowfall in the Portes du Soleil. This was Les Crosets on 8 November 2016, way before the lifts were open – Photo: telemorgins.ch

Unfortunately, this proved to be a false dawn, as a sustained spell of warm weather set in during the second half of the month (which ended up lasting through much of December).

The dreaded Foehn was also to make an appearance, accelerating the thaw across the northern half of the Alps so much that most of the season’s early optimism had faded by late November.

It wasn’t quite all doom and gloom though. The same southerly airflow responsible for the “snow-eating” Foehn on the northern side of the Alps delivered copious quantities of snow to a select band of high resorts in the south-western Alps, including the Monte Rosa region, Sestriere, Val d’Isère, Montgenèvre and Val Cenis.

The rain/snow limit was quite high (typically around 2000m) but some resorts (e.g. Val Cenis) recorded 1.5-2m of fresh snow in just a couple of days in late November, helping to set them up for the rest of the season. 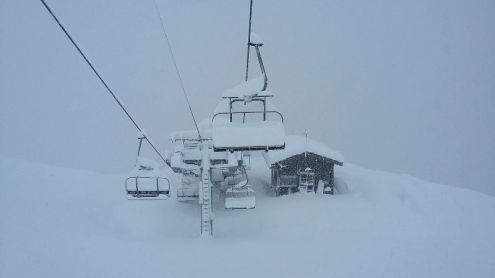 Around 2m of new snow fell at altitude in Val Cenis in late November. This was the resort on 25 November 2016 – Photo: facebook.com/ValCenis.Officiel

For the most part, however, late November and December were mild and exceptionally dry, with most of any remaining (natural) snow cover disappearing below 1800-2000m. Indeed, some parts of the Alps didn’t see a single flake of natural snow for more than a month. 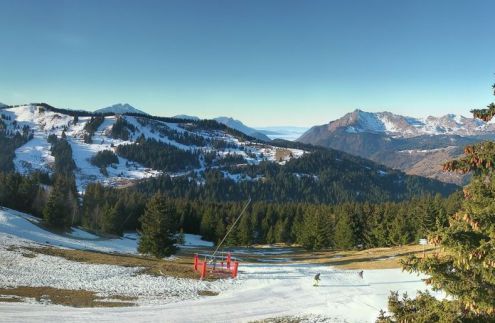 Patchy snow cover in Les Gets over New Year. This was the resort on 31 December 2016 – Photo: lesgets.com

The situation was slightly better elsewhere in the Alps but still far from ideal. The Dolomites were equally drought-stricken but managed to open most of their pistes thanks to their state-of-the-art snow-making.

The low resorts of the eastern Alps (e.g. Kitzbühel, Saalbach) also had plenty of pistes open (again mostly thanks to artificial snow) but precious little natural snow in the run up to Christmas. 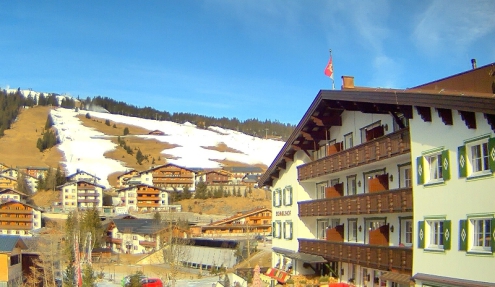 Lech was still heavily reliant on snow-making over New Year. This was the resort on 2 January 2017 – Photo: lech.com

Only the higher resorts of the south-western Alps (e.g. Monte Rosa region, Cervinia, Val d’Isère, Val Cenis) offered anything like a proper winter experience over the festive period, though even here snow cover was thin or patchy close to resort level. 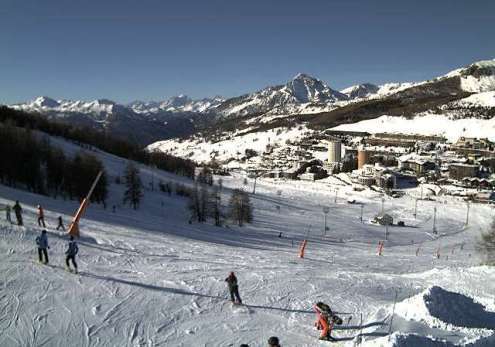 Sestriere was one of the few places with decent resort level snow cover over the festive period. This was the resort on 23 December 2016 – Photo: vialattea.it

Snow conditions in in the eastern Alps (e.g. Austria) improved over the New Year, and particularly early on in January when St Anton and Klosters were transformed by their first serious dump of the winter. 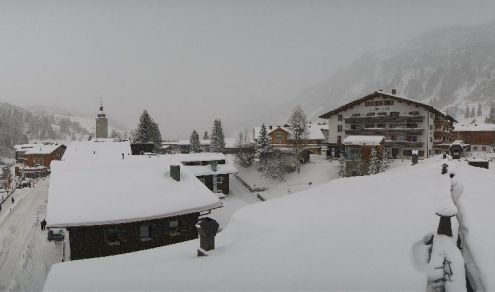 Winter finally arrived in the Arlberg in on 5 January 2017. This is Lech – Photo: lech.com

Meanwhile, the north-western Alps had to wait until the middle of January to finally kick-start proceedings with a major winter storm bringing 40-80cm of new snow to resorts as far apart as Chamonix and Lech. 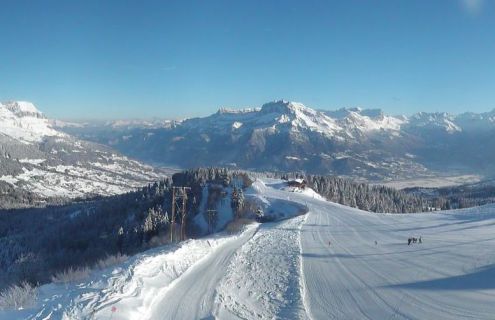 Mid-January saw much improved conditions for the low resorts of the north-western. This is Megève on 17 January 2017 – Photo: megeve.com

Further south, many resorts were still in the grip of drought and heavily reliant on artificial snow, especially in southern Austria (e.g. Nassfeld) and the Dolomites (e.g. Selva). 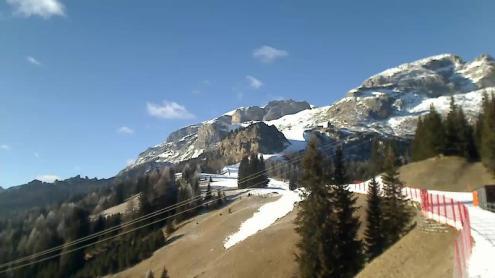 The snow drought continued in the Dolomites into January. This was Corvara on 11 January 2017 – Photo: snow-eye.com

The rest of January remained relatively dry and generally cold with plenty of good piste skiing on offer, even if snow depths were considerably below average in most resorts. There were also a handful of off-piste opportunities on offer, mostly in the north and west, but far fewer than might be expected at this time of year.

It turned warmer around the turn of the month, and continued relatively mild into February. Early in February there was some significant snow, especially at altitude in the western Alps, but there was also some rain in the mix, meaning that the lowest resorts (e.g. Morzine, Megève) were still struggling to build a convincing base.

The snow-starved southern Alps (e.g. Dolomites) also finally saw some snow, but still not nearly enough to get depths back to where they should be. 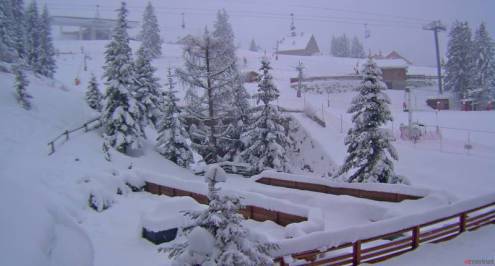 February half term saw reasonable snow conditions for most, at least on-piste, with the best of any powder in the south-western Alps (e.g. Sestriere). Below about 1500m, however, snow cover remained worryingly thin, especially in the northern French and northern/western Swiss Alps. 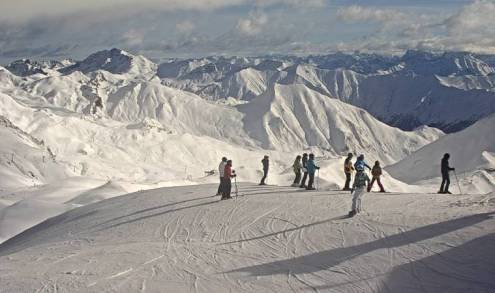 The mid-February holidays offered plenty of good skiing, on-piste at least. This was Ischgl on 22 February 2017 – Photo: ischgl.com

It turned milder towards the end of February with some fresh snow at altitude but again with rain troubling many lower areas leading to highly variable snow conditions as we headed towards March. 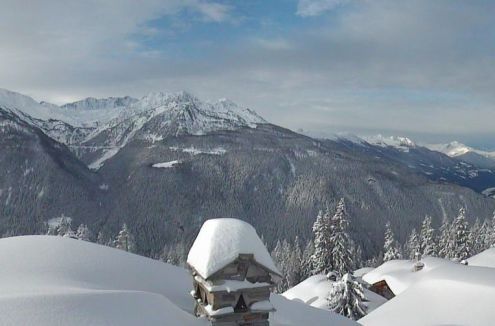 Good conditions in the high French resorts as February turned into March. This was La Rosière on 8 March 2017 – Photo: larosiere.net

The unsettled but relatively mild weather continued into early March with lots of snow at altitude, mostly in the western Alps. The southern and eastern Alps saw less snow and by mid-month everywhere had settled down again, with the strong spring sunshine accelerating the thaw on low-lying slopes.

The second half of March saw continued mild weather, especially in the northern Alps where many low resorts were threadbare by the end of the month.

The best conditions, as they had been for most of the season, were in the higher resorts of the western and south-western Alps (e.g. Val Thorens, Val d’Isère, Sestriere, Monte Rosa and Montgenèvre) where there were further snowfalls at times. 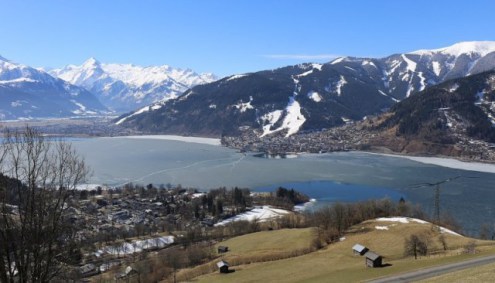 Warm March weather led to a rapid thaw at lower altitudes. This was Zell-am-Zee on 11 March 2017 – Photo: zellamsee-kaprun.com

Early April saw snow conditions in the Alps become more polarised than ever. At altitude conditions were still reasonable, especially in the western Alps, but they were increasingly poor lower down with some resorts forced to close earlier than planned.

Only towards the end of the month did winter return for one final fling, which lasted into May, but for most resorts it was too late and the end of the season was a bit of an anti-climax. 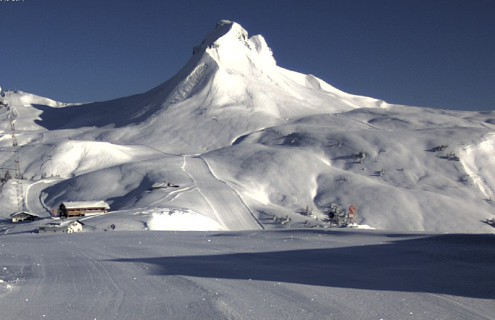 Winter returned at the end of April but for most it was too late. This was Damüls on 20 April 2017 – Photo: damuels.at

Unlike in the US, there is no real culture for collecting and comparing snowfall data in ski resorts on this side of pond. With a bit of digging, a number of figures are available but many of these are measured at resort level which means they are unlikely to be indicative of the ski area as a whole.

This point is of particular importance with regards to the 2016-17 season as it was so mild, meaning that there would have been a bigger discrepancy between snowfall at resort level and snowfall at altitude than in a more 'normal' year.

Furthermore, it is important to remember that snowfall average is only one aspect of the overall snow quality equation, so should certainly not be regarded as the most important factor when assessing snow reliability in any given resort.

While we can speculate that some higher parts of the south-western Alps (e.g. Val Cenis, Sestriere, Montgenèvre) may have had close to average snowfall, for the vast majority of the Alps, snowfall was below average, and in many cases seriously below. 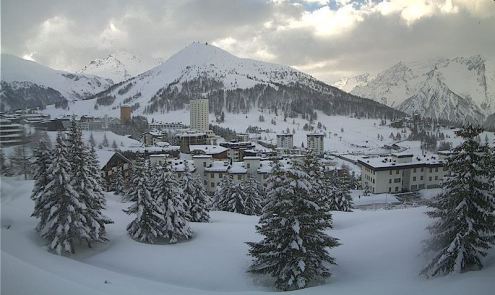 Sestriere was one of the few resorts to enjoy consistently good snow cover in 2016-17. This was the resort on 3 April 2017 – Photo: vialattea.it

However, it shouldn’t be forgotten that exceptional snowmaking allowed this region to enjoy great piste skiing for much of the season, despite its below average figures.

The western Italian resorts did somewhat better but were still below par, with 3.3m of snow falling at resort level (2050m) in Cervinia and 5.7m higher up on Plateau Rosa (3400m) - where 4.5-5m and 7-8m respectively would be more the norm.

Snowfall was universally below par in Switzerland, with just 363cm falling in the eastern Swiss resort of Arosa (1850m), around 60% of its long term average.

Further west, Verbier managed a healthier looking 514cm (at Les Ruinettes 2200m), not far from its 576cm average, but lower altitudes would have seen a greater discrepancy than their long term average.

With the exception of some high resorts close to the Italian border (e.g. Val Cenis, Montgenèvre), French resorts also struggled. Avoriaz (1800m) saw just 481cm compared to its average of around 7.6m (the highest in France) while Arc 2000 saw 421cm when it would normally expect around 600cm.

Austria was, however, home to the snowiest ski resort of 2016-17, perennial winner Warth-Schröcken, which clocked an impressive 925cm at just 1650m. Even this, however, was significantly below its 10.6m long term average. Despite the relatively high snowfall, it is interesting to note that the snow-pack here never exceeded 1.5m.

The main conclusions we can draw from the 2016-17 Alpine ski season are: