2013-14 was a season of mixed fortunes. For the southern Alps it was something of a vintage with record (or near record) breaking snowfall in places. By contrast most of the northern Alps endured below average snowfall, with the low resorts of the northern Austrian Alps suffering most.

One thing all regions had in common though (even the excessively snowy areas of the southern Alps) was significantly above average temperatures – thanks to persistent south to south-westerly winds. 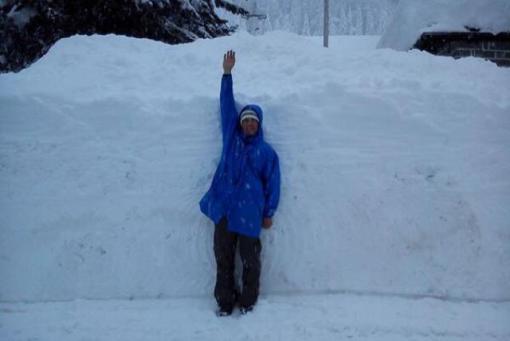 Early optimism was rife as a succession of storms dumped significant snow at altitude throughout November. However, it remained mild and (with rain lower down) only the higher resorts managed to build convincing bases. This was to prove telling in December when high pressure was dominant and many lower resorts started to look threadbare in the run up to Christmas.

Not everyone was struggling though. At altitude there was still plenty of good piste skiing to be had with the high resorts of north-western Italy (e.g. Cervinia, Monterosa Ski) the pick of the early runners. 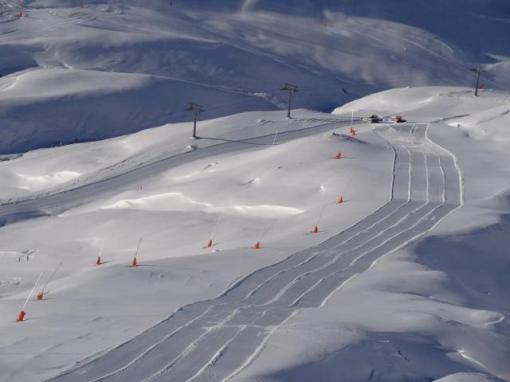 Looking good in Ischgl in late November 2013, but it was to prove a frustrating season in Austria as a whole.

As Christmas approached the weather took a dramatic turn culminating in record-breaking storms for parts of the central and eastern Italian Alps on 25-26 December. Lombardy was particularly hard hit with 2.3m of new snow in less than 48 hours for Madesimo leading to a complete power outage and unprecedented chaos.

Other Italian resorts also experienced huge snowfalls, but precipitation was more erratic on the northern side of the Alps, which was to set the tone for much of the season. 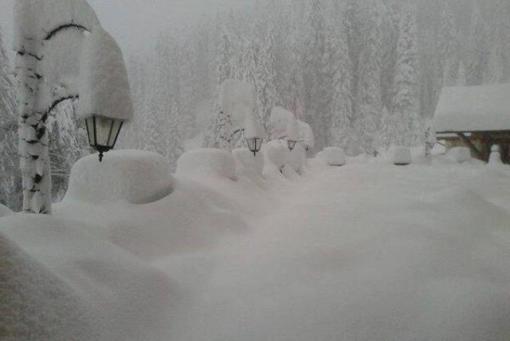 Ever wondered what 2m of fresh snow looks like? Photo: Madesimo - 26 December 2013

January summed up the 2013-14 season perfectly, with further massive snowfalls across Italy and the southern Alps, but only “bits and pieces” further north. This proved highly frustrating for the lower Austrian resorts (as well as some northern Swiss ones) with seemingly relentless warm Foehn winds and patchy cover.

Elsewhere in the northern Alps, the situation improved the higher and further west you found yourself, with reasonable conditions in most French and western Swiss resorts - even if off-piste opportunities were limited.

By contrast, many southern resorts had more snow than they knew what to do with, as storm after storm continued to bubble up in the Mediterranean, lasting well into February. This time it was Arabba in the Dolomites that hit the headlines, with 2m of snow in as many days prompting local meteorologists to describe the ensuing chaos (Arabba was cut off for days) as unprecedented in modern times. 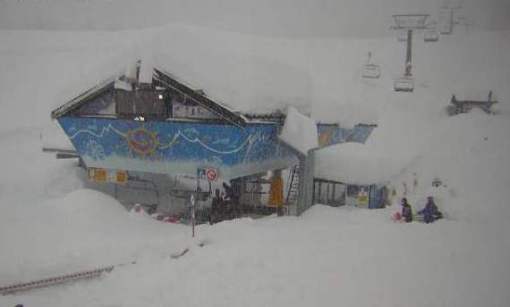 2013-14 was one of the snowiest years ever seen in the Dolomites. This is Cortina in early February.

The snow gods were a little more even in their distribution of the goods during February, but it never really changed the game for the north-eastern Alps (including most of Austria) where there remained little or no natural snow cover below 1000-1200m. Here, the lower runs continued to rely on man-made snow (as they had done for most of the season) and any serious off-piste was out of the question. 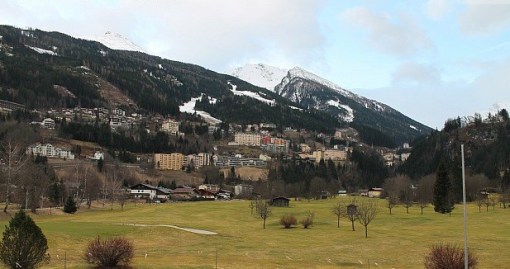 Anyone for golf? This is how Bad Gastein (and many other low Austrian resorts) looked in early February 2014.

As spring approached, the weather settled down again and March was predominantly warm and sunny. This was of little consequence for the southern Alpine resorts, whose massive bases had already guaranteed them safe passage through the remainder of the season. However, it quickly became problematic for the low resorts of the northern Alps – especially Austria – where some smaller resorts were forced to close prematurely.

Winter did briefly return at the end of March but April was not notably snowy and the 2013-14 season wound down in relatively tame fashion.

Note: unless otherwise stated, all measurements are at resort level.

Not surprisingly Austria fared worst of the four main Alpine countries ,with only Carinthia and Osttirol (both in the extreme south) above average. The situation was particularly dire in the low resorts of the Tirol and Salzburgerland with accumulated snowfall totalling just 3.5m up top (1800m) in the Ski Welt (Söll, Ellmau, Westendorf) and 1.2-1.5m in the valleys, around half what you might expect in an average year.

Higher up the stats were not much better. Warth-Schröcken (near Lech) has the highest average snowfall in the Alps (10.6m), but only managed 5.8m this time round, its second lowest aggregate since records began back in 1977. 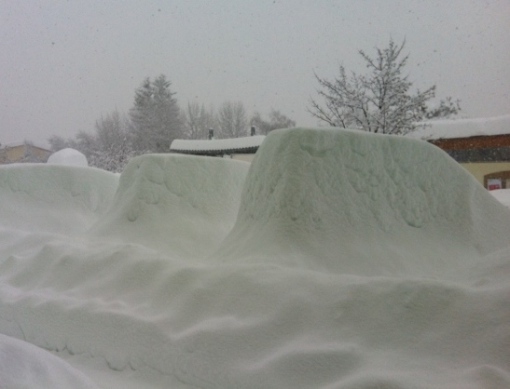 Not all Austrian resorts suffered a snow drought in 2013-14. This is Nassfeld-Hermagor in Carinthia (close to the Italian border).

Switzerland fared better, though snowfall across much of the northern Alps (e.g. Wengen, Engelberg) was still below average. By contrast, resorts close to the Italian border were considerably above par, with St Moritz, Saas-Fee and Zermatt doing particularly well. Indeed Zermatt, which is known for its dry climate, and averages just 3m at resort level, picked up 5.1m this time around, one of its snowiest winters of recent times.

In France, snowfall was generally a little below average across most of the northern Alps - particularly in the Tarentaise, with 4.4m in Val d’Isère and 5.4m in La Rosière. Avoriaz did manage a more impressive 7.8m (almost bang on average), but a long way short of the 11.8m achieved last year when we crowned it snowiest resort in the Alps 2012-13.

This season’s snowiest resort in France was little Isola 2000 near Nice, which bagged a massive 10m over the course of the season, it’s second snowiest winter ever recorded. 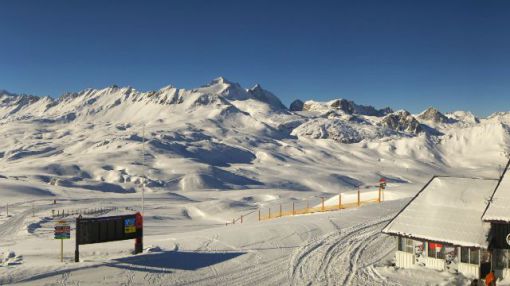 Val d'Isère had a steady but unremarkable season, with 4.4m of snow - a little below its long-term average.

Which leaves us with Italy where, without exception, snowfall was above the long term average. In the west, Cervinia clocked 8.3m at resort level and 11.4m up top (some 30-40% above normal), but it was central and eastern resorts that really caught the eye. 6.6m for Livigno and 9m for Madesimo (at resort level) is double what you would expect in these Lombardy resorts. 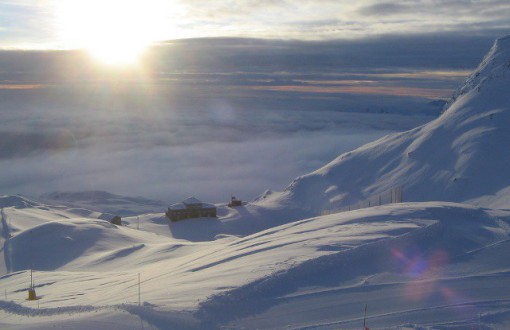 Italy had one of its best snow seasons ever. Gressoney (pictured) was no exception.

Elsewhere in Europe, the Pyrenees had another very snowy season, even if they didn’t quite match their record-breaking feats of the previous winter. Cauterets in France clocked 11.2m (at 2000m), around twice its long term average. 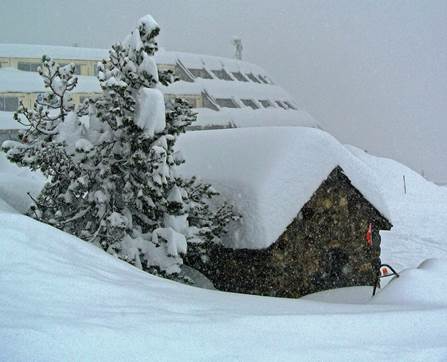 Another very snowy year for the Pyrenees. This is Piau Engalay.

Scotland also had a memorable winter – though it was never particularly cold, and down in the valleys there was little if any snow. At altitude, however, it was an entirely different story, particularly in the western resorts of Glencoe and Nevis range, where persistent south-westerly winds delivered unprecedented quantities of snow.

During the middle part of the season Glencoe reported snow depths of 5m or more for weeks on end, 7m even at one stage in the Main Basin (source: Winterhighland.info). Exciting as this sounds, the combination of bad weather and excessive snowfall proved a logistical headache for resort authorities and visitor numbers suffered. 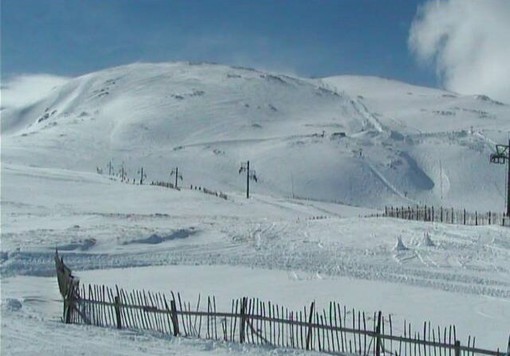 Too much snow for Glencoe this year! This was one of the few fair-weather days.

The main conclusions we can draw from the 2013-14 Alpine ski season are: