The 2017-18 winter season was a snowy one for many parts of the Alps, and an extraordinarily snowy one in the north and west, especially at altitude - records tumbled, roads were blocked (sometimes for days on end) and, by spring, some resorts were claiming upper snow depths in excess of 7m! 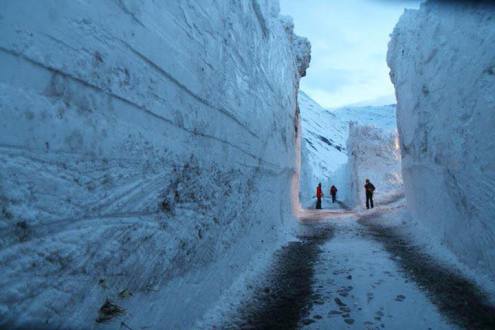 Too much snow for Bonneval sur Arc, where the road was blocked by avalanche activity for days on end – Photo: facebook.com/Meteoalpes, 10 January 2018

While most resorts saw a large amount of snow in 2017-18, any assessment of whether it was a great season is always going to be subjective – very much dependent on the type of skier/boarder and what exactly they were looking for in their holiday.

Assuming that there is plenty of snow on the ground, it is ultimately sunshine that the average holiday-maker is after, and in 2017-18 this was unfortunately in short supply. It was also a mild season overall, with plenty of nuisance value rain at lower altitudes.

After four below par starts to the Alpine season, three of which were the worst ever witnessed, the stakes were high in autumn 2017.

Early season nerves were partly settled by regular autumn snowfalls - mostly at altitude but also, at times, lower down – but the industry remained on edge. After all, we had been here in previous years, when promising early November snowfalls were followed by prolonged December droughts. 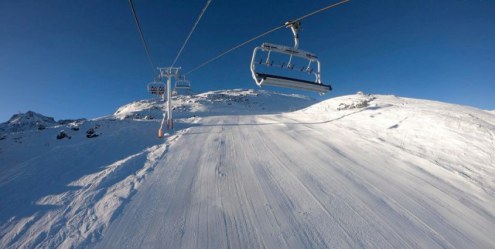 By late November many high (and some low) resorts were already in excellent shape. This was Val Thorens on 27 November 2017 – Photo: facebook.com/ValThorens.resort

This year was different though. With the exception of parts of the southern French and western Italian Alps (e.g. Cervinia), where natural snow cover was still patchy, most resorts had an excellent early base by early December and it remained very unsettled throughout the month bringing lots more snow.

It wasn’t entirely plain sailing though as some milder interludes did lead to rain at times lower down but, generally speaking, there was lots of snow throughout December. This was especially the case in the northern and western Alps where, by the end of the month, Avoriaz had upper base depths of 2.4m, and Engelberg had 4.3m. 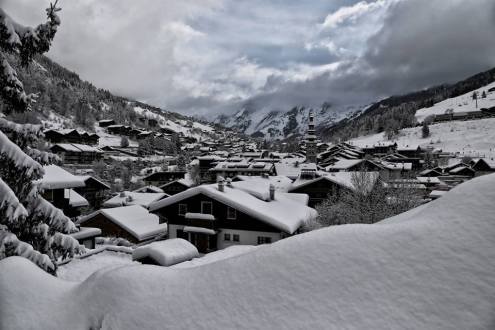 New Year was very snowy for many parts of the Alps. This was La Clusaz on 28 December 2017 – Photo: facebook.com/LaClusaz

January saw no let-up in the weather, as storm after storm continued to pound the Alps. Thanks to milder temperatures, rain did continue to prove a nuisance for some lower areas, but snow just kept piling up at altitude, particularly in the northern and western Alps where towards the end of the month many resorts were claiming record snow depths for the time of year. 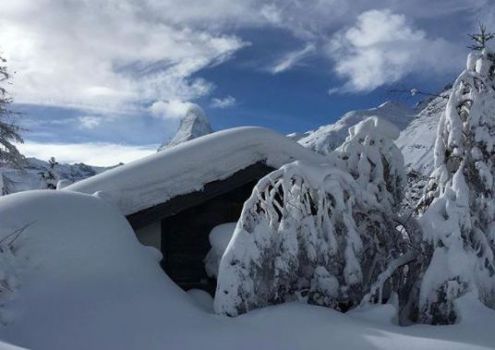 By 22 January 2018, Tignes, Flaine, La Rosière, Les Arcs, St Anton, Cervinia and Saas-Fee all boasted settled snow depths in excess of 4m, while Engelberg claimed to have more than 6m!

You would have to go back to 1999 - the infamous avalanche year - to see such impressive depths over such a wide area, but that year the record snow depths hadn’t accumulated until well into February. 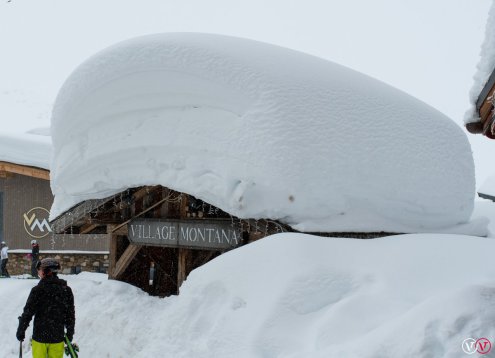 This time around, February saw the weather actually calm down somewhat, though there were still some significant snowfalls in places, with the southern Alps (e.g. Sestriere, Cortina, Nassfeld) most favoured early on in the month. 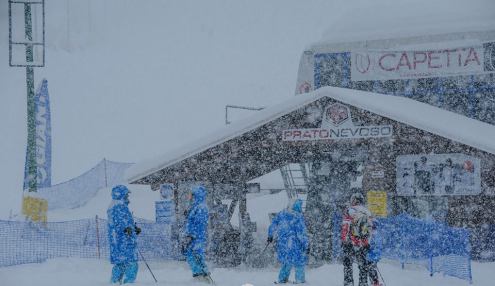 Early February saw the heaviest snowfalls shift to the south-western Alps. This was Italy’s Prato Nevoso on 5 February 2018 – Photo: facebook.com/PratoNevoso

The main UK half-term week (10-17 February 2018) saw excellent snow cover across the board, even if a spell of warm weather led to a temporary deterioration in snow quality for some of the lower resorts later in the week.

However, it was all change by the end of the month, when bitterly cold Siberian air (the 'beast from the east') engulfed much of western Europe. 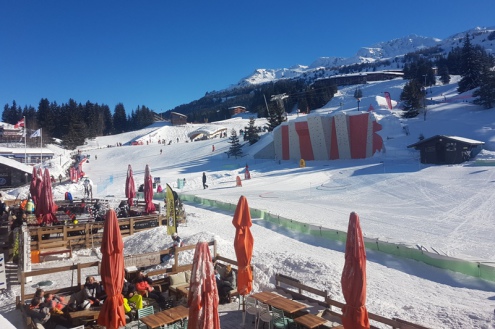 Half-term saw excellent snow-cover across the board. This was Arc 1800 on 13 February 2018 – Photo: weathertoski.co.uk

Early March was the coldest period of the season. There was also some fresh snow, heaviest this time in the southern French Alps (e.g. Risoul, Isola 2000), but the main talking point was the temperatures across the Alps, with -20°C widely reported, and even -30°C on some of the glaciers (not taking into account wind chill!). 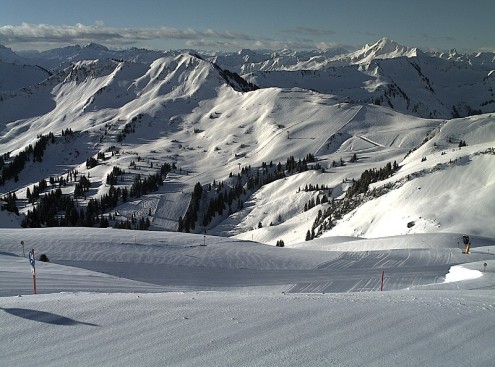 There was excellent snow but Siberian temperatures across the Alps in early March. This was Mellau in the Austrian Vorarlberg on 8 March 2018 – Photo: mellau.at

The rest of March was highly variable, with milder spells interspersed with further blasts of frigid Siberian air.

It was the Italian resorts (such as Passo Tonale and Livigno) which saw the best of the fresh, but snow depths remained most impressive in the north and west, where resorts typically had between 3m and 5m at altitude, and Engelberg had 6.6m – in fact, its Titlis glacier boasted the deepest pack in the world for much of the season. 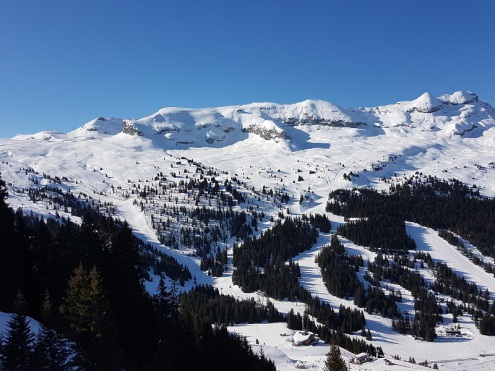 April was mild, and not notably snowy. Spring snow conditions were the order of the day at lower altitudes, but there was still some excellent skiing to be found higher up, and snow depths remained exceptional throughout the month, especially in the north and west. 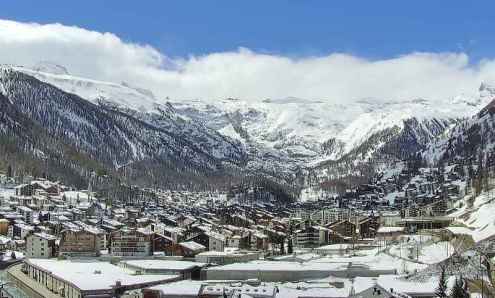 This point is of particular importance in seasons when the weather is changeable but mild, and frequent low level rain can lead to greater than normal discrepancies in cumulative snowfall totals from top to bottom. This was precisely the case in 2017-18 when there were huge snowfalls at altitude but also plenty of rain lower down. In the northern French Alps, for example, this meant that the snow-pack was only impressive above about 1200-1300m and only exceptional above about 1500-1800m.

Even taking into consideration that snowfall figures in the Alps are somewhat unreliable, what can safely be said is that most parts of the Alps saw above average snowfall in 2017-18.

Snowiest of all the French resorts though was Val Thorens, which saw 10.16m at resort level - the average here being closer to 6m. 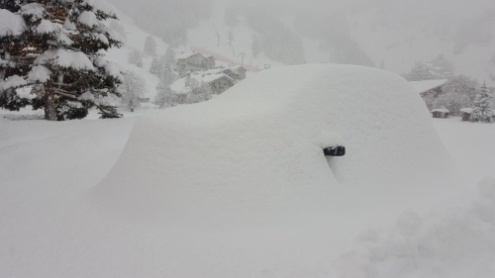 The southern French Alps also fared well, even if they got off to a slightly slower start than their northern French counterparts. Here Isola 2000 saw 8.17m at resort level, similarly some way short of its 10.4m record set in 2008-09, but still nearly twice its long term average. 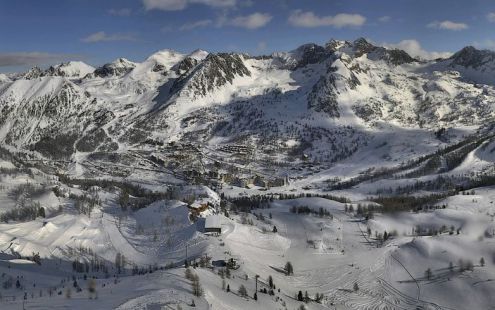 Over in Switzerland, the western resort of Verbier saw 9.4m at Les Ruinettes (2200m) not far off the record of 10.3m clocked up during the vintage season of 2012-13. Further east, Arosa was also considerably above average (though not record-breaking) with 7.5m at resort level.

Austria was also generally above par, except in the “snowiest resort in the Alps” where little Warth-Schröcken’s 9.8m was actually a fraction below its 10.3 long term average! Nearby Lech, by contrast, was a fraction above average with 7.5m at resort level. Further east, Kitzbühel and the nearby SkiWelt were close to average with around 2.5m at resort level and between 5.5m and 6m up top.

In Italy, most resorts can also look back on an above average snow season. In the Dolomites, Arabba saw 4.1m - impressive for this relatively dry corner of the Alps where the resort level average is around 3.6m. It was the western resorts that really caught the eye though. Courmayeur, for example, clocked 9.3m at 2250m, the highest figure seen here since our records began in 2005-06.

Snowiest of all, however, and 'the snowiest resort in the Alps in 2017-18' was Cervinia, with 10.1m at resort level (2050m)- similar to the quantity recorded in Val Thorens in France - but an incredible 19.9m recorded up on the glacier at 3400m. So, in our book at any rate, it is the Italian resort takes the title this time around. 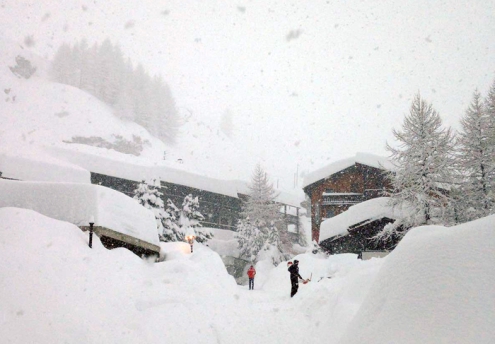 Cervinia was the snowiest resort in the Alps in 2017-18 – Photo: mountlive.com