The 2019-20 ski season will forever stand out for its premature ending due to the measures taken across the globe to combat the spread of Covid-19, rather than for snowfall figures. Indeed, the abrupt closure of resorts means that fewer figures are actually available for 2019-20 than in previous years.

Further data may emerge in due course, but in many cases snowfall totals are recorded by piste patrols, so the figures simply weren't collected from mid-March onwards where resorts had gone into lockdown.

That aside, in terms of weather and snow conditions overall, the 2019-20 Alpine ski season had three overriding themes: 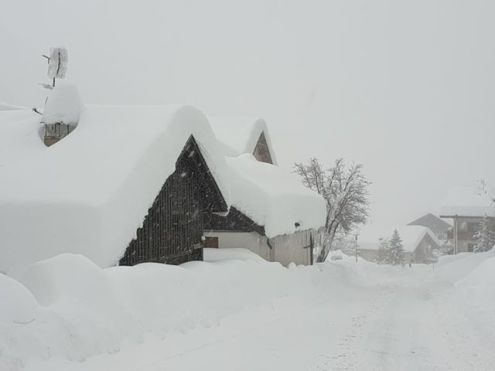 Serious early snowfall in the south-eastern Italian Alps. This is Sulden am Ortler – 18 November 2019 – Photo: kachelmannwetter.com

After yet another torrid summer, which brought the summer skiing season to a premature end in many Alpine resorts, the first significant snowfall of autumn arrived on 9 September, with 30-50cm of snow on some Austrian and eastern Italian glaciers (e.g. Hintertux and Passo Stelvio).

Sadly, this was not a prelude to a bumper early autumn on the glaciers. Although there were one or two additional high-altitude snowfalls in September and October, both months ended up being warmer and drier than average.

It was not until early November that the Alps saw their first really widespread and significant snowfall of the season. The main driver of the change to more wintry conditions being a huge storm system anchored in the Mediterranean, which delivered lots of snow to the southern Alps, particularly benefitting the central-southern and south-eastern Alps (e.g. St Moritz, Livigno and the Dolomites) where an excellent early base was laid. 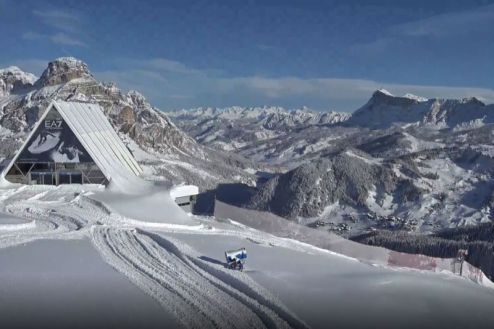 Big early snowfalls in the Dolomites. This is how Corvara looked on 14 November 2019 – Photo: dolomitisuperski.com

Some Austrian resorts also got off to a flying start, particularly those close to the Italian border (e.g. Ischgl, Obergurgl), but with one or two exceptions there was less snow the further north and west you were (e.g. Portes du Soleil, Bernese Oberland, Salzburgland).

One notable exception in the northern half of the Alps which had plenty of snow by mid-November was the Val d’Isère/Tignes area, thanks to storms spilling over from the nearby Italian border. 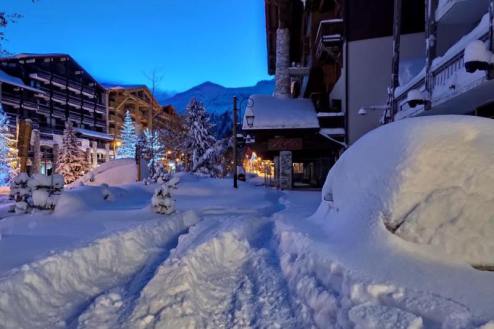 Val d’Isère was one of the few northern Alpine resorts to have excellent snow cover all the way to resort level by mid-November – Photo: Sebastien Truppa, 15 November 2019

The weather in the Alps remained very unsettled through the second half of November, with lots more snow in the south, this time favouring the southern French Alps (e.g. Serre Chevalier, Isola 2000) and some parts of the western Italian Alps (e.g. Monte Rosa, Cervinia). 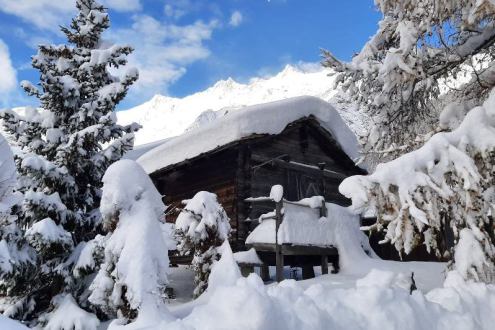 By early December, the southern Alps were enjoying one of their best starts to the winter in recent years, perhaps even in decades, with very snowy conditions almost everywhere, including the Italian Alps, the southern French Alps roughly south of Grenoble (e.g. Serre Chevalier, Risoul, Isola 2000), parts of the far south of Switzerland (e.g. Zermatt, Saas-Fee and St Moritz), and the southern Austrian Alps (e.g. Obergurgl, Nassfeld).

Some northern Alpine resorts were also in good shape, particularly the higher French ones like Val d’Isère, Tignes and Val Thorens. More generally, however, snow cover in the northern Alps was nothing special and indeed still very patchy in low and medium altitude resorts (e.g. Morzine, Villars, Adelboden, Kitzbühel, Lech and Zell-am-See).

The first half of December favoured the western Alps for snowfall, especially the French Alps, before mid-December saw a temporary deterioration of snow conditions in many parts of the Alps, particularly across the north (e.g. Bernese Oberland, Arlberg) where warm Foehn winds again proved a nuisance.

However, widespread snowfalls did return to the Alps before Christmas, meaning that snow conditions were generally excellent in most parts of the Alps over the busy New Year period, even if it did turn very mild. It was only in the lower resorts of the northern and north-western Alps (e.g. Villars, Morzine, La Clusaz) that the snow remained a bit thin. 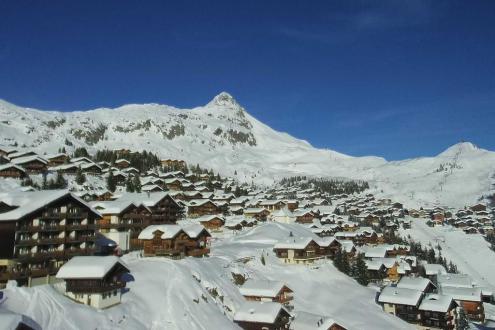 Snow conditions were generally good in the Alps over the New Year period. This was Bettmeralp in the Swiss Valais on 28 December 2019 – Photo: bettmeralp.ch

January saw more settled weather in the Alps, with just a couple of minor snow events, mostly across the northern Alps. While this may have been frustrating for anyone seeking powder, it was ideal for most recreational skiers, looking for sunshine and well-prepared pistes.

Snow depths generally remained pretty good across the Alps, and even excellent at high altitude and in most of the southern Alps. However, some of the lower resorts of the northern Alps (including Morzine, Gstaad and Adelboden) were still struggling to build a lasting base below 1200m or so.

The weather did turn unsettled again towards the very end of January bringing further snow to the northern Alps, though temperatures remained mild and turned milder still at the start of February with some damaging rain in places. 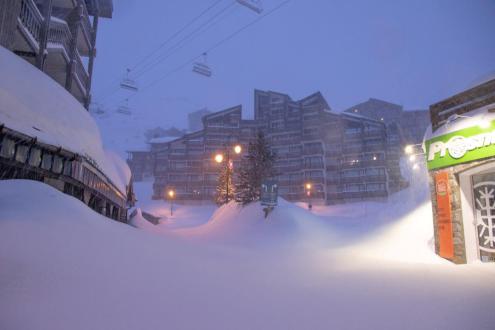 The high resorts of the western Alps had deep snow in late January. This was Val Thorens on 29 January 2020 – Photo: facebook.com/Valthorens.resort

February was a very mild month overall, with further snow at times (especially at altitude and in the north and west) but also some rain lower down, which exacerbated the difference in snow levels between the higher and lower resorts.

The weather finally turned colder towards the end of February, bringing further heavy snowfalls across the north and west. This time the snow fell to low levels though, leading to much improved snow conditions in long-suffering resorts such as Morzine, Megève, Gstaad, Villars and Adelboden.

The southern Alps again missed out on the heaviest snow, but most resorts here (e.g. Risoul, Sestriere, Livigno, Alta Badia) were still in decent shape thanks to the deep base that had been laid down right at the start of the season. 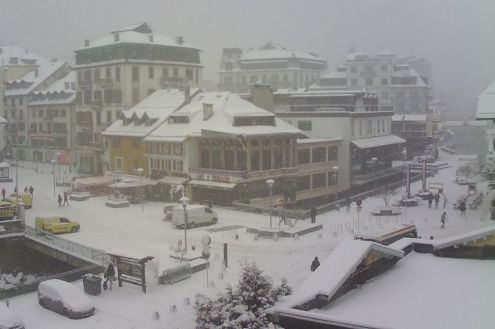 The weather in the Alps remained very unsettled in early March, when the heaviest snow again fell across the north-west, notably in France. Indeed, snow depths at high altitude in parts of the the French Tarentaise (e.g. La Plagne, Les Arcs) briefly approached record levels.

The weather then settled down mid-March with plenty of warm sunshine across the Alps. Easterly winds did bring colder air to all regions later in the month, with some snow falling to low levels in some parts of the eastern and southern Alps, notably in the Dolomites. The weather continued to be mostly fine in the west though.

Sadly, this colder weather came too late to be of any use to snow-sports enthusiasts, as all alpine ski resorts had closed by the middle of the month due to measures taken to halt the spread of Covid-19. 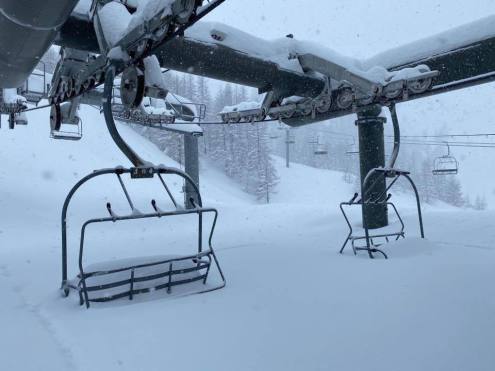 For what it’s worth, April was an exceptionally dry month, and again much warmer than average. So, had skiing continued, there would have been enjoyable spring skiing conditions in the higher resorts, even if the snow did quickly disappear lower down.

This point is of particular importance in seasons when the weather is changeable but mild, and frequent low-level rain can lead to greater than normal discrepancies in cumulative snowfall totals from top to bottom.

Finally, snowfall statistics for 2019-20 are often incomplete due the premature closure (mostly in mid-March) of resorts to combat the spread of Covid-19.

In the French Alps, the southerly resort of Isola 2000 clocked 4.65m before its early closure on 17 March, fractionally above its long-term average. Had the whole season’s figures been included, it would have been fractionally higher.

In the far north, Avoriaz recorded 5.89m at resort level (1800m), again before its early closure, considerably below its long-term average of around 7.5m. However, just a little higher up at 2200m they saw 8.91m, a very unusual difference for such a relatively minor shift in altitude, telling us a lot about how mild the season and that the rain/snow limit would have frequently sat somewhere between those two measuring points (i.e. between 1800-2200m). Note also that, down in the valley, Morzine (1000m) had one of its least snowy winters ever, with what appears to be less than 1m at resort level.

In the Tarentaise, Val d’Isère (1850m) had recorded 6.84m by the end of April, considerably more than it’s 5.5m average, partly explained partly by its altitude but more by its propensity to benefit from storms coming from both the north-west and the south-east (over the nearby Italian border). The snowiest resort in France this year, however, was its highest: Val Thorens (2300m), where 7.03m fell between November and April. 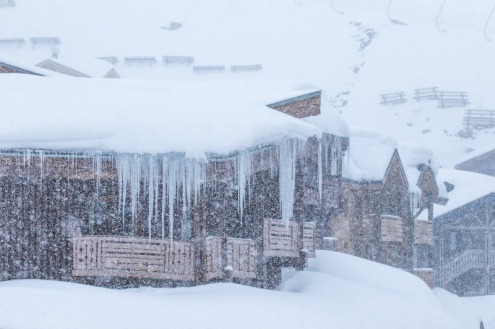 In the Italian Alps, snow conditions were excellent overall in 2019-20. This was Madonna di Campiglio in early March – Photo: funiviecampiglio.it, 5 March 2020

Most Italian ski resorts recorded above average snowfalls in 2019-20. In the far west, Courmayeur clocked 6.12m at 1700m and 8.3m at 2200m - considerably above its long-term average. Not too far away, high altitude Cervinia (2050m) had clocked about 5m when data stopped being collected in early March, and would probably have seen over 6m (a little above average) by the end of the season, even if April was virtually snowless.

Eastern Italian resorts also enjoyed a good season, with 4.14m at resort level in Arabba (600m) between November and April - even though more than half this fell in November - a little above its long-term average of about 3.7m. 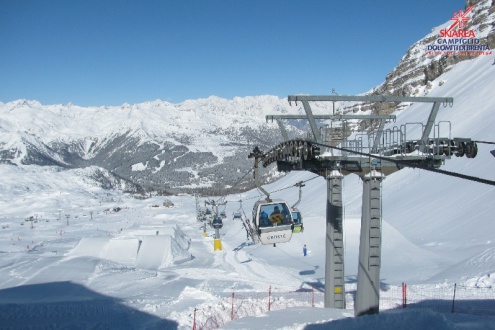 In the Italian Alps, snow conditions were excellent overall in 2019-20. This was Madonna di Campiglio in early March – Photo: funiviecampiglio.it, 4 March 2020

Snowfall in Switzerland in 2019-20 was generally a little below average in the east, but closer to or sometimes above average in the south and west, especially at altitude. Arosa (in the east) recorded 5.5m of snow at resort level (1800m) between November and April, a fraction below average while, further west, Verbier’s Ruinette station (2200m) saw 8.17m - considerably above its long term average of about 6m. 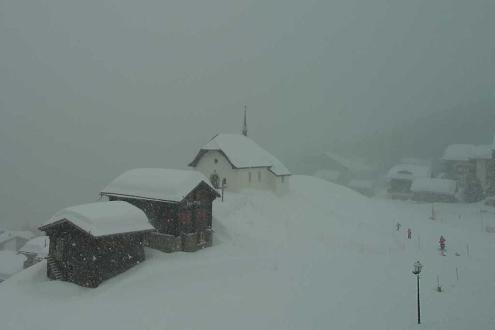 Austria, by contrast, saw below average snowfalls in 2019-20 everywhere apart from the far south (although we lack specific data for Carinthia/Osttirol for the time being). The lower resorts of the Salzburland and Tirol were the least snowy, with the Kitzbühel/Skiwelt area only seeing 1m or so in the valley at 700m (where its average is just over 2m), and just under 3m at 1800m (where you would expect closer to 5-6m). 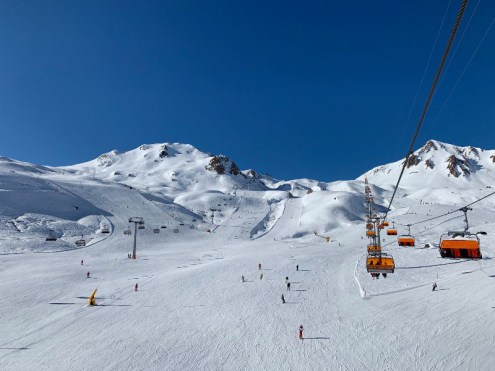 Snow conditions in high Austrian resorts such as Ischgl were generally excellent last season, but the picture was more mixed lower down – Photo: facebook.com/Ischgl.paznaun, 21 January 2020