For the third year in a row, early season snow conditions were exceptionally poor across the Alps. However, unlike last season, most resorts recovered to offer quite a decent winter, all things told.

The best overall snow conditions were in the higher resorts of the north-western Alps. Here, after an indifferent start, resorts such as Val d’Isère, Val Thorens, Chamonix, Avoriaz, Verbier and Mürren offered consistently good skiing from early January onwards.

The lower resorts of the northern Alps, such as Morzine, Villars and Kitzbühel were more affected by mild weather in the first half of the winter, but also recovered, with a relatively strong second half of their season.

The southern Alps suffered the greatest early snow shortages, with no significant snow until February in resorts such as Livigno, St Moritz and Selva. However, here (particularly in Italy) the drought was at least partially mitigated by comprehensive snow-making, which allowed a good number of pistes to remain open. What’s more, when the snow finally arrived in early February, it kept going, on and off, for the rest of the season.

Pre-season weather and snow conditions in the Alps were typically mixed in 2015-16. Expectations were raised as early as October, which turned out to be a reasonably snowy month (at altitude at least) with some excellent skiing possible on the glaciers. 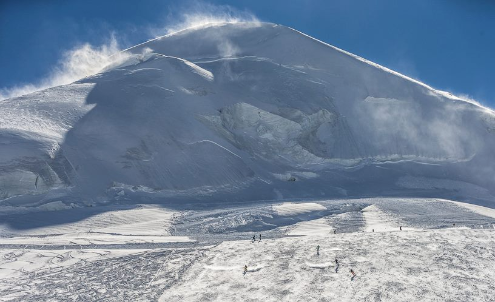 By contrast, the first half of November was exceptionally warm and sunny. Conditions on the glaciers remained pleasant, but any lower-lying snow quickly disappeared as freezing levels regularly topped 4000m.

Winter returned towards the end of November, with a big drop in temperature and some heavy snowfalls across the northern Alps. However, most of the southern Alps missed out and December saw a return to mild and mostly sunny weather, which would persist for much of the month. 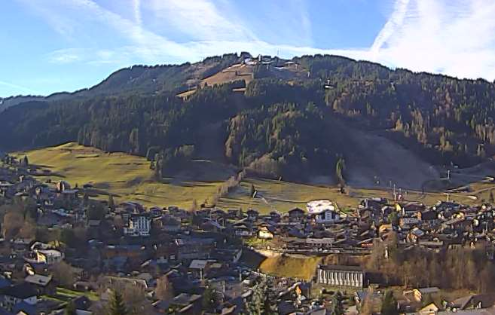 Almost no snow in Morzine in the run-up to New Year for the second year in a row - December 2015 - Photo: chilloutmountain.com

As Christmas approached it was still possible to find some decent piste skiing - both at altitude in the northern Alps (e.g. Val d’Isère, Verbier, Engelberg), and further south in areas renowned for their snowmaking capabilities (e.g. the Dolomites). Though this could not disguise the fact that for most ski resorts it was yet another very poor start to the season. 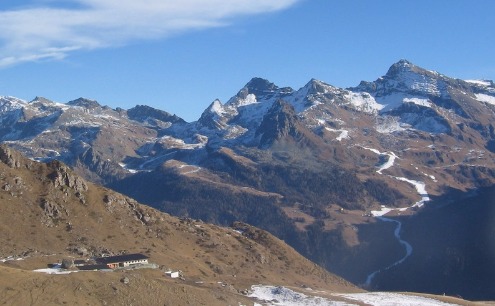 Early January finally saw significant snowfall across the north-western Alps, especially at altitude, where resorts such as Val Thorens, La Plagne, Avoriaz and Mürren were now secure for the season. Generally speaking though the picture was still very mixed, with a continued drought across much of the southern Alps and still sketchy snow conditions at low altitude further north. 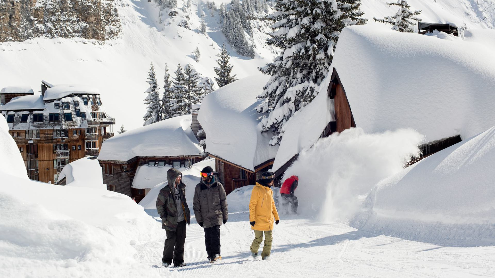 The “southern” drought which affected the southern French Alps (e.g. Risoul, Isola 2000), the Italian Alps away from the north-west (e.g. Milky Way, Dolomites), and some southern parts of Switzerland and Austria (e.g. St Moritz and Nassfeld), was one of the most severe ever seen in these parts and lasted through much of January. 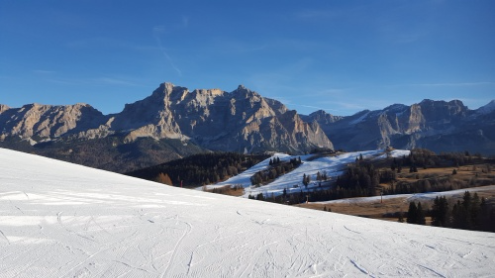 An early season lack of snow in the Sella Ronda region was saved by state-of-the-art snow-making - Photo: planetski.eu

Snow-making efforts allowed on-piste skiing to continue (nowhere was this better illustrated than in the Dolomites), but any serious off-piste was completely out of the question until February.

Across the northern half of the Alps - including the far north-west of Italy (e.g. Courmayeur) - it was a very different story, with regular January snowfalls (especially mid-month) contributing to some excellent snow conditions. 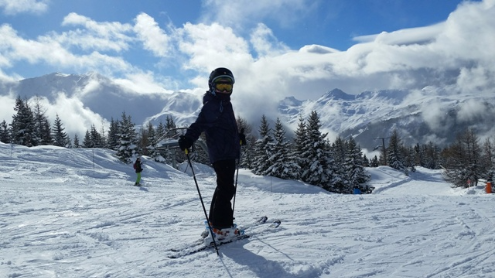 Only on the very lowest slopes (such as in Morzine) was the snow still a bit too thin for comfort, exacerbated by the return to milder conditions later in January.

The latter half of the month saw a sharp rise in temperature again, before the southern Alps were hit by another wave of storms later in the month. 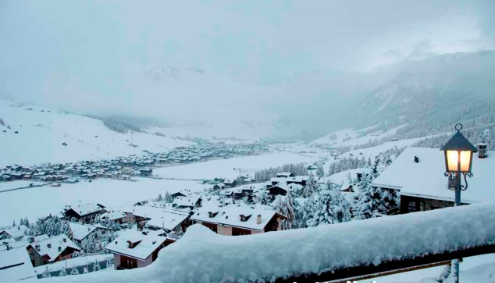 Early March saw a return to heavy snow for the north, with conditions in the Alps generally as good as they had been all season. There were plenty more snowfalls to come throughout March (both in the north and the south) before it turned drier and eventually warmer towards the end of the month. Overall, however, March was a cold month and one which offered the most consistently good snow quality of the season.

April started mild with a rapid deterioration in snow cover and quality at low altitude. However, it did turn colder later in the month, with further heavy snowfalls at altitude, also to much lower elevations at times. In complete contrast to the way things had started, the season therefore ended on a wintry note, even continuing to snow well into May - often to low altitudes. 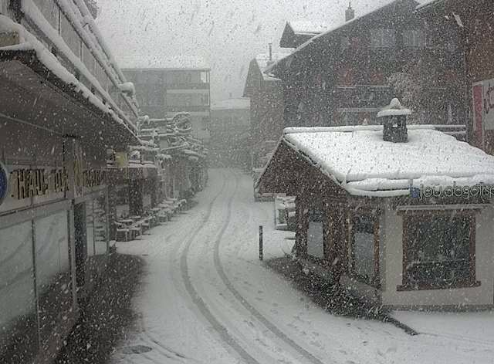 It was a snowy May for many parts of the Alps, including Saas-Fee, Switzerland - May 2016 - Photo: saas-fee.ch

First of all, a little word of caution regarding snowfall statistics in the Alps! Unlike in the US, there is no real culture for collecting and comparing snowfall data in ski resorts on this side of pond. With a bit of digging, a number of figures are available but many of these refer to resort level which means they are unlikely to be very indicative of the ski area as a whole. Furthermore, snowfall average is only one aspect of the overall snow quality equation, so should certainly not be regarded as the most important factor when assessing snow reliability in any given resort.

The winter of 2015-16 ended up fairly normal in terms of snowfall averages across the season as a whole. However, this masks the fact that most resorts got off to a very slow start with some southern resorts not seeing any significant dumps until early February.

Generally speaking, it was the north-western half of the Alps that saw the most snow. By this we mean the northern French Alps (e.g. Chamonix, Avoriaz), most of the Swiss Alps away from the far south and south-east (e.g Verbier, Crans Montana, Engelberg), the far north-west of Italy (e.g. Courmayeur) and the far west of Austria (e.g. Lech).

Between November and April, Arc 2000 saw 599cm of snow (around average), while Val d'Isère saw 619cm (a little above average). However, Avoriaz saw 792cm (a fraction above average), meaning it was again (as is often the case) the snowiest ski resort in France.

In north-western Italy, Courmayeur received 625cm at altitude (2250m), considerably above average. Meanwhile, across the border in Switzerland, Zermatt saw 350cm and Verbier 717cm (at 2200m), in both cases around 15-20% above average.

Snowiest of all in the Alps, however, at least close to resort level, was Austria’s Warth-Schröcken, which saw 884cm, even if this was below its longer term average of 1050cm (the highest average snowfall for a ski resort in the Alps). 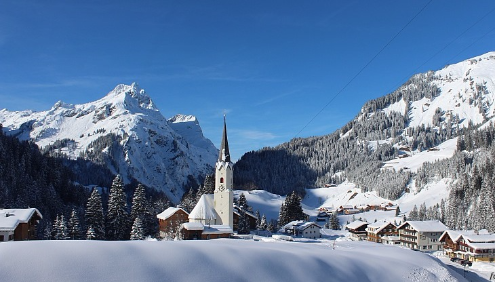 Snowiest resort in the Alps was (at resort level at least) perennial winner Warth-Schröcken - Photo: warth-shroecken.at

By contrast, the lower resorts of the northern Alps were generally below average, not so much for lack of precipitation, but due to mild temperatures which meant there was plenty of rain, rather than snow. Austria’s Skiwelt region saw around 1.5m of snow at resort level (700m), and just over 3m at 800m - in both cases, considerably below average.

The southern side of the Alps (away from north-western Italy) suffered a severe drought early in the season, but recovered well, with 345cm in Arabba (a fraction below average) and 543cm in Passo Tonale (close to average).

The main conclusions we can draw from the 2015-16 Alpine season are: