The weather in the Alps is very mild right now and is set to remain on the warm side for the foreseeable future. Inevitably this means that much of last week’s snow has now melted, especially across the northern Alps where the Foehn wind has been blowing.

It’s not all bad news though. Last week’s storms did bring a huge amount of snow to the high border areas between Italy and Switzerland meaning that, at altitude at least, there is now a base in resorts such as Zermatt, Saas-Fee and Cervinia. However, glaciers aside, the vast majority of Alpine resorts have little or no snow with no sign of a proper return to winter any time soon. 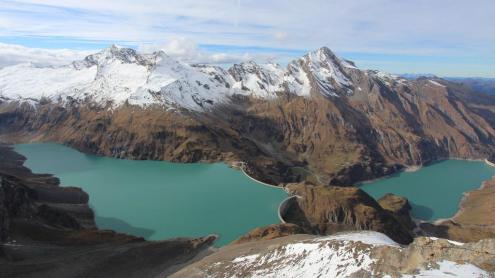 It’s way too early to be shouting about the snow in the Alps. This is the view from Heinrich-Schwaiger-Haus near Kaprun in the northern Austrian Alps – 7 November 2018 – Photo: bergfex.at

So, should we be worried?

The short answer is - not really. It is absolutely normal for snow to come and go at this time of year and some of the very best winters have not really got going until well into December. It would actually be quite unusual for there to be decent snow cover across the majority of the Alps at this stage of the season.

Here’s a run-down as to how snow conditions are looking right now in the Alps area by area:

The only ski area currently open in the French Alps is the Grande Motte glacier above Tignes. The weather here is mixed right now, but there is plenty of snow so conditions are pretty good in theory. However, a rapid thaw at resort level has scuppered any short-term hopes of opening the ‘Double M’ run down to Val Claret.

That said, more snow fell in the Val d’Isère/Tignes region last week than in most of the French Alps which means that some sort of non-glacial base is likely to be in place (at altitude) for the official opening of L’Espace Killy on 24 November 2018. 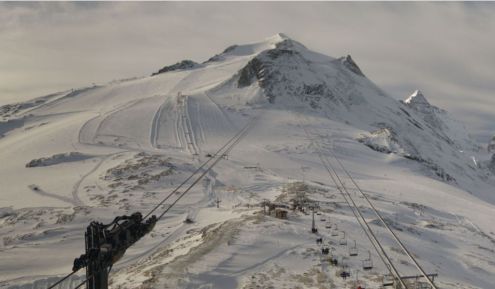 Good snow on the Grande Motte glacier above Tignes but at resort level it is melting fast – 7 November 2018 – Photo: tignes.net

The warm temperatures have also sent the snow-line scurrying back up the mountain elsewhere in the Alps, with little hope of any serious non-glacial openings any time soon.

Val Thorens hopes to open on 17 November, and probably will to some extent (with artificial help) regardless of the weather between now and then. However, as you can see from the photo below, cover is very thin so more natural snow would be welcome. 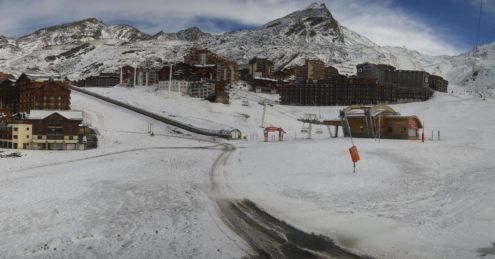 Only a thin layer of snow for now in Val Thorens – 7 November 2018 – Photo: valthorens.com

Swiss resorts close to the Italian border saw some of the biggest snowfalls from last week’s storms. Leading the way are Zermatt and Saas-Fee where more than 2m of snow fell at altitude. Warmer temperatures may have melted most of the snow lower down but there is now a lasting base on the upper half of both these ski areas (as well as on the glaciers of course), at least where it’s not too rocky.

The only problem this week has been the weather, which has been mostly cloudy and will continue unsettled right through until the weekend, with further snow showers at altitude. Expect further poor visibility and lift closures at times. 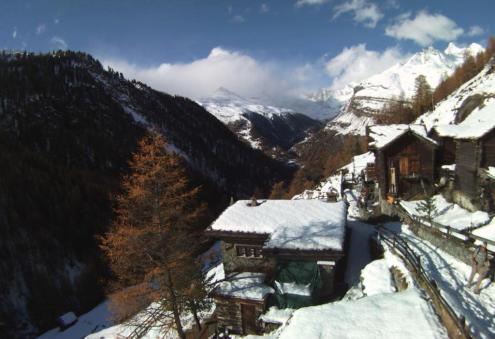 Still plenty of snow at altitude in Zermatt, even here at 2000m in Findeln – 7 November 2018 – Photo: apartment-zermatt.ch

Elsewhere in Switzerland you can also ski (weather permitting) on the Diavolezza glacier near St Moritz - where they also had a lot of snow last week - and at Glacier 3000 near Les Diablerets. The Titlis glacier above Engelberg hopes to reopen on 17 November 2018.

In terms of non-glacial snow cover, the recent warm Foehn winds mean that there is now very little snow on the northern side of the Swiss Alps, where most resorts are completely green below 2200m (e.g Villars, Grindelwald). That said, Verbier (just about classified as being on the northern side of the Alps) is managing to operate a couple of runs at weekends only in the Lac des Vaux area.

Further south there is more snow – with quite a lot at resort level in St Moritz (1800m), for example – but it is also melting here below 2200m or so.

In short, very few Swiss resorts can claim any serious non-glacial base as yet. There will be a bit more snow for the high border areas between Switzerland and Italy over the next few days but most Swiss ski areas will have to wait some time for a serious return to winter.

Most Austrian glaciers are open (weather permitting) and in pretty good shape with the most extensive skiing in Hintertux, Stubai, Kaprun and Sölden.

However, warm winds have eaten most of the snow lower down which means that there is almost no meaningful non-glacial base laid down as yet. One of the few exceptions is Obergurgl where natural snow on the upper half of the mountain may now survive until opening on 15 November. However, unless there is serious snow between now and then (which looks unlikely) then they will need considerable artificial help.

Closer to the northern ridge of the Alps (e.g. Lech, St Anton) the Foehn has melted almost all the snow, even at higher altitudes. 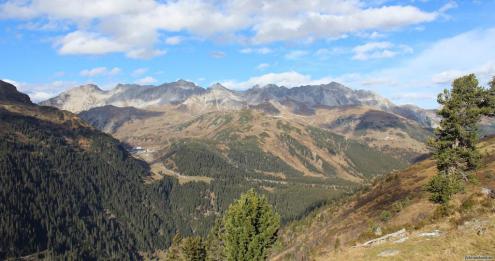 It’s all green again in the northern Austrian Alps. This is St Anton – 7 November 2018 – Photo: foto-webcam.eu

Italian ski resorts have seen the brunt of the bad weather over the last week or so, but it hasn’t been cold, so while there has been plenty of snow at high altitude there has also been lots of rain lower down.

The stand-out resort at the moment is Cervinia, where over 2m of snow has fallen up top since the beginning of last week. It hasn’t been much use to skiers yet though as the area has frequently been closed and/or fogbound, but if the weather lets up you can now ski down below the glacier to Plan Maison at 2500m.

Now that Passo Stelvio’s summer skiing season has closed, the remaining options in Italy right now are the glaciers at Val Senales, Passo Tonale and a tiny area of non-glacial skiing at Sulden-am-Ortler. However, once again the bad weather this week has made conditions challenging. 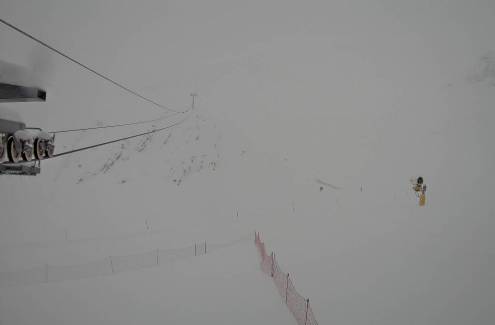 Lots of snow but also lots of bad weather right now at altitude in the Italian Alps. This is the Presana glacier near Passo Tonale – 7 November 2018 – Photo: pontedilegnotonale.it

See Today in the Alps for regular updates﻿