Last month’s weather was relatively ‘normal’ in the Alps, with spells of warm sunshine interspersed with cooler, more unsettled interludes which brought a little high-altitude snow here and there.

The most significant snow fell in the eastern Alps (i.e. Austria) where the glaciers are now in reasonable shape. Further west, snowfall may have been lighter and more sporadic so far this Autumn but the situation here is also steadily improving.

As in most years, Austria is the best bet for skiing in the Alps in early October, with 4 glaciers already open and more to follow soon.

Hintertux currently offers the best snow conditions and greatest extent of skiing in the Alps with 20km of pistes and 45cm of settled snow on the glacier.

Sölden has 4km of pistes currently in operation with more planned this weekend. Snow depths on the glacier currently stand at 63cm.

The Stubai glacier has 2 runs open today and is reporting a snow base of 25cm.

The Pitztal glacier also has 2 runs open today with a snow base of 30cm.

The Kaunertal glacier has 4 runs open today and is reporting a snow base of 20cm.

The Kitzsteinhorn glacier above Kaprun plans to open on 12 October 2019. 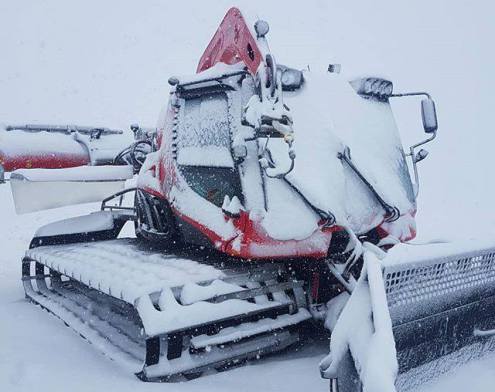 The French Alps currently have no lift-served skiing available, as the planned opening of the Grande Motte glacier above Tignes (on 28 September 2019) had to be postponed due to a lack of snow. Light snowfalls have improved the situation in recent days but at the time of writing there is still no word on when the glacier will re-open.

Les 2 Alpes hopes to open its glacier from 26 October to 3 November 2019 for half-term but has been unable to do so in the last two seasons due to a lack of snow. Watch this space! Otherwise no other French ski resort has any plans to open until the “main” season which, snow permitting, will kick off with the opening of Val Thorens on 23 November 2019. 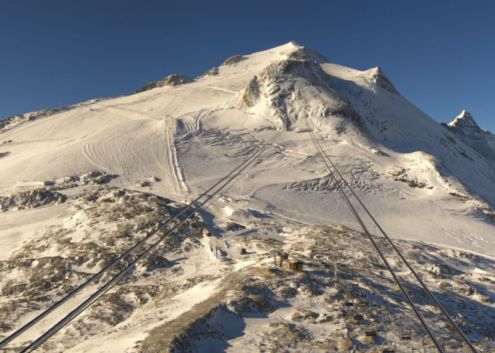 Snow cover has been improving on the Grande Motte glacier above Tignes in recent days but there is still no word on its postponed opening – Photo: tignes.net, 3 October 2019

Passo Stelvio near Bormio has the deepest snow base in the Alps (190cm) and can offer 6km of pistes, while Val Senales has 2km on a much more modest 15cm!

Switzerland has two good glacier options right now, with more openings coming soon. Saas-Fee and Zermatt can both offer around 18km of runs (weather permitting) with upper bases of around 50cm.

Engelberg plans to start operations on its Titlis glacier on 12 October 2019, but this has yet to be 100% confirmed.

See Today in the Alps for regular updates﻿