So, just how bad are snow conditions in the Alps? This is a question we have been asked numerous times this week, and the answer is not straight forward!

Yes, there is a little fresh snow at altitude across the northern Alps today, but there is no doubt that snow levels across the Alps are considerably below where they should be for mid-December.

But exactly how bad things are depends a lot on your expectations and where in the Alps you are talking about. As is the norm when snow is in short supply, there is a lot of hysteria and misinformation doing the rounds on social media, so here is our impartial and facts-based assessment of how we see the snow situation in the Alps right now…

Where has the most snow?

The areas with the deepest snow cover at the moment are the northern French Alps and the northern and western Swiss Alps (e.g. Val d’Isère, Courchevel, Chamonix, Verbier, Mürren, Engelberg). 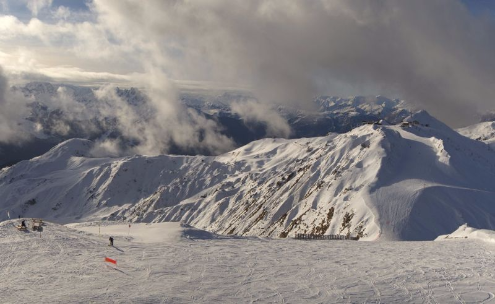 The high resorts of the northern French Alps are still doing OK. This is La Plagne - Photo: laplagne.com

These areas were briefly above par back in late November, but despite having the deepest cover in the Alps, are now some way below again, with very little snow below 1600m. Just check out the image from the Swiss Snow Institute below, which expresses snow depths as a percentage of the long term average.

But bear in mind that this was last updated six days ago and the situation has since deteriorated further. 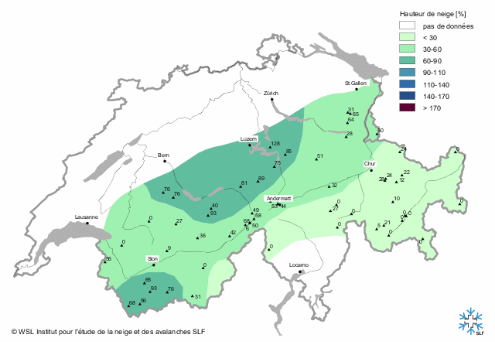 Snow cover is below average right across Switzerland, as shown by this SLF chart (last updated 10.12.2015) showing snow depths as a percentage of the long term average - Image: slf.ch

Sure, the off-piste is very limited right now, even in the areas with the most snow, but lots of people have been reporting some very good piste skiing at altitude during the recent good weather. High season crowds will change the game somewhat, but they won’t really kick in until after Christmas.

Remember that the sun is very weak at this time of year, so the pistes often stay firm even when freezing levels are high, especially on north-facing slopes.

The worst thing that can happen when snow is in short supply is for it to be foggy and/or rainy. Fortunately we haven’t seen a huge amount of rain recently and while the sun is out, most regular skiers are happy, even if the snow-pack is very modest. 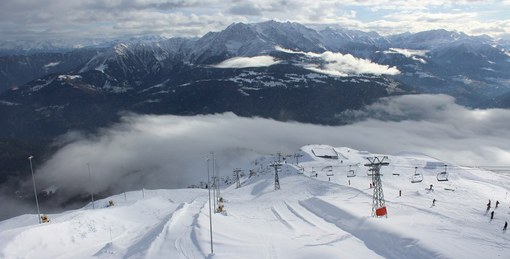 Where isn’t doing as well?

Elsewhere in the Alps there is less snow, but there is still some perfectly good piste skiing available.

Regular followers of weathertoski will know that there is little or no natural snow across vast swathes of the southern Alps, which includes most of Italy. However, many Italian resorts - and there is no better example than those in the Dolomites (e.g. Selva, Corvara) - have snow-making down to a fine art, and have opened hundreds of kilometres of pistes, seemingly against the odds.

These areas are rightly exasperated by media stories of “no snow in the southern Alps” without any mention of their fantastic man-made capabilities. The truth of the matter is that the Dolomiti Superski region has 487km of pistes open - the greatest concentration in the Alps right now! 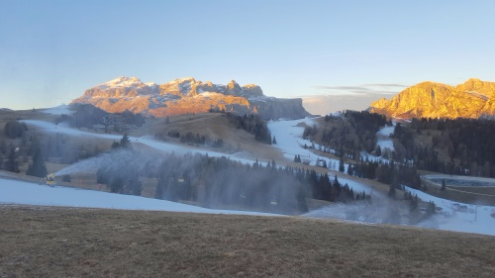 However, all these regions also have a good number of pistes open, thanks to their monumental snow-making efforts. For example, 47 of the 70 lifts are open in the Saalbach-Hinterglemm area, despite upper snow depths of just 30cm. 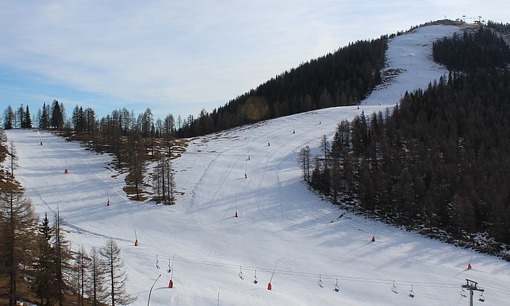 Austria also has state of the art snow-making facilities. This is Bad Kleinkirchheim - Photo: badkleinkirchheim.at

The question now is what happens as we approach the busy Christmas/New Year weeks?

As we mentioned earlier, people’s skiing experiences often stay positive in times of little snow so long as the sun is out and the crowds stay away.

Looking at the weather forecast for the Alps over the next 10 days or so, one thing we can be absolutely sure of is that the weather will stay mild, even very mild at times. There will also be plenty of sunshine, with just the odd weak front flirting with the northern Alps, meaning a little light rain (snow at altitude) is possible from time to time. However, it won’t be significant and, generally speaking, there will be lots of fine weather, especially in the southern Alps.

So the snow situation in the Alps won’t improve, but at least there will be some sunny weather to enjoy at times. The bigger concern is what will happen once the volume of skiers starts to increase. This shouldn’t be too bad during the Christmas week, but could become more of an issue on 26 December when the crowds descend en masse for the New Year.

See Today in the Alps for daily updates﻿