So December is almost upon us, which means it is now less than three weeks until Christmas week, traditionally regarded as the start of the high season.

Anyone keeping even half an eye on proceedings will know that there has been some snow. But how much do we really have for the time of year? Where is doing best, and where still has it all to do?

Let's start by looking at where has the most snow...

However, the further south-east you are in Switzerland, the less snow there is, with woefully thin cover in the Engadin (e.g. St Moritz). Note that Zermatt and Saas-Fee (technically in the western Swiss Alps) are also below average, although far better off (for now) than the resorts of the Engadin. 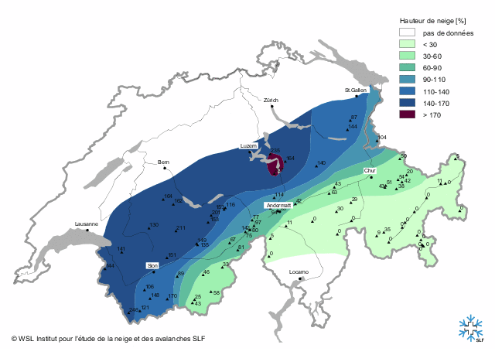 Snow cover is best in the northern and western Swiss Alps, as shown by this SLF chart showing snow depths as a percentage of the long term average - Image: slf.ch

Next up are the northern French Alps, where snow depths are by and large close to average for the end of November. This region includes resorts such as Avoriaz, Chamonix, Val d’Isère and Courchevel. 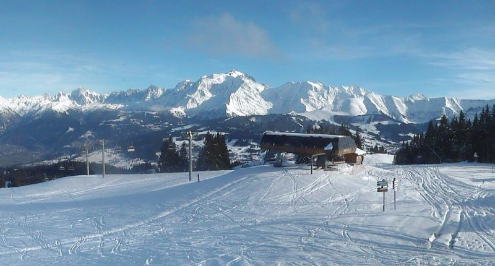 Two other regions that are not far off average for the time of year (though perhaps a bit behind the curve) are the far west of Austria and the far north-west of Italy. By the far west of Austria, we mean the western Tirol (e.g. St Anton) and the Vorarlberg (e.g. Lech, Warth-Schröcken). By the far north-west of Italy, we mean Cervinia, Courmayeur and La Thuile.

All other parts of the Alps, to some degree, have less snow than average for the time of year. Italian ski resorts (apart from those exceptions mentioned above) generally have very little snow, both in the far south-west (e.g. Sauze d’Oulx) and the central and eastern Italian Alps (e.g. Livigno, Selva, Cortina). 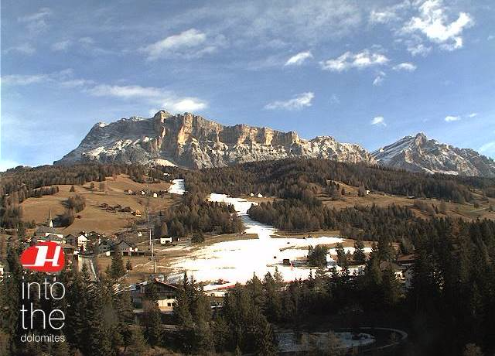 Very little natural snow yet in the Dolomites. This is Alta Badia - Photo: holimites.com

Most Austrian resorts are also below par for the time of year, though conditions here are more variable. As we have already mentioned, west is best (particularly the Vorarlberg), but snowfalls have been more erratic further east, with only the highest resorts securing anything like a convincing base. 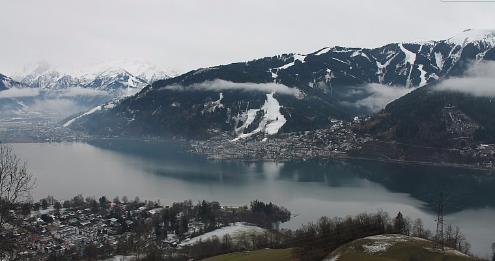 Snow levels as yet unconvincing in the lower Austrian resorts. This is Zell-am-See - Photo: foto-webcam.eu

So, broadly speaking, we can conclude that the northern half of the Alps are doing OK for now and, at altitude at least, the base is more or less secure for the early part of the season. By contrast, the southern half of the Alps has very little snow and plenty of work to do. Furthermore, the weather in the Alps is expected to be very mild this week, which will probably hinder snow-making to some degree.

Some words of caution...

It is still very early in the season and things can change very quickly - both ways. There is, for example, still plenty of time for a major snowfall to transform the situation in the southern Alps before Christmas.

Conversely, it wouldn’t take very long for snow depths in the northern and western Swiss Alps to dip back towards (or even below average) if it remains dry and mild for any length of time.

In short, snow conditions are always going to be volatile at this time of year - so stay tuned to our daily updates on weather and snow in the Alps. It could be very different just a week or two down the line!

See Today in the Alps for daily updates